The vision is yet for its appointed time

The vision is yet for its appointed time

The righteous one will live by reason of faith.—Gal. 3:11.

We must never doubt that if we follow God’s direction, it will turn out for our good. It is vital that we put faith in the One who can really help. Paul reminds us that God is “the one who can, according to his power that is operating in us, do more than superabundantly beyond all the things we ask or conceive.” Jehovah’s servants do all they can to carry out the will of God, but knowing their limitations, they trust in Jehovah to bless the outcome. Are we not glad that our God is with us? Can we expect our requests for more faith to be answered? The Bible assures us that we can when “we ask according to [God’s] will.” Clearly, Jehovah is pleased with those who put their complete trust in him. Jehovah will answer our request for more faith, and our faith will grow exceedingly, leading to our being “counted worthy of the Kingdom of God.”

In writing to the Galatians Paul quoted from the prophecy of Habakkuk, which itself is a vision for the time appointed. In context it says: “For the vision is yet for its appointed time, and it is rushing toward its end, and it will not lie. Even if it should delay, keep in expectation of it! For it will without fail come true. It will not be late! Look at the one who is proud; He is not upright within himself. But the righteous one will live by his faithfulness.” —Habakkuk 2:3-4

The Watchtower occasionally quotes this passage in Habakkuk in exhorting Jehovah’s Witnesses to keep in expectation of the coming great tribulation. But as regards the meaning of the vision itself, the Watchtower has very little insight. While correctly asserting that the appointed time is yet in the future, contradictorily, the prophets of Bethel suppose that the details of the vision are already playing out. To underscore their lack of clarity, the February 1, 2000, Watchtower published a series of study article on Habakkuk. The third article states the following:

The third woe announced through Habakkuk takes up the issue of bloodguilt. Says Habakkuk 2:12: “Woe to the one that is building a city by bloodshed, and that has solidly established a town by unrighteousness!” In this system of things, unrighteousness and bloodshed often accompany each other. Notably, the world’s religions have been responsible for the most heinous bloodbaths of history. We have only to mention the Crusades, which pitted so-called Christians against Muslims; the Catholic Inquisition in Spain and Latin America; Europe’s Thirty Years’ War between Protestants and Catholics; and the bloodiest of them all, the two world wars of our century, both of which started in the realm of Christendom.

While it is undoubtedly true that Christendom has accrued a massive amount of blood guilt over the centuries, is that the bloodshed Habakkuk is addressing? No.That is because the atrocities outlined in Habakkuk have not been committed yet. That is what is to occur when the appointed time for the vision to come alive arrives. Then, the antitypical Chaldean will attempt to reach his goal. Which is? Total world domination. That is what the vision of Habakkuk portrays. The Chaldean pictures the last kingdom —the eighth king.

It is in fact Jehovah’s Witnesses who do not believe the vision. They cannot do so. It is not permissible. It is to them that Jehovah speaks in the opening words of the prophecy: “Look among the nations and pay attention! Stare in amazement and be astounded; for something will happen in your days that you will not believe even if it is told to you.”

What is it that Jehovah’s Witnesses consider to be unbelievable —incredible? Well, considering that virtually everything the Watchtower has taught regarding prophecy is wrong, at least in terms of the modern fulfillments, Jehovah’s Witnesses have no basis to believe that the entire world order is going to be overturned and a global, communistic system is going to be imposed upon every nation.

After all, according to the Watchtower the king of the north has already entered into his final campaign since 1914. The fierce-looking king who takes down the princes of the Prince of princes has already done his deed. He has already brought the mighty ones of this world to ruin —apparently sometime back during the Second world War. The wild beast has suffered its mortal wound and miraculously revived. The little horn that uproots three rival horns already accomplished that back when the Spanish Armada was wrecked by the gales of the North Atlantic. The eighth king came to life back when the League of Nations was formed. And perhaps most nonsensical, the northerner of Joel that devours the world has already come on the scene in the form of Jehovah’s Witnesses!

No, the Watchtower has taken away all biblical basis for anticipating the sort of holocaust that Habakkuk envisioned. That is why it is unbelievable. Not only that, but Jehovah’s Witnesses are woefully uninformed as to the Anglo-conspiracy to rule the world, which is the basis for understanding the activities of the king of the north.

According to the words of God issued through Habakkuk the Chaldean is God’s appointed executioner. Here is what Habakkuk said: “O Jehovah, you appointed them to execute judgment; My Rock, you established them for punishment.”

According to the Watchtower the Chaldean typifies the Nazis and Soviets and other tyrants that have come and gone. But is that sensible? Did the Nazis serve as God’s instrument to punish and execute judgment upon the Jews and even Jehovah’s Witnesses? What utter nonsense!

As it stands presently, a new world dynamic has come into operation. It is the alliance of nations grouped around Russia and China, which is extending to key nations such as Iran, Turkey and even Venezuela. China has set up a banking system to replace the IMF and Bank of International Settlements. As of a few weeks ago China, the world’s largest importer of oil, has dropped the petrodollar and is offering a 100% gold-backed Yuan. As more and more nations move away from the Dollar the United States will be inundated with a Tsunami of unwanted Dollars. Hyperinflation, once ignited, will render the venerated Greenback worthless in a matter of days. The economy will crash. It is virtually unavoidable. Millions of people will be left holding an empty bag.

And most assuredly, the collapse of the Wall Street system will take down the whole shebang. The quadrillions of derivatives will simply crush everything. The only way for the European imperialists to stay on top is a controlled demolition —to blow up the system and replace it with something they control. Inevitably, the carnage will be immense. But in that way the nations will be caught up in the fisherman’s net like hapless fishes, which is why Habakkuk asked: “Why do you make man like the fish of the sea, like creeping things that have no ruler? All of these hauls up with a fishhook. He catches them in his dragnet, and he gathers them in his fishing net. That is why he rejoices greatly. That is why he offers sacrifices to his dragnet and makes sacrifices to his fishing net; for by them his portion is rich, and his food is choice. Will he then keep emptying out his dragnet? Will he go on slaughtering nations without compassion?” 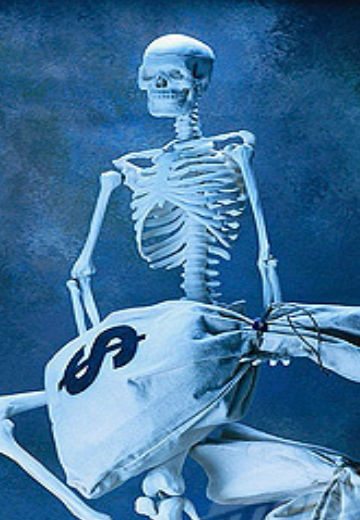 Enslaving mankind has always been the intended purpose of the money masters and the Devil who gives his kingdom to whomever he wises. Unbridled capitalism is merely a means to an end. The end game is total dispossession of everyone. A form of global collectivism is what Habakkuk envisioned for the onrushing time appointed. That is what is meant by the following: “Indeed, because the wine is treacherous, the arrogant man will not reach his goal. He makes his appetite as large as the Grave; he is like death and cannot be satisfied. He keeps gathering all the nations and collecting for himself all the peoples.”

“He” in this instance is surely the upper tier of ultra-wealthy bankers and monarchies, the globalist schemers who control 90% of the world’s wealth. For example, the Rothschild banking family is not even listed on Forbes top billionaires because they are not billionaires —their wealth is measured in trillions! And the The British Monarchy control trillions too. (Link –Who Owns the World?)

But owning 90% is not enough. Drunk with their own power and arrogance, they want it all. Hence, the push to have it all is the means by which Jehovah will punish the nations when he allows the globalists to destroy the present democratic system and set up their new world order and implement a final solution to liquidate a sizable percentage of the population, as the scripture goes on to say: “Woe to the one who makes evil gain for his house, so as to set his nest on the height, to escape the grasp of calamity! You have plotted shame against your house. By wiping out many peoples you sin against yourself.”

Although the elites have their luxury bomb shelters and fully intend to survive the holocaust they are about to unleash, Jehovah will not allow them to reach their goal. That is because concurrent with the time the elites set into motion their scheme to destroy civilization Jehovah will reveal the sons of God. Their presence on earth will bring down the wrath of God. That is why the third chapter of Habakkuk goes onto foretell: “Sun and moon stood still in their lofty abode. Your arrows went out like the light. The lightning of your spear was brilliant. You marched through the earth with indignation. You trampled the nations in anger. You went out for the salvation of your people, to save your anointed one. You crushed the leader of the house of the wicked.”

Considering the nightmare about to come to life we may better appreciate why Jehovah said his righteous one will live by means of his faithfullness.

For a more detailed consideration of the prophecy of Habakkuk as well as the king of the north and related prophecies in Daniel and Revelation see the book Jehovah Himself Has Become King.