Vaccinations and the end of the world

Vaccinations and the end of the world

Question: Robert, you’ve spoken about the mark of the beast before, that it is symbolic. Obviously, the eighth king hasn’t risen, but things have changed since your article was written and reading the other posts about QR codes on the forehead, where should we stand on this, and will Jehovah tell us about the mark or is it for us to see? And what if we did get the vaccine before all of this came out? Vaccine passports was the wake-up for me, but for health reasons we had the vaccine before any of this came out. Since waking up and researching I now realize we would be better off not having the vax.

The last article on the topic was posted in February 2021, entitled: Is the Covid Vaccine the Mark of the Beast?  And, as you mention, it focused on the context of the 13th chapter of Revelation regarding the seemingly fatal wound inflicted upon one of the heads of the seven-headed beast. While the Watchtower has explained the death and miraculous recovery of the beast and the 666 marking into meaningless nothingness, sound reasoning indicates the prophecy has not been fulfilled yet. That being the case, contrary to what Jehovah’s Witnesses have been deluded into believing, neither has anyone been marked with the symbolic 666 yet either.

But you are right. A lot has changed over the past few months. It seemed that the pandemic was winding down but now there is a maniacal push for universal vaccination with sanctions and punishment for those who refuse. Covid passports? Why? So, the aspect of putting people under compulsion is undeniably there, as Revelation 13:16 makes mention. Incredibly, just yesterday the president of the United States demanded that the 80 million unvaccinated citizens had better start taking the shots—or else!

The vaccination mandate is especially worrisome because of the nature of the vaccines being used. For one thing, the injections do not provide full immunity. The majority of deaths from Covid are among those who have been vaccinated. In fact, the nations with the highest rates of vaccinated people are now experiencing the most new infections from the so-called Delta variant. One such nation is Israel. It turns out, there is no such thing as “full immunity.” Now vaccinated persons are awakening to the reality that they must regularly take booster injections to maintain their fully vaccinated status. But if vaccinated persons are vulnerable to Covid what is the point of the immunization campaign? It doesn’t make any sense from a health standpoint. There must be something else going on.

Besides the fact that at least 30,000 deaths worldwide have resulted from the initial injections, a figure that is surely low due to the fact that the mRNA cocktails are causing blood clots that are resulting in heart attacks and strokes and organ failure, which are not being attributed to the injections, but what shall be the results of taking a booster shot every six months? It cannot be healthy. More than likely millions of people will die as a result of the biannual booster injections—assuming it is rolled out on a large scale. Surely, when the death toll becomes obvious people will simply refuse to take the boosters.

The most troubling aspect of the vaccination blitz is that the injections are believed to contain graphene oxide. What is graphene? Graphene is a material that is being applied in microchips. The new technology is vastly superior to silicon chips. Nano graphene can be used to create brain circuitry that may be beneficial to Parkinson’s suffers and in other brain disorders. But why is it in the vaccines that are being injected into healthy people?  Natural News has an interesting article on neuroelectronics.

Not surprisingly, the fact-checkers have debunked the graphene vaccine story. But everything related to Covid is a lie. There are safe and effective treatments for Covid. The fact-checkers say there are not. This past week the media published a totally fabricated story to discredit ivermectin. Natural immunity is far more effective than injections. Science doesn’t matter.  You must be injected. The social media giants disallow any mention of alternative treatments or the dangers of mRNA. Obviously, there is an agenda and it has nothing to do with protecting our health.

There is no doubt Covid was created in a lab and more than likely intentionally released. The ensuing pandemic was greatly exaggerated by various means to amplify the panic for the purpose of imposing the mRNA vaccine upon the world. But why?

As far as the mark of the beast, the vaccines—as ineffective, dangerous, and unhealthy as they may be— taking the injections does not compromise one’s worship. Keep in mind that the mark is given to those who worship the image of the beast that recovered from the fatal wound. Most people have gladly taken the shots with the expectation of protecting themselves from Covid. Even if there is a hidden agenda taking the jab does not constitute an act of worship of the state. 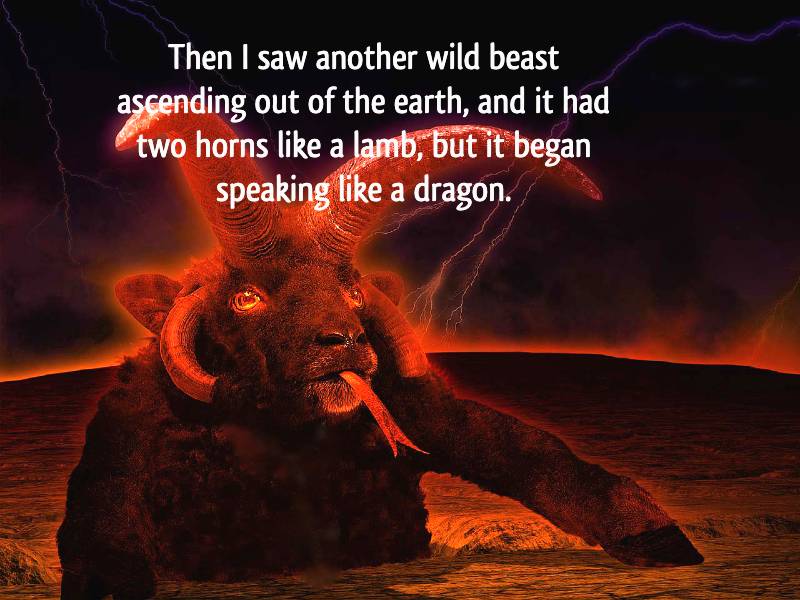 The dragon represents the Devil. So, the two-horned beast that will rise from the earth, as if from the grave, will be channeling Satan. What are the signs the resurrected beast will perform? No one knows. Calling down fire from heaven sounds like nuclear war. However, it may be something else.

I suspect the graphene neuroelectronics will be activated in the future when the beast speaks with the voice of the Devil.  Perhaps the graphene superconductors will be controlled remotely through our own devices or by 5G or a quantum supercomputer operating from satellites. There is technology in the works that has not been rolled out. For what purpose? The fact that such artificial humanoid technology exists cannot be coincidental. The graphene might come into play when the Frankenstein image comes to life and begins speaking. The nanochips may serve as tracking and mind-reading devices or even receptors for messages transmitted from the beast. I know, it sounds crazy. But who can deny the world has already gone mad?

As I have pointed out a few times already, exactly two years ago the Federal Reserve Bank began what is called an overnight repo operation. At first, it was just a few billion. It steadily grew. It was only supposed to last a month. It didn’t. By the end of 2019, the FED was pumping hundreds of billions per day into the banking system. Without a doubt, one or more too-big-to-fail banks failed. Right on cue, the pandemic began and a Tsunami of money was unleashed—trillions. The collapse of the global financial system was averted. Postponing the crash has provided a small window of opportunity to get everyone vaccinated. Then what?

The lockdowns have already destroyed many small businesses and created supply chain breakdowns. Nations around the world have become insolvent because of the phony emergency. They are on life support from the IMF and related institutions. At some point, the powers-that-be are going to crash the system and put the debtor nations into receivership. America is, by far, the most indebted nation. It will be the end of the nation-state system—the end of freedom and all the things people take for granted.

Even now we are being conditioned for greater and greater tyranny. In a post-crash world, with civilization in ruins, people will gladly accept any form of government—no matter how tyrannical. The euphemistic “great reset” will impose a banker’s dictatorship and most likely a communistic world government. The terrified masses will comply with any command to stay alive. That is when Satan will demand our worship. Perhaps then the graphene circuits in the brains of billions of people will be used to execute those who refuse to bow before the beast. I know—crazy.

It is worth noting that Jesus was betrayed by the son of destruction, just as Jehovah’s Witnesses have been sold out by the modern son of destruction—also known as the man of lawlessness. Maybe that is why the Watchtower has inexplicably ordered Jehovah’s Witnesses to get injected. Perhaps God has permitted Satan to implant a kill switch in the brains of His holy ones—assuming most will obey the Governing Body and stop being lovers of themselves and open to no agreement. After all, death is inevitable for the chosen ones. The opening of the fifth seal speaks of the holy ones who are about to be killed. That is why Jesus said: “I say to you, my friends, do not fear those who kill the body and after this are not able to do anything more. But I will show you whom to fear: Fear the One who after killing has authority to throw into Gehenna. Yes, I tell you, fear this One.” — Luke 12:4-5

The beautiful thing is, Jehovah is so powerful. We speak of God being a refuge but we do not really appreciate it—not yet. The secret place of the Most High will come into play then. Death will only magnify Jehovah’s salvation.

We are greatly blessed to know the truth about the overriding issues between Satan and Jehovah. We are rapidly arriving at the culmination. In His fairness God is going to allow the Devil to impose the most ruthless and tyrannical regime imaginable on a global scale in order to put “under compulsion all people—the small and the great, the rich and the poor, the free and the slaves—that these should be marked on their right hand or on their forehead, and that nobody can buy or sell except a person having the mark, the name of the wild beast or the number of its name.”

The Devil boasted that no one will really be true to God if they are threatened with death. That is why God is going to allow Satan to impose the death penalty on every person who refuses to worship him. God permitted the Devil to torture and kill Jesus. He is going to allow the beast to execute the remaining sons of the Kingdom in the near future because it will fulfill His grand purpose. The deaths of the holy ones will bring about their instantaneous transformation into immortal spirits. The first resurrection will then be complete. Then Christ and his 144,000-strong Kingdom will crush the Devil. “And Jehovah my God will come, and all the holy ones will be with him.” — Zechariah 14:5