Upon the Watchtower, O Jehovah, I am Standing

Upon the Watchtower, O Jehovah, I am Standing

The overthrow of tyrannical Babylon is the subject of the 21st chapter of Isaiah. God assured his prophet that the treacherous destroyer of nations and the persecutor of his people was going to be violently thrown down. The fall of ancient Babylon must have shocked the world back then.

History reveals that Babylon fell on one night without much of a fight. King Cyrus had somehow managed to temporarily dry up the Euphrates River, perhaps by opening floodgates upstream to divert the waters into flood detention ponds, sufficiently lowering the water level so that his army could wade across the river in the dead of the night. The prophet, though, does not see a vast army. From his watchtower vantage point the watchman sees only three war chariots – and ultimately a single war chariot with a span of steeds – reminiscent of the horsemen of the Apocalypse, led by the warrior Christ.

As far as the modern fulfillment of the fall of Babylon the Watchtower teaches that Babylon the Great of Revelation fell back in 1919. Their commentary on Isaiah states:

“What of Babylon the Great? By engineering the oppression of God’s people during World War I, she effectively held them in exile for a time. Their preaching work was virtually brought to a halt. The president and other prominent officers of the Watch Tower Society were imprisoned on false charges. But 1919 saw an astounding reversal. The officers were released from prison, the headquarters office was reopened, and the preaching work was recommenced. Thus, Babylon the Great fell in that her hold over God’s people was broken. In Revelation, this fall is twice heralded by an angel using the words of the announcement at Isaiah 21:9.”

True enough, apparently a few clergymen schemed to use their political influence to bring government pressure to bear against the Watch Tower Society back then. And Rutherford and seven others were railroaded off to prison on trumped up charges. But is it not also the case that the confusion and uncertainty that enveloped the International Bible Students back then had more to do with the unexpected passing of their beloved Pastor Russell than anything the clergy may have done to bring down the Society? A sizable number of Bible Students simply refused to accept Joseph Rutherford as their new leader and to this day Bible Student splinter groups continue to follow the dead Pastor. That schism, more than anything else, is what resulted in the preaching work momentarily coming to a stand still.

Not only the falling away of a large percentage of persons associated with the Watch Tower, but the very fact that the Bible Students had been riveted on 1914 and the climatic campaign that came with the release of the Photo Drama of Creation in that year as well, virtually insured that there would be a great let down in the years following. To lay it all off on the clergy as if they had taken the Bible Students captive is not an honest presentation of the facts.

Also, the Watchtower’s reasoning is faulty as regards Babylon’s fall supposedly being evidenced by false religion no longer having any hold over true Christians now. Back when Babylon was overthrown it was not just the Jews, God’s people then, who benefited. The Babylonian Empire ceased from persecuting all the nations. Yet, how could it be said that religion has lost its power over the nations since 1919?

And besides, Jehovah’s Witnesses have suffered much persecution from religionists since 1919. For example, the recent banning of Jehovah’s Witnesses in Moscow was surely brought about by the influence of the Russian Orthodox Church. Is it really honest to claim that the clergy have no hold over the work of Christians when the facts show that in some parts of the world they still exert a powerful restraint? If false religion no longer has any power to restrain the preaching of Jehovah’s Witnesses why is it that the Watchtower’s “world-wide-work” is greatly restricted, if not totally prohibited, in countries dominated by Islam? It seems that the myth-makers brush these inconvenient facts aside.

Perhaps the most inconvenient facts are the contradictions inherent in the Watchtower’s convoluted interpretation of Revelation. According to the Society the scarlet beast that ascends from the abyss with the harlot as its mount did so in 1945 when the United Nations came into existence. That being the case, that means that Babylon the Great fell from power more then two decades before it rides the beast out of the abyss! But according to the context of the 17th and 18th chapters of Revelation, it is after the eighth king comes to power that the angel declares that Babylon the great has fallen and commands God’s people to “get out of her.”

Concurrent with the fall of Babylon the Great and the announcement to “get out of her,” the angel says that her sins have amassed clear up to heaven and that Jehovah has called her many sins to mind. The angel further relates that her judgment comes in one hour. But if the world empire fell in 1919 because her sins had massed clear up to heaven, why has her hour of judgment not followed? Why the delay?

Returning to the prophecy of Isaiah, by its very name the Watchtower implies it is the only source of reliable interpretation of prophecy and that all anointed Christians make up a so-called “watchman class.” However, as regards the biblical watchman, he is used by God to keep watch for what is coming. That stands in stark contrast to the Watchtower’s watchmen who do not really announce what is coming, but rather, the Watchtower Society uses prophecy to focus attention on what is already past.

But if the Watchtower were really fulfilling the pattern set by Isaiah in calling out what it sees as regards the fall of Babylon, shouldn’t we expect that Watchtower to have foreseen beforehand what was going to happen during World War One and its aftermath?  True, over the course of the decades since then the Watchtower has skillfully patched together a credible explanation that has convinced millions of Jehovah’s Witnesses that virtually all prophecy has been fulfilled already, but is that really the work of a watchman?

In truth, the prophecy of Isaiah is foretelling the coming fall of both the eighth king and his religious consort. That is in keeping with the fact that the original Babylon was both God’s imperial executioner and the promoter of false religion and idolatry. It is this last kingdom that is destined to thresh Jehovah’s people, for which God will then require an accounting from them.

The UK seems to be locked in a race with the US to see which nation can destroy itself first. It is going to be close. Might be a dead heat

Highest daily case count since May 1 with 6,178 coronavirus cases on Wednesday.

California has always been known as the land of fruits and nuts --and not the kind you eat, but this is taking nuttiness to a new level.

CA Gov. Newsom Announces Ban On All Gas-Powered Cars By 2035

Too bad the WT has ordered JW's not to recommend natural remedies. Instead of sheltering in place and all of that mask nonsense better to pop some D caps via @FuturityNews

In a new study, people with an untreated vitamin D deficiency were almost twice as likely to test positive for COVID-19 as people without a deficiency...

It takes a lot of work to destroy a great nation, but it looks like they are getting it done. 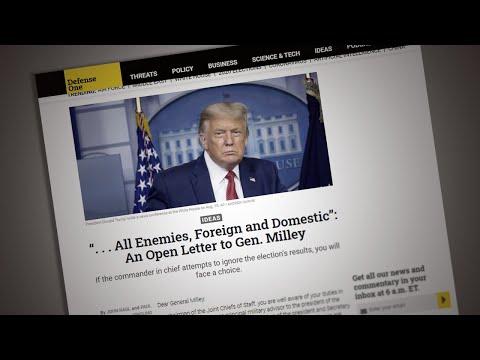 A Stark Warning of an Impending Coup; Track and Arrest the