Throw the evil slave out!

Throw the evil slave out!

In the four illustrations recorded at Matthew 24:45 to 25:46, Jesus highlights traits that would distinguish his true followers in these last days. In the illustration involving the faithful slave, Jesus highlights the need for the small group of anointed ones entrusted with feeding his domestics during the last days to be faithful and discreet. In the parable of the virgins, Jesus stresses that all his anointed followers would need to be prepared and to be vigilant, knowing that Jesus is coming but not knowing the day or the hour. In the parable of the talents, Jesus shows that the anointed would need to be diligent in carrying out their Christian responsibilities. Jesus directs the final illustration, the parable of the sheep and the goats, to those with an earthly hope. He emphasizes that they would have to be loyal and give full support to Jesus’ anointed brothers on earth.

Jesus spoke of his coming and the judgment of the master’s appointed slaves on more than one occasion. He spoke the various illustrations mentioned in the Daily Text in the context of the conclusion of the system. However, in the 12th chapter of Luke Jesus spoke on the topic much more extensively, but the Watchtower very rarely directs readers to that discussion.

No doubt the reason for the neglect is because in the 12th chapter of Luke goes into more detail. For example, after illustrating the two outcomes for the faithful slave and the evil slave, Jesus went on to elaborate, saying: “Then that slave who understood the will of his master but did not get ready or do what he asked will be beaten with many strokes. But the one who did not understand and yet did things deserving of strokes will be beaten with few. Indeed, everyone to whom much was given, much will be demanded of him, and the one who was put in charge of much will have more than usual demanded of him.”

As Jesus had just spoken of two slaves —one faithful and one unfaithful —the slave that understood and the slave that did not understand —must also represent the evil and the faithful slave, respectively. 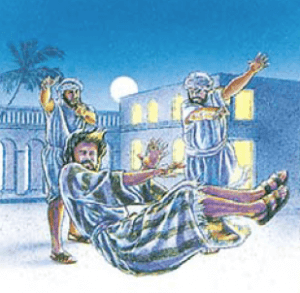 The basis for their judgment, then, is not whether or not they complied with the master’s will, because both slaves fell short in that regard. The master judges them, not strictly on their performance, but on their motive. The master is most concerned whether they deliberately, willfully disobeyed him in his absence, or if they were simply ignorant of what the master expected.

Essentially, what this means is that the master knows what they are thinking. He knows their hearts.

This is in perfect harmony with what Christ said to the congregation in Thyatira in regards to his determination to stamp out idolatry in the congregation: “So that all the congregations will know that I am the one who searches the innermost thoughts and hearts, and I will give to you individually according to your deeds.”

That the illustration speaks to the leadership of Jehovah’s Witnesses is undeniable since Jesus plainly revealed that the judgment to come pertains to the one who was put in charge.

So, the application is simple: The coming of Christ will initiate the judgment of the house of God. Obviously, on the top of the list of issues to be dealt with is the fact that the Watchtower has become the legal adversary of thousands of sexually abused children.

Apparently some men know their policies are evil and others are just ignorantly compliant out of misplaced loyalty to the organization. We cannot know who is more culpable and who is less. But Jesus knows.