Psalms #21 – Your right hand will find those hating you

Psalms #21 – Your right hand will find those hating you

David’s ascension to kingship was a long and trialsome affair. He was first anointed by Samuel when he was a mere teenager. Jehovah’s spirit came upon him and moved him to go out onto the battlefield against the Philistine hulk named Goliath armed only with a slingshot. After he gained national prominence he was persecuted by king Saul and was forced to live as a fugitive for some time. Through it all though, God protected David, and eventually, he was crowned king—first over Judah and finally over all of Israel.

David could rightly say: “For you meet him with rich blessings; you place a crown of fine gold on his head. He asked you for life, and you gave it to him, a long life, forever and ever.” — Psalms 21:3-4

It is interesting that David speaks in the third person. That is because he was really speaking about Christ being given the Kingdom. Obviously, David was not rewarded with everlasting life. After Jesus’ disciples were anointed on Pentecost Peter explained to the Jews that David’s tomb was among them to that day. It was Jesus whom Jehovah did not leave in the Grave. The greater David was given, not just a long life or even everlasting life, but an indestructible life—immortality!

As an immortal king, Jesus will search out and eliminate all of those who hate Jehovah—no matter where they are. “Your hand will find all your enemies; your right hand will find those hating you. You will make them like a fiery furnace at the appointed time when you give them attention. Jehovah will swallow them up in his anger, and fire will consume them.” 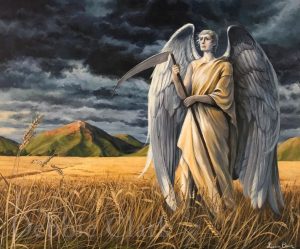 According to an illustration Jesus spoke, the appointed time for judgment is like a harvest. And the harvest is a conclusion of the system, otherwise known as the time of the end. During the time of the end, the angels will be dispatched to uproot and remove all the weeds from among the wheat and all stumbling blocks out of his Kingdom. Jesus explained that the weeds are persons planted by the Devil who coexist among the true seed planted by God. The bundles of weeds will then be pitched into the fiery furnace and consumed. 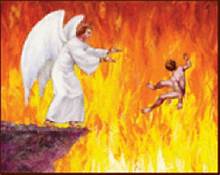 One of the most blatant lies fabricated by the Watchtower is that the harvest has already taken place. Jehovah’s Witnesses are required to believe that the angels removed hundreds of millions of churchgoers out from among a few thousand Bible Students in 1918-19 and pitched them into the fiery furnace. It is every bit as absurd and nonsensical as Christendom’s hellfire myth but the Watchtower must teach it and assert it to be true because to do otherwise would be an admission that the time of the end did not begin in 1914.

The fact that men who claim to be faithful and discreet and keepers of the Watchtower bastion of truth would allow themselves to be deluded by such fallacious reasoning is itself evidence of the presence of Satan’s seed. As regards the demon seed, it is as David foretold: “For they intended to do what is bad against you; they have devised schemes that will not succeed.”

Not only have Jehovah’s Witnesses been deluded into accepting a false parousia but the schemers against Jehovah have hatched a plot to have everyone under their influence injected with a toxic potion that does not provide even a modicum of protection against Covid and may have serious and deadly side effects. The rationale for promoting this scheme is that the World Health Organization strongly recommends it. Although the UN has no authority over the citizens of sovereign nations the Governing Body asserts that they do, that we must obey Caesar and allow ourselves to be injected with the mystery elixir.

Surely Jehovah has many enemies among Jehovah’s Witnesses, especially within the leadership. When Christ is crowned and goes forth as a warrior armed

with his bow and arrows he is certain to war against them: “For you will make them retreat by aiming your bow at them. Rise up, O Jehovah, in your strength. We will sing praises to your mightiness.” — Psalms 21:12-13