The Things that Must Shortly Take Place

The Things that Must Shortly Take Place

Jehovah is a worker who takes pleasure in what he does.  To allow his intelligent creatures to experience a similar joyful and gratifying feeling of accomplishment, Jehovah has assigned them pleasant and satisfying work. For example, he involved his firstborn Son in His creative work.  During his prehuman existence, Jesus was beside God in heaven “as a master worker.” From beginning to end, the Bible contains examples showing that Jehovah has always assigned work to his spirit sons. After Adam and Eve sinned and were ejected from their Paradise home, God “posted at the east of the garden of Eden the cherubs and the flaming blade of a sword that was turning continuously to guard the way to the tree of life.”  And Revelation 22:6 reveals that Jehovah “sent his angel to show his slaves the things that must shortly take place.”

In reality Jehovah’s Witnesses do not believe that Revelation any longer reveals the “things that must shortly take place.” That’s because the Watchtower has proclaimed that virtually all things have already taken place. 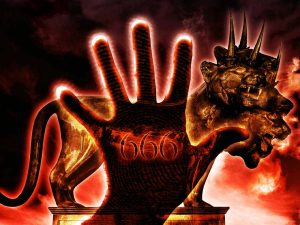 The seven seals have been opened. The four horsemen have come forth. The seven angels have blown their trumpets and the seven bowls of God’s wrath have been poured out. The Devil and all of his demons have been cast down. The head of the wild beast has been struck with a mortal wound and revived. The two-horned beast has risen from the earth and commanded that an image of the seven-headed beast be made. The holy ones have been conquered. The two witnesses have both been killed and brought back to life and taken to heaven. The eighth king has been ruling for his allotted one-hour. Mankind has been coerced into worshipping the beast. Multitudes have received the mark of the beast —the 666 mark of doom. The locusts have been released from the abyss and are stinging the men who do not have the seal of God. The sacred secret of God has come to a grand and glorious conclusion.

To be sure, Revelation’s grand climax is, well, anticlimactic.

Jehovah’s Witnesses believe that God exclusively speaks through the Watchtower. Although unspoken, it is the belief of millions of witnesses that there is no truth that does not emanate from Bethel or that is not first sanctioned by the Governing Body. The axiom is, God only uses individuals who are in good standing with the organization. To bolster that view the Watchtower does not recognize any stand alone individual. All anointed Christians supposedly make up a collective “prophet.” That is why the Watchtower has taken to itself such designations as the “Jeremiah class” and the “Ezekiel class,” etc. Hence, there is no place for any individual to speak a message, no matter its validity.

And yet the simple truth is, God has always used individuals.

Some, such as Noah and Abraham, lived prior to God’s organizing a nation. But there are many examples of individuals within the nation of Israel who were employed by God to accomplish a particular thing. Gideon comes to mind. David too. Also, all of the prophets.

In the first century congregation there was the prophet, Agabus, who foretold Paul’s destiny.

In modern times individuals have changed the course of history. John Wycliffe and William Tyndall are notable. At great personal cost they defied the law and pioneered the first translations of the Bible into English. And of course, most recently Charles Taze Russell was an individual who had a far-reaching impact that reverberates to this day.

My work has been similar to Jeremiah’s assignment, which was to tear down and uproot; to plant and to build. I have torn down the Watchtower’s long-embedded error of the invisible parousia —uprooted the 1914 doctrine, revealing it as a delusion promoted by a man of lawlessness.

Conversely, I have planted a seed and built-up an expectation of a future coming of Christ —indeed, a visible manifestation; a revelation, an unveiling of all that is concealed.