QUESTION: Whats your take on the new June 2016 WT, page 16, Question from Readers: “Whom do the man with the secretary’s inkhorn and the six men with smashing weapons described in Ezekiel’s vision symbolize?”

ANSWER: The Watchtower’s recent “adjustment” is correct. The man with the inkhorn and the six men with smashing weapons symbolize the angels who are involved in both saving the righteous and executing the wicked. And as they correctly note, the actual destruction of Jerusalem was carried out by Babylon.

But the Watchtower’s relatively trivial “adjustment” does not bring things into proper focus. According to the article apostate Jerusalem represents Christendom and the world at large that will be destroyed at Armageddon. That is simply not the case. For example, why ought Jehovah’s people sigh and groan over the detestable things taking place in Christendom? There are a lot of people who are disheartened and disgusted by religion, but does that endear them to God or qualify them to be marked for salvation? Obviously not.

If we take the entire prophecy into consideration it unquestionably points to the judgment of the house of God —not Christendom. That is evident from the fact that Jehovah caused Ezekiel to see in vision all the evil things that were being done within the temple of Jehovah in Jerusalem. That city, and especially the temple, was the place where Jehovah caused his name to reside.

Although Ezekiel was not a priest within the temple —he being an exile in Babylon at the time —Jehovah picked him up by a tuft of his hair and carried him away by the spirt, boring through the temple walls to see the disgusting things being done by the priests of Jehovah. So, the wickedness was not overt. It was subtle —concealed within the walls of the sanctuary.

As Jehovah’s Witnesses well know, the Scriptures establish an order for the judgment to come. The apostle explained: “For it is the appointed time for the judgment to start with the house of God. Now if it starts first with us, what will the outcome be for those who are not obedient to the good news of God?” —1 Peter 4:17

The prophecy of the secretary’s inkhorn confirms that ordering, as the six symbolic destroyers were commanded to “‘start from my sanctuary.’ So they started with the elders who were in front of the house. Then he said to them: ‘Defile the house and fill the courtyards with the slain. Go!”’

Keep in mind that the destruction of “Jerusalem” is also the central feature of Jesus’ detailed prophecy concerning the conclusion of the system of things and his parousia. Christ indicated that his followers would have to take decisive, life-saving action when they saw the disgusting thing standing in a holy place.

According to the prophet Daniel, who was also an exile in Babylon along with Ezekiel, the sanctuary of the Prince of princes along with the constant feature of Jehovah’s temple worship were going to be thrown down by the last king. In fact, the angel identified the holy place that is destined for desolation during the time of the end, when he said: “How long will the vision of the constant feature and of the transgression causing desolation continue, to make both the holy place and the army things to trample on?”

Obviously, the transgression is not on the part of the fierce-looking king who brings desolation, but on the part of the “priests” within the sanctuary. And Christ undoubtedly had this passage in Daniel in mind when he said: “Therefore, when you catch sight of the disgusting thing that causes desolation, as spoken about by Daniel the prophet, standing in a holy place (let the reader use discernment)…”

The apostle Paul also revealed that an imposter would assume control over God’s temple, an evil entity whom Paul identified as a man of lawlessness. Prior to his taking to himself the seat of God, though, the man of lawlessness promotes a fake parousia. That is why Paul warned the brothers not to be alarmed or shaken from their reason if they hear or read authoritative proclamations – even if purported to be messages from the apostles themselves – declaring that the presence has begun and the day of Jehovah is here. Paul explicitly stated that the day of Jehovah would not come until the apostasy comes first and the man of lawlessness, otherwise known as the Judas-like son of destruction, is revealed.

And “the mystery of this lawlessness” is detectable in many ways, such as the glorification of the Watchtower itself and the Governing Body in particular, which amounts to idolatry; the Watchtower’s NGO partnership with the United Nations and their disgusting hypocrisy in proclaiming their abhorrence of child abuse while running cover for pedophiles and crushing their victims, and even the bizarre appearance of demonic subliminal images in Watchtower literature, is a telltale hint of the existence of a satanic presence, which after all, is the source of the authority of the man of lawlessness, even as Paul said: “But the lawless one’s presence is by the operation of Satan with every powerful work and lying signs and wonders and every unrighteous deception…”

But the foretold apostasy is yet to come. Quite likely the lawless faction within the Watchtower will ally itself with the new world order after the coming crash of the system. That will be an expression of the disgusting thing standing where it ought not —in the place of Christ.

In harmony with what the apostle wrote about the lawless one being revealed in connection with the presence, or manifestation of Christ, Ezekiel’s vision of the temple and the destroyers is predicated upon the interaction of Ezekiel with a manifestation of a glorious being, whom the awestruck prophet described this way: “As I watched, I saw a form similar to the appearance of fire; there was fire below what appeared to be his waist, and from his waist upward his appearance was bright, like the glow of electrum.” 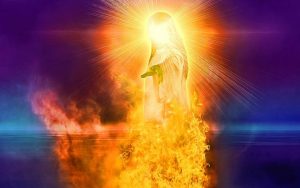 Oftentimes angels materialized as men —such as when two “men” in white garments appeared among the disciples who were looking upon Christ as he ascended to heaven. The question that ought to be considered is what is the significance of the appearance of a glorious superhuman, an experience which Daniel also had —as well as the apostle John in Revelation? In the apostle’s experience the effulgent figure is definitely identified as Jesus Christ. That being true, Ezekiel’s interaction with a dazzling man of fire, as well as his re-occurring interaction with the awe-inspiring fiery chariot and its enthroned rider, signify that the visions he experienced are to find their ultimate realization during the glorious, visible presence of Christ. 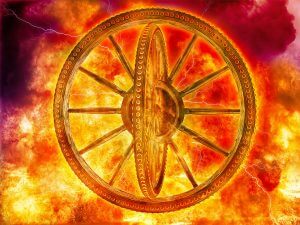 In the 10th chapter of Ezekiel the celestial chariot appears to Jehovah’s watchman once again. This time, though, the focus is on the wheelwork. He wrote: “As I was watching, I saw above the expanse that was over the heads of the cherubs something like a sapphire stone appearing above them, and its appearance resembled a throne. Then he said to the man clothed in linen: ‘Enter between the wheelwork, under the cherubs, and fill both your hands with burning coals from between the cherubs and toss them over the city.’ So he entered as I watched. The cherubs were standing to the right of the house when the man entered, and the cloud filled the inner courtyard. And the glory of Jehovah rose up from the cherubs to the threshold of the doorway of the house, and the house gradually became filled with the cloud, and the courtyard was full of the brightness of the glory of Jehovah. And the sound of the wings of the cherubs could be heard in the outer courtyard, like the sound of God Almighty when he speaks. Then he commanded the man clothed in linen: ‘Take fire from between the wheelwork, from between the cherubs,” and he entered and stood beside the wheel. Then one of the cherubs stretched his hand out toward the fire that was between the cherubs. He took some and put it into both hands of the one clothed in linen, who now took it and went out. The cherubs had what looked like the form of human hands under their wings.”

There is an interesting parallel to Ezekiel’s vision found in the 8th chapter of Revelation. Immediately after the opening of the seventh seal John saw: “Another angel, holding a golden incense vessel, arrived and stood at the altar, and a large quantity of incense was given him to offer it with the prayers of all the holy ones on the golden altar that was before the throne. The smoke of the incense from the hand of the angel ascended with the prayers of the holy ones before God. But right away the angel took the incense vessel, and he filled it with some of the fire of the altar and hurled it to the earth. And there were thunders and voices and flashes of  lightning and an earthquake. And the seven angels with the seven trumpets prepared to blow them.”

What does the fire the angel throws down upon the earth represent? It symbolizes the destruction of God’s earthly organization. That is what is represented by the woes associated with the first four trumpet blasts, which have been considered in detail in the chapter of Revelation in Jehovah Himself Has Become King.