The Mountain of the House of Jehovah

The Mountain of the House of Jehovah

The Watchtower is commonly accused of being a false prophet because of several failed predictions and raised expectations related to specific years, such as 1914 and 1925 and more recently 1975. In actuality, though, only a very small percentage of the Watchtower Society’s eschatology has to do with the things to come. That is because Jehovah’s Witnesses have been led to believe that nearly all prophecy related to the coming of Christ has been fulfilled already. The common expectation among Jehovah’s Witnesses is that the only significant aspect of prophecy yet to unfold is the destruction of the symbolic harlot of Revelation.

The point is, for the most part the teachings accepted by Jehovah’s Witnesses as the reliable interpretation of prophecy are focused on past events. For the very reason that the Watchtower’s interpretations do not involve things that have not transpired it is a relatively simple matter to determine whether or not the things purported to be the fulfillment of prophecy actually are.
.
Now consider Isaiah 2:2-4: “And it must occur in the final part of the days that the mountain of the house of Jehovah will become firmly established above the top of the mountains, and it will certainly be lifted up above the hills; and to it all the nations must stream. And many peoples will certainly go and say: ‘Come, you people, and let us go up to the mountain of Jehovah, to the house of the God of Jacob; and he will instruct us about his ways, and we will walk in his paths.’ For out of Zion law will go forth, and the word of Jehovah out of Jerusalem. And he will certainly render judgment among the nations and set matters straight respecting many peoples. And they will have to beat their swords into plowshares and their spears into pruning shears. Nation will not lift up sword against nation, neither will they learn war anymore.”
.

Jehovah’s Witnesses realize that the mountain of the house of Jehovah is not any literal, earthly temple located on the ancient hills of Jerusalem. The Christian writers make it clear that Zion represents God’s heavenly kingdom. For example, in his letter to the Hebrews Paul used the expression “heavenly Jerusalem.” And, of course, Revelation depicts Christ and his fellow 144,000 world-conquerors standing upon Mount Zion, which symbolizes the completed heavenly kingdom of God. It is evident that the prophecy of Isaiah relates to the establishment of the kingdom of God “in the final part of the days.”

The Watchtower persuasively teaches that the prophetically designated period variously termed “the final part of the days” and “the time of the end” commenced nearly a century ago. Supposedly God has rendered judgment and set matters straight already and this is believed to be primarily evident by the refusal of Jehovah’s Witnesses to do military service and their organizational unity. Moreover, the Watchtower Society is believed to be the agency that has accomplished the fulfillment of the prophecy by its sponsorship of a worldwide preaching and teaching work that supposedly has elevated the worship of Jehovah above all other competing forms of worship.

To illustrate the point, on page 44 of the first volume of the Society’s Isaiah’s Prophecy commentary, paragraph 20, it states that God’s law and instructions, which issue out of heavenly Zion, is taught to Jehovah’s Witnesses in all nations via the “Bible-based publications” of the Watchtower Society. But Jehovah’s Witnesses are here encouraged to consider the facts.

To buttress their assertion on page 42 the Watchtower repeats a well-worn falsehood, stating:

“Christ Jesus referred to “a conclusion of a system of things” as a time of harvest when the angels would gather in “the sons of the kingdom”—those with the hope of ruling with Jesus in heavenly glory. Since 1919, Jehovah has empowered “the remaining ones” of these sons to share with the angels in the harvest work. Thus, to start with, “the sons of the kingdom,” Jesus’ anointed brothers, are the ones gathered. Then they share in a further gathering work. During this time of harvest, Jehovah has progressively helped the anointed remnant to understand and apply his Word, the Bible. This too has contributed to the elevating of pure worship. Though ‘darkness itself covers the earth, and thick gloom the national groups,’ the anointed are “shining as illuminators” among humankind, having been cleansed and refined by Jehovah.”

As Jesus stated in the 13th chapter of Matthew, the harvest is a conclusion of the system of things. However, nowhere in that particular illustration did Jesus state that Christian ministers have any share in the harvest that occurs during the conclusion of the system. (Jesus did liken the entire Christian ministry to a harvest when he said ‘the harvest is great but the workers are few…’) On the contrary, Jesus said the angels are to be dispatched to accomplish the harvest by first uprooting the weeds and then harvesting the sons of the kingdom. Moreover, reasonably, the concluding harvest is not carried out over many decades as the Watchtower implies. Just as a literal harvest takes place over a short period of time at the end of the growing season, the final harvest of the sons of the kingdom must likewise take place over a relatively short period of time, at which time the sons of the kingdom will shine as brightly as the sun in the kingdom of their Father.

Furthermore, Jesus indicated in his explanation of the harvest illustration that prior to the gathering of the wheat the angels will remove every person doing lawlessness and every cause for stumbling out from his kingdom. Conversely, that means prior to the harvest Christ’s congregation will be menaced by persons doing lawlessness and marred by numerous stumbling blocks. The removal of such evils will be swift, decisive and permanent. Now the question: Since the Watchtower Society asserts that it is the manifestation of Christ’s congregation why is the organization of Jehovah’s Witnesses still plagued with persons doing lawlessness and littered with innumerable stumbling blocks?

As an example of a cause for stumbling that emanated directly from the leadership of the organization, as mentioned at the onset of this article, in the decade leading up to 1975 Bethel and many of its appointed traveling representatives vigorously promoted the notion that 1975 would mark the end of 6,000 years of human history and that very likely by that year or shortly thereafter the 1,000-year reign of Christ would commence, precluded by the world-ending war of Armageddon. In the years following that uneventful year untold numbers of disillusioned Jehovah’s Witnesses stumbled out of the organization.

More recently similar numbers of Jehovah’s Witnesses and interested persons have been stumbled by the exposure of the Watchtower Society’s secret 10-year partnership with the United Nations (See the chapter: Strange Bedfellows, also available as a brochure) and the child abuse scandal that has rocked the organization; as well as the debacle over Bethel’s latest redefinition of what constitutes the generation that will not pass away before all the things foretold occur.

While the leadership of the Society may steadfastly deny any responsibility for such doings and the vast majority of Jehovah’s Witnesses may similarly dismiss such things as the accusations of “opposers” and apostates, still, the unavoidable truth is, the aforementioned causes for stumbling exist. And since that is undeniably the case, therefore, it is evident that no such harvest has taken place yet. That means that the conclusion of the system and the final part of the days have not begun. (See the article: The Final Part of the Days)

Bluntly, the Watchtower’s 1914-parousia doctrine is a fraud. The invisible parousia hoax is perpetuated by the very “dictators of Sodom” whom the prophecy denounces. The fraudulent nature of the Watchtower’s prophetic interpretation is evident in the context of Isaiah itself; namely, that Zion’s mountain is lifted up in the aftermath of the destruction of that which is symbolized by Jerusalem. During the tumult of the tribulation is when the foretold ingathering takes place.

On page 43 the Watchtower cites the prophecy of Haggai.

The prophet Haggai foretold the appearance of this great crowd. He wrote: “This is what Jehovah of armies has said, ‘Yet once—it is a little while—and I am rocking the heavens and the earth and the sea and the dry ground. And I will rock all the nations, and the desirable things of all the nations [those who join anointed Christians in pure worship] must come in; and I will fill this house with glory,’ Jehovah of armies has said.”

Just as there is no evidence that the angels have already initiated the harvest, neither is there any substance to the Watchtower’s assertion that the nations are being rocked at this present time. Perhaps one could make the case that the two world wars rocked the nations, but it has been almost a century since the First World War began and now 65-years since the end of World War Two. Besides, the influx of millions of persons becoming Jehovah’s Witnesses has taken place in more recent decades, during a period of relative global stability.  Are Jehovah’s Witnesses so unreasoning so as to believe that the fear-inspiring rocking of heaven and earth is now taking place? Such a notion is laughable. 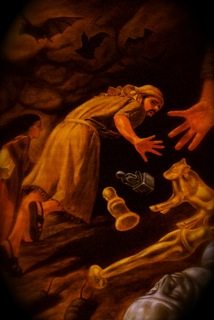 Notice the expression that occurs twice in the passage above: “when he rises up for the earth to suffer shocks.” Surely, the prophecy of Isaiah parallels what is foretold in Haggai, which means the rocking of the nations is the great day of Jehovah and the great tribulation, which means the harvest ingathering is not accomplished by the worldwide work of Jehovah’s Witnesses under the direction of the Watchtower Society. The mountain of the house of Jehovah will be lifted up even as the nations of the world will be laid low. Also, it occurs after the destruction of the earthly Jerusalem. What is the earthly Jerusalem? That will be considered in the next article.

British-aligned media still at it, intent on to preventing cooperation among nations

The American people are suffering an obvious campaign to divide them and encourage them to believe false conspiracy theories about the coronavirus pan...

How exactly does one prepare for the collapse of civilization? Stock up on toilet paper? Kremlin spokesman calls for getting prepared for global economic crisis

Coordinating anti-crisis measures by many states will be needed to overcome the developing economic crisis triggered among other things by the coronav...

Why today's WH briefing was disturbing: presidential misinformation from the podium; dangerous and unconfirmed claims about hydroxychloroquine; gratuitous shots at rival politicians.

A growing scene for those who venture out into the streets of Manhattan these days is boarded up storefronts.

Things will never be back to business-as-usual

This is what an economic collapse looks like, and it is just getting started...

Meanwhile, as the pandemic has everyone distracted, behind the curtain the Federal Reserve bank is bailing out the central banks around the world in an effort to keep the 1.8 quadrillion $$$ derivatives bubble from exploding https://larouchepub.com/pr/2020/20200401_bailout.html

More than 10,000 people have now died in Spain after contracting coronavirus, with a record 950 of them dying on Wednesday...

This is a little disconcerting.

Bill Gates recently stated on Reddit that "digital certificates" will be used to identify who received the upcoming COVID-19 vaccine. And these certif...