The Lawless One’s Presence Is by the Operation of Satan

The Lawless One’s Presence Is by the Operation of Satan

Holy spirit has appointed you overseers, to shepherd the congregation of God.—Acts 20:28.

It is important that we show appreciation for God’s arrangement for shepherding his flock. Christian elders are a provision from Jehovah, who always acts in our best interests. The elders are “like a hiding place from the wind, a place of concealment from the rainstorm, like streams of water in a waterless land, like the shadow of a massive crag in a parched land.” How we appreciate a shelter from a strong wind or from a chilling rainstorm! When the hot sun is beating down on us, we are grateful for the shade provided by a crag. These figures of speech help us to see that the elders provide needed spiritual help and refreshment. By obeying those taking the lead among us, we show how much we appreciate these “gifts in men” and give evidence of our love for God and for Christ, the Head of the congregation.

The reason for the paradox is because Jehovah, the God of truth, has allowed Satan, the father of the lie, to wield his influence over those who have been entrusted with the truth. He does so for a very good reason.

The Devil is much more powerful, cunning, crafty and subtle than you realize. His intent is to convince the truth-bearers that he has no influence over them. He has been wildly successful in that regard. To that end no doubt the demons’ subtle influence is reflected in the notion that the Watchtower Society is a spiritual paradise; a protective bubble that the Devil cannot penetrate. All evil is on the outside of Jehovah’s earthly ark of salvation.

As the context of Paul’s prophecy reveals, Satan’s operation involves falsely announcing that the parousia has began and that the day of Jehovah is here. From the moment the Watchtower was formed the deluding influence was already in operation —heralding 1874 as the beginning of the presence of Christ and pointing forward to 1914 as the day of Jehovah. 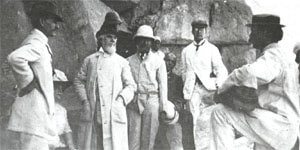 And Lo and Behold! According to the inch-years divined from the secret galleries of the ancient witness set in stone, the Great Egyptian pyramid of Giza, and secondarily confirmed by biblical chronology, wonder of wonders, the sign appeared right on cue. The outbreak of the Great War convinced the Bible Students that Russell’s  pyramidology was true. The horrific Spanish Flu pandemic —more deadly than the war itself —only confirmed the esoteric calculations promoted by the Watchtower.

Of course, over the past century the Watchtower’s 1914 doctrine has required continual maintenance to keep it credible. And that is where the Daily Text comes in. Through the use of snippets of scripture and a paragraph from a Watchtower Jehovah’s Witnesses are regularly subjected to Satan’s deluding influence, which unbeknownst to  them promotes “every unrighteous deception,” foremost of which is the lie that Jesus has already begun ruling and that the Watchtower is the refuge from the storm that Jehovah has lovingly provided.

Take today’s text, for example. Has the holy spirit appointed overseers to their positions? Sure. But does that mean that all appointees are true? Not necessarily. Consider Christ, who, after spending the entire night in prayer no doubt seeking his heavenly Father’s direction, selected his twelve apostles —one of whom was Judas Iscariot, whom Jesus called “the son of destruction.” Not coincidently, the man of lawlessness, whom Satan legitimizes by performing lying signs and powerful works, etc., is also called “the son of destruction.”

Now consider the text’s reference to Isaiah 32:1-2, which reads: “Look! A king will reign for righteousness, and princes will rule for justice. And each one will be like a hiding place from the wind, a place of concealment from the rainstorm, like streams of water in a waterless land, like the shadow of a massive crag in a parched land.”

Question: Are Christian elders the princes who rule for justice? Absolutely not. Although Isaiah has been divided into 66 chapters and verses, like all other Bible books and letters, we should not lose sight of the fact that it was/is a single book of prophecy. Thus, the “rainstorm” has a specific meaning. It is not just hardship and persecution in a general sense. It has to do with the coming storm unleashed by Satan after he is cast down.

For example, Isaiah 25:4-5 uses the same symbolism with reference to the persecution of the tyrannical nations who oppress God’s people, and whom Jehovah ultimately annihilates: “For you have become a stronghold to the lowly, a stronghold to the poor in his distress, a refuge from the rainstorm, and a shade from the heat. When the blast of the tyrants is like a rainstorm against a wall, as the heat in a parched land, you subdue the uproar of strangers. Like heat is subdued by the shadow of a cloud, so the song of the tyrants is silenced.”

The rainstorm, then, is associated with Jacob’s time of distress. The coming storm will also sweep away the Watchtower’s 1914 pact with Death. The 28th chapter of Isaiah foretells: “And I will make justice the measuring line and righteousness the leveling tool. The hail will sweep away the refuge of lies, and the waters will flood out the hiding place. Your covenant with Death will be dissolved, and your agreement with the Grave will not stand. When the raging flash flood passes through, you will be crushed by it. As often as it passes through, it will sweep you away; for it will pass through morning after morning, during the day and during the night.”

Please notice that Jehovah’s justice and righteousness is the driving force behind the raging flashflood. And the verse immediately preceding indicates that the flood coincides with the establishment of Christ’s Kingdom. And that is exactly what Isaiah 32 is about. The king who will reign for righteousness is Jesus. And the princes who will reign for justice are not elders, but the chosen ones who receive a kingdom with Christ. They will be the place of refuge. Why are Jehovah’s Witnesses unable to comprehend this? The next verse explains:

“Then the eyes of those seeing will no longer be pasted shut, and the ears of those hearing will pay attention. The heart of those who are impetuous will ponder over knowledge, and the stammering tongue will speak fluently and clearly. The senseless one will no longer be called generous, and the unprincipled man will not be called noble; for the senseless one will speak nonsense, and his heart will devise harmful things, to promote apostasy and to speak what is wayward against Jehovah, to cause the hungry one to go unfed and to deprive the thirsty one of something to drink.”

The coming global war will be an eye-opening experience, for sure. Then, the nonsense that now passes for sacred truth will be seen by many for what it is —nonsense. The Devil’s intent is to convince Jehovah’s Witnesses that there is nothing more to expect other than what they have been led to expect —that the Watchtower will be their guide all the way to the gates of the new world, in order to cause the hungry to go unfed by keeping them fettered to the organization that will go into full blown apostasy by opposing Christ at his coming, even as Paul wrote concerning the man of lawlessness who comes to the fore and leads many into apostasy immediately before the manifestation of Christ brings him to nothing.

Until then the man of lawlessness is sure to receive the praise of Jehovah’s Witnesses for having generously provided them with nothing but the finest spiritual food available.