The Idolization of ‘Jehovah’s Visible Organization’

The Idolization of ‘Jehovah’s Visible Organization’

(From 2004 – slightly revised) The issue of worship dates back to the Garden of Eden; when Adam and Eve were originally presented with a convenient alternative to the exclusive worship of Jehovah God. Since that time Satan the Devil has continually tempted Jehovah’s people with countless diversions in an effort to subvert or pervert our worship. His most insidious efforts by far, though, seem to be the subtle exaltation and self-glorification of God’s own organization and spokesmen.

We might recall the occasion in the Bible when, after many years of humble leadership, Moses rashly declared himself to be the miraculous provider of water for the Israelites. This angry and immodest boast, from the man that Jehovah himself described as the meekest of all men, tragically cost him the privilege of entering the Promised Land.

In the knowledge that Satan is ever on the alert to insinuate himself into our midst through deception, it seems particularly timely, to call attention to a somewhat rash and immodest statement recently made by the Watchtower. In the July 2003 edition of Our Kingdom Ministry there is an article entitled: “New Circuit Assembly Program.” The article gives a brief overview of the upcoming 2004 assembly program. In conclusion the last paragraph says:

“Jehovah himself has prepared this banquet of spiritual food. Come! Eat! We will cry out joyfully if we are present to benefit from the entire program.”

Obviously, most of Jehovah’s Witnesses would not find the above statement to be at all offensive towards God. Indeed, on the surface it appears as a positive statement merely intended to give credit to God. But, we might ask in what way “Jehovah himself has prepared” a supposed “banquet of spiritual food”? How exactly did Jehovah go about preparing the program for the 2004 circuit assembly? Was it by inspiration? If Jehovah himself prepared the Watchtower’s assembly program does that mean it is error-free? The truth is that the Watchtower produced the program outline and format and various brothers and sisters with assembly assignments have rehearsed the script to be presented.

The article, of course, doesn’t specify just how Jehovah himself may have prepared the assembly program. Each of Jehovah’s Witnesses is left to draw their own conclusion. But the impression we are inevitably left with is that everything the Watchtower publishes is from the very mouth of God. That ought to be somewhat unsettling.

Granted, in his absence Christ appointed certain of his slaves to provide his household with spiritual food at the proper time for it. But the very fact that the Master of the house is ultimately going to judge his appointed servants as to their faithfulness in carrying out their assigned kitchen duties indicates that Jehovah does not personally prepare or serve the spiritual food of his servants. It would seem more appropriate, certainly more modest, if the Watchtower would instead credit Jehovah for having provided the Bible and the arrangement or provision, whereby older men offer God’s people spiritual encouragement. 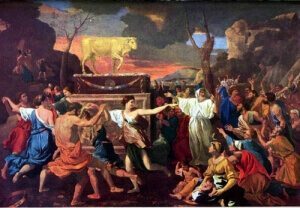 Given the deeply ingrained historic tendency for humans to desire some sort of visible representation (idol) of the invisible God, the Watchtower ought to be extremely guarded about exalting itself in such subtle ways. Regrettably, the Watchtower not only has failed to caution Jehovah’s Witnesses about placing too much importance upon the organization, it encourages the very exaltation of itself as Jehovah’s visible representative. But, instead of giving Jehovah glory, crediting Jehovah for doing something that is merely a human endeavor only serves to blur the distinction between God and a mere earthly institution.

An interesting parallel exists in the Scriptures, which, as Paul said, were written as instructive warning examples for Christians. One such instructive example is the account in Exodus about the golden calf. The Bible record relates that when Moses was in the mountain for 40 days receiving the Law from Jehovah, the people felt like Moses had abandoned them and so they demanded that Aaron fabricate a golden calf and lead them in worshipping it. The parallel exists in the fact that Moses represents Christ, in that instance. Consider that Moses was the mediator of the Law covenant, just as Jesus is the mediator of a new covenant. Moses came down from the mountain glowing like the sun, just as Jesus is going to come down from heaven in glory to finalize God’s covenant. Jehovah appointed Aaron as the nation’s high priest and spokesman under Moses. Jesus appointed his brothers to serve as his under priests and ambassadorial spokesmen.

The 32nd chapter of Exodus relates that the Israelites reasoned that Moses had been gone a long time and they didn’t know if he was ever coming back down from the mountain, so they demanded to have a new god to lead them through the Wilderness. As the God-appointed high priest, Aaron acquiesced to the demands of the people and made them a golden god and presented it to them as their God that led them out of Egypt and he declared that a festival be held in Jehovah’s honor.

In our day it seems that Jesus has been a long time in coming. Evidently some assume that Christ is going to be a no-show. In the interim the faithful and discreet slave/priest has been called upon by Jehovah’s Witnesses to step into the perceived void and provide leadership, and in so doing it seems that the Watchtower institution has gradually been transformed into our very own organizational golden calf.

Just as with the ancient Israelites, the golden calf was seemingly not intended to replace God; it was merely used as a visible representation of him. In the same manner the Watchtower constantly refers to itself as “Jehovah’s visible organization.” Subtly, the Watchtower has become the visible representation of Jehovah in the eyes and hearts of Jehovah’s Witnesses. Contrary to Paul’s revelation that Christians are walking by faith not by sight, we ought to be on guard against attaching such high honors to any earthly organization.

At this point such subtle idolatry appears relatively benign. But, we might ask, given the fact that Jehovah’s Witnesses are expected to give the organization their unquestioning obedience, what happens if, during the critical time of upheaval and tumult, the Watchtower becomes completely controlled by “superfine” satanic agents from within? What then? Is that unlikely? Not really. It would be a most fitting final test of our loyalty and faith in Jehovah.