The great crowd who come out of the great tribulation

The great crowd who come out of the great tribulation

In 1935, Jehovah’s Witnesses came to realize that the great crowd do not literally have to be in heaven to stand “before the throne and before the Lamb.” Rather, their position is figurative. Even though they would live on earth, the great crowd could stand “before the throne” by recognizing Jehovah’s authority and by submitting to his sovereignty. (Isa. 66:1) They could stand “before the Lamb” by exercising faith in Jesus’ ransom sacrifice. Similarly, at Matthew 25:31, 32, “all the nations” —including the wicked— are said to be “gathered before” Jesus on his glorious throne. Clearly, all these nations are, not in heaven, but on earth. This adjusted understanding makes sense. It explains why the Bible does not say that the great crowd is raised to heaven. Only one group is promised everlasting life in heaven —the 144,000, who will “rule as kings over the earth” with Jesus. —Rev. 5:10. w19.09 28 ¶9

The truth is so simple. Profound to be sure, but easily understandable provided one has an honest heart and a childlike disposition before God.

When I read today’s text just for fun I “googled” the phrase “who is the great multitude of Revelation 7:9? “Great multitude” is the way it is translated in the King James and NIV and other popular versions. It is laughable to see these “theologians” fumble around and try to explain something that is beyond their capability to grasp.  It is amazing to me that it took the Watchtower so long to figure it out.

In any case, the 7th chapter of Revelation makes it clear that the great multitude is people on earth. How so? Verses 15 and 16 go on to say that God will spread his tent over them and “They will hunger no more nor thirst anymore, neither will the sun beat down on them nor any scorching heat, because the Lamb, who is in the midst of the throne, will shepherd them and will guide them to springs of waters of life. And God will wipe out every tear from their eyes.”

There is a definite contrast between those who are described as coming out of the great tribulation with those who receive the first resurrection. The first resurrectees will be immortal. The second death has no authority over them. They will not need to be shepherded or guided to the waters of life. They will have life in themselves, exactly as do Jehovah and Jesus.

Further, God is said to spread His protective tent over the great crowd. That is exactly what is expressed in the 21st chapter as well, where it is made abundantly clear that those who come under God’s tent are people on earth: With that I heard a loud voice from the throne say: “Look! The tent of God is with mankind, and he will reside with them, and they will be his people. And God himself will be with them. And he will wipe out every tear from their eyes, and death will be no more, neither will mourning nor outcry nor pain be anymore. The former things have passed away.”

Imagine God residing with mankind. That would be absolutely wonderful because God originally resided with Adam and Eve. Jehovah would take a leisurely stroll through the lovely garden of Eden about the breezy part of the day and He and Adam would have a chat. Of course, in the future, God will be represented by His Son and the 144,000. But still, Jesus and his brothers will be filled with the fulness of the Father and reflect his glory in full measure.

WHEN IS THE GREAT CROWD?

There is a reason Rutherford understood the identity of the great crowd. It was time for that truth to be revealed. And since 1935 the core message publicized by the Watchtower has been focused on the paradise to come. Still, though, there is something lacking in the Watchtower’s understanding. Although it is proper to make a distinction between those with a heavenly hope and those who hope to live on earth in paradise, the great crowd does not presently exist. That is because the great crowd is distinguished by their coming out of the great tribulation. Since the great tribulation has not occurred no one can boast of coming out of it

Obviously, though, Jehovah’s Witnesses expect to survive the coming tribulation and I am certain a great crowd will. It is just that no individual can boast of being a survivor of a holocaust that has not occurred yet.

There is another aspect to this whole question of the great crowd, and that is, what is the great tribulation that they come out of? 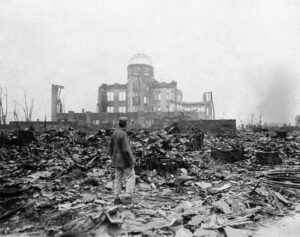 Back in 1935 when Rutherford introduced Jehovah’s Witnesses with an earthly hope as the “great multitude” it was a different age. For lack of a better term let’s call it the pre-atomic age, because just 10 years after the Watchtower shed light upon the identity of the great multitude (Before the NWT) the United States exploded two atomic bombs over the Japanese cities of Hiroshima and Nagasaki —ushering in the atomic age.

Even more ominous, the two original atomic bombs were simply dropped from a lumbering propeller-driven aircraft. Now even intercontinental ballistic missiles have become obsolete since the technology has advanced to arm hypersonic missiles with atomic warheads. Hypersonic missiles are virtually indefensible. And although there are treaties preventing such, it is technologically feasible to place thermonuclear devices in orbiting satellites that could rain down fire with the push of a button. It is entirely possible that such devices have already been secretly placed in the heavens. It is interesting to note that Revelation 13:13 says of the lamb-like beast that begins speaking as a dragon, which is to say it channels the voice of Satan himself, that “it performs great signs, even making fire come down out of heaven to the earth in the sight of mankind.”

However, the Watchtower embraces the error that the great tribulation and the desolation of antitypical Jerusalem have to do with the destruction of Babylon the Great. If that were true, though, why did Jesus give explicit instructions to his disciples to flee out of the midst of the holy city when they see the disgusting thing standing where it ought not? Have not Jehovah’s Witnesses already gotten out of Babylon the Great? Further, if the great tribulation is God’s means of eliminating false religion why would God cut it short? Indeed, why would it be necessary for God to cut short the tribulation on account of the chosen ones? Obviously, the Watchtower does not have a grasp of things as it ought.

The great tribulation coming upon the entire inhabited earth will imperil everyone. God will cut it short and prevent Satan from obliterating mankind and the earth itself. No doubt the tribulation will involve nuclear weapons. It is even so written: “And I will give wonders in the heavens and on the earth, blood and fire and columns of smoke. The sun will be turned into darkness and the moon into blood before the coming of the great and awe-inspiring day of Jehovah.” — Joel 2:30-31 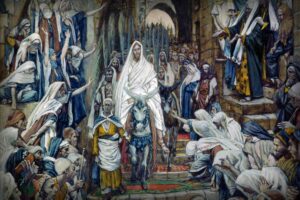 Thank God there have only been two nuclear bombs unleashed upon hapless flesh. It is most probable that the angels have prevented any accidents or demonized madmen from triggering a nuclear firestorm. That will not always be the case though. The “fire and columns of smoke” are no doubt in reference to the blinding fireball and signature mushroom cloud resulting from the detonation of thermonuclear bombs. With over 10,000 of these horrific weapons standing at the ready it is no wonder Jehovah will have to intervene to prevent the utter extinction of our race.

There is one thing the coming war and tribulation will do. It will utterly annihilate the Watchtower’s stupid prophets. 1914 will collapse like a broken-down wall. It will become apparent to the chosen and the great crowd that Jesus has begun ruling during the holocaust. That is why the great crowd are depicted as having palm branches in their hands. Recall that when Jesus came to Jerusalem for the last time riding upon a donkey the Jews spread palm branches before him and waved them declaring a blessing upon the savior who comes in the name of Jehovah. The great crowd will be those who hail Jesus as earth’s new King and the Savior of Jehovah’s people during the worst calamity in history.