The fall of America in the time of the end

The fall of America in the time of the end

America has had a special role in the outworking of Jehovah’s purpose. In what way?

Knowing, as we do, that God’s purpose is to have the good news preached throughout the earth, it was obviously by divine providence that the reappearance of an anointed congregation in the latter part of the 19th century took place in Western Pennsylvania, U.S.A.

America was a fertile seedbed for the truth back then. Not only had it been settled originally by devout, Bible-reading, pilgrims seeking refuge from the tyranny of the churches of Europe, but the nation-builders who followed them purposely enshrined in their Constitution and Bill of Rights protections that have facilitated the work of the International Bible Students and Jehovah’s Witnesses to this day. And, of course, other nations have since aspired to the same kind of government. 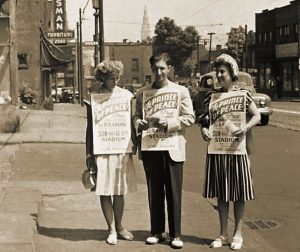 And even though America has been involved in both world wars, because two great oceans insulate it from the more tumultuous Eastern Hemisphere, the homeland has never been wracked with war. In that respect, and in many other ways, God has blessed America — presumably, specifically so that his people may accomplish their assigned work. As Paul exhorted: “First of all, then, I urge that supplications, prayers, intercessions, and thanksgiving be made concerning all sorts of men, concerning kings and all those who are in high positions, so that we may go on leading a calm and quiet life with complete godly devotion and seriousness.”

The Scriptures make clear, though, that calm and quiet life that God has allowed is a temporary provision that facilitates the preaching and teaching work. The end phase will be marked by a great, worldwide upheaval and the crash of the Anglo-American superpower.

Needless to say, the Scriptures do not mention the United States by name. America is, though, represented in prophecy by the former preeminent power —Egypt. This connection has been published on the Internet since 2003 and a chapter in Jehovah Himself Has Become King is devoted to the topic.

The book of Revelation also uses Egypt in a symbolic way, saying that the two anointed witnesses are killed in Egypt, where their Lord was also executed. Jesus was not, of course, impaled in Egypt. But, he was tried and sentenced to death by a government official of the Roman Empire and Roman soldiers carried out the deed. Rome had by that time annexed Egypt and being part of the same beastly system going back to the Egypt of the Pharaohs, Rome was “Egypt” in Jesus’ day.

The 30th chapter of Ezekiel foretells the conquest of Egypt by Babylon. But there is more to it than ancient history. The downfall of Egypt is revealed to be an appointed time of judgment for all the nations. Indeed, the fall of “Egypt” occurs during the day of Jehovah. “This is what the Sovereign Lord Jehovah says: ‘Wail, ‘Alas, the day is coming! For the day is near, yes, a day of Jehovah is near. It will be a day of clouds, an appointed time of nations.’”

The prophecy goes on to state: “A sword will come against Egypt, and panic will overtake Ethiopia when the slain fall in Egypt; its wealth is taken and its foundations are torn down. Ethiopia, Put, Lud, and all the mixed populations, and Chub, along with the sons of the land of the covenant, by the sword they will all fall.”

Interestingly, the prophecy regarding the conquest of the king of the south during the time of the end says the same thing as regards Egypt’s wealth being taken and its allies —the Libyans and the Ethiopians —being made subservient to the king of the north. (Put and Lud have been identified with the Libyans of ancient times.)

From its humble revolutionary beginning, becoming the sanctuary for the poor and downtrodden, America became the land of opportunity for millions and the champion of freedom worldwide. America was instrumental in defeating the Nazis in WWII and stood as a formidable bulwark against the spread of Soviet communism. But all of that is in the past. America is now loathed as the great oppressor.

Particularly since 911 the United States and its NATO allies have spread death and destruction across Northern Africa, the Middle East and South Asia. Increasingly under the influence of British imperialism, America crushes lesser nations with economic sanctions and currency manipulation. It trains and deploys armies of terrorists, all the while pretending to be fighting a war against terrorism. It orchestrates coups, false flag incidents and outright regime change across the world while preaching about democracy and human rights. America unabashedly proclaims it is bringing liberation to the very nations and peoples it arbitrarily destroys. Like a true dictatorial tyrant, it lays claim to American exceptionalism —being above the law to which it holds lesser nations. What utter arrogance and hypocrisy!

Appropriately: “This is what Jehovah says: ‘The supporters of Egypt will also fall, and its arrogant power will be brought down.’”

At Ezekiel 30:18-19 Egypt is again described as arrogant. “Her arrogant power will come to an end, clouds will cover her, and her towns will go into captivity. I will execute judgment on Egypt, and they will have to know that I am Jehovah.”

We should not suppose, though, that God is going to destroy the modern Egyptian tyrant directly. Just as Egypt was conquered by Nebuchadnezzar, who was acting as Jehovah appointed executioner, the nations are similarly going to be subjected to a king far more tyrannical than America is. But that is a topic for another day.

Jesus taught that the time of the end, or the conclusion of the system of things as it is alternatively called, is also like a harvest. Jesus said the harvest is a conclusion of a system of things. During the harvest, Christ will send forth his angels who will function as reapers. First, they will collect the weeds out from Christ’s Kingdom. Then the sons of the Kingdom will be distinguished —shining as brightly as the sun. Common sense ought to teach us that the harvest is not carried out over successive generations, but is swift, decisive and final. In any event, according to Jesus, the conclusion is marked by war. Indeed, by the utter crash of the system —symbolized in Revelation as a seemingly fatal wound to the head of the wild beast.

Although Jehovah’s Witnesses are laboring under the delusion that the harvest began in 1914 and that somehow, inexplicably, the Devil-sown weeds have been bundled and burned over the course of 104 years and all things that cause stumbling have been permanently removed from Christ’s Kingdom, the coming crash of America will provide the necessary, powerful jolt to awaken many to a new reality —the reality of the authentic presence of Christ. After all, the Second Coming of Jesus Christ is what initiates the time of the end.

Throughout the course of history many great nations and empires have come and gone; nevertheless, the coming downfall of America will be unique –not just in the fact that it was foreshadowed by the fall of Egypt 2,500 years ago, but that it will be part of the awe-inspiring judgments to be unveiled during the day of Jehovah.