The End of the Watchtower’s Hypocrisy

The End of the Watchtower’s Hypocrisy

It is not a desirable thing with my Father who is in heaven for one of these little ones to perish.—Matt. 18:14.

Jehovah cares deeply about all those who have expressed love for his name, even if they are not actively serving him at present.  Are you among those who are not now actively serving God? Perhaps someone in the congregation hurt you and as a result you stopped associating with Jehovah’s organization. Since some time may have passed, ask yourself: ‘Is my life now more meaningful, and am I happier? Was it Jehovah who offended me, or was it an imperfect human? Has Jehovah God ever done anything to harm me?’ Really, he has always done good toward us. Even if we are not living up to our dedication to him, he allows us to enjoy the good things he provides. Soon, Jehovah’s day will come. Now is the time to return to our heavenly Father’s loving arms and to the congregation—the only safe haven in these last days.

Is is too bad the Watchtower cares so little for the multitudes of Jehovah’s Witnesses it has stumbled.

While Bethel obviously is aware of the growing numbers of inactive JW’s, it hypocritically refuses to acknowledge that the organization bears any responsibility for this developing trend.

“Perhaps someone in the congregation hurt you”?

That is certainly possible. It may be that that “someone” in the congregation is a pedophile that Bethel’s lawyers ordered the elders not to expose. There, are, after all thousands of pedophiles lurking within the congregations. And those are just the ones whose names are on file at Watchtower headquarters. 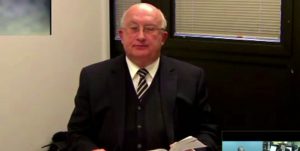 If the Watchtower were really concerned about those who have been hurt by someone in the congregation, acknowledging their responsibility in imposing a hurtful policy of secrecy upon those congregations would be the honest thing to do.

But the Watchtower is not honest in these matters.

Although Geoffrey Jackson stated before the Australia Royal Commission that the Governing Body may consider compensating child abuse victims in Australia, what about the many more thousands of victims in the United States and in the UK, and elsewhere? Why would the WT only compensate a fraction of victims and continue to be the legal adversary of the rest?

It is as Jehovah foresaw centuries ago: Their heart has become hypocritical.

But that last sentence: Is the congregation the only safe haven in these last days? Since, as the WT noted, Jehovah only provides good things, how could God possibly have provided a safe haven organization that is also rife with pedophiles and other harmful persons? Obviously he wouldn’t. Not only that, since the time of the end has not commenced the real safe haven is something God will provide in the future and it will require Jehovah’s Witnesses to abandon the Watchtower organization.