Prove yourself faithful even to death

Prove yourself faithful even to death

The world has suffered from the ravages of demonic tyrants and ruthless rulers since Nimrod stood up as a mighty hunter in opposition to Jehovah a long time ago. In more recent times peoples have been killed in mass by the likes of Hitler, Stalin, Mao, Pol Pot, and others besides.

The real tyrant, though, is, of course, Satan the Devil. Jesus said he is the father of the lie and he began his course of opposition to Jehovah by misleading the first humans into death. As a portent of things to come the very first human born to the original parents became a murderer. Four thousand years later the apostle of Christ explained: “For this is the message that you have heard from the beginning, that we should love one another; not like Cain, who originated with the wicked one and slaughtered his brother.” — 1 John 3:11-12

No wonder the world is such a mess. Its god is a liar and a mass murderer. Satan is ultimately responsible for every human death in history, but especially for the millions who have been slaughtered in senseless wars.

When Jesus was on earth the Devil approached him with a tempting offer. “Bow down to me,” the Tempter said, and I will give you all the kingdoms of the world. Jesus refused. 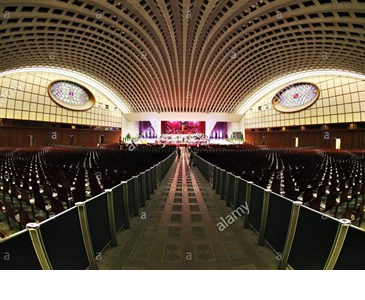 Although Satan rules from the invisible he requires humans to carry out his work. Most do so unwittingly. However, some people who lust for power, wealth and fame, willingly do the Devil’s bidding. No one should doubt that there are satanic cults whose members knowingly worship the wicked one.

If you have ever seen a picture of the Vatican Audience Hall you would think you are face-to-face with a giant serpent. And you thought the Watchtower’s eye of Horus assembly hall was creepy!

The Devil gives his worshippers what they crave, provided that they do his bidding. The demons might require that the initiate rape or even murder a child in order to prove they can be trusted. And sad to say, many of the people who commit these dark deeds are running the world —for now anyway.

There are those who pretend to be light-bearers who speak of the satanic cabal, the Illuminati, or whatever, and how they must be defeated. Really? How can humans overthrow evil superhuman angels?

It is not my intention to delve into the deep things of Satan, but it is important to know the enemy. Right now, as never before in modern times, we are witnessing the slow but inexorable rise of the so-called Luciferian cult. They have until now been lurking in the shadows. For the past few centuries, there has at least been a veneer of Christian civility.

America, especially, once founded by devout pilgrims who revered God and whose progeny established one nation under God with liberty and justice for all, a nation that stood like a city on the hill —a beacon of light for the world, is under assault. The last king is coming and he will be the earthly manifestation of Satan the Devil himself.

Concerning this development, the visionary of Revelation wrote: “Then I saw another wild beast ascending out of the earth, and it had two horns like a lamb, but it began speaking like a dragon.  It exercises all the authority of the first wild beast in its sight. And it makes the earth and its inhabitants worship the first wild beast, whose mortal wound was healed. And it performs great signs, even making fire come down out of heaven to the earth in the sight of mankind.” — Revelation 13:11-13

Eventually, God Almighty will blow the lid off the whole wicked cosmos and expose the world and its rulers as the beastly creatures that they are. That is what the apostle was writing about here: “But Jehovah’s day will come as a thief, in which the heavens will pass away with a roar, but the elements being intensely hot will be dissolved, and earth and the works in it will be exposed.” — 2 Peter 3:10

There once was a tyrant named Nebuchadnezzar. God allowed the King of Babylon to conquer a vast part of the known world. In fact, God commissioned the mighty army of Babylon to function as His punishing agent. However, Nebuchadnezzar had to be humbled. An angel drove him off his throne and for seven years he lived like a beast in the field. Then, at the appointed time, God restored him to his kingdom.

That was extraordinary, considering what men are, and that other men hungry for power would likely have been reluctant to give the former king his throne back. But the purpose of God’s intervention was explained by Daniel before the king was driven from his palace: “This is by the decree of watchers, and the request is by the word of the holy ones, so that people living may know that the Most High is Ruler in the kingdom of mankind and that he gives it to whomever he wants, and he sets up over it even the lowliest of men.” — Daniel 4:17

Jehovah has demonstrated His ability to do this very thing —to set up the lowliest one as a ruler of great nations. Take Joseph, for example. He was sold by his own brothers into slavery. As a slave he originally had it pretty good, working in the house of Potiphar, an official in Pharaoh’s court. Then he was thrown into prison on false charges, where he languished for two years. From there, the lowest place other than the grave, God empowered Joseph with the ability to interpret dreams. Upon hearing of a certain prisoner’s ability Pharaoh summoned Joseph to interpret his dreams. And because he did Pharaoh appointed Joesph as the prime minister of all of Egypt. From the jailhouse to the throne.

Daniel too was similarly elevated from captivity to a high position in both the kingdoms of Babylon and Persia. There was Esther too. Jehovah exalted the lowly Hebrew beauty to become the queen of Persia.

To further demonstrate that God is the One who lifts up the lowly and places them as rulers, so there could be no doubt it was by divine power, Daniel was rescued from the lion’s den —the very same lions that devoured Daniel’s false accusers. And the three Hebrews who walked out of the flaming crucible unscathed were also promoted to high positions in the kingdom of Babylon.

These are not just Bible stories. They are portents from God. A portent is an indication of something that will happen in the future. And what is that? Jesus spoke to his called ones in the symbolic congregations of Revelation that will exist on earth when the day of the Lord commences. To those in Smyrna the Lord wrote: “Do not be afraid of the things you are about to suffer. Look! The Devil will keep on throwing some of you into prison so that you may be fully put to the test, and you will have tribulation for ten days. Prove yourself faithful even to death, and I will give you the crown of life.”

Notice the same scenario —from prison to wearing the crown of immortal life. Jesus concluded his messages to the seven congregations saying: “To the one who conquers I will grant to sit down with me on my throne, just as I conquered and sat down with my Father on his throne. Let the one who has an ear hear what the spirit says to the congregations.”

Conquering will require refusing the mark of the beast and finishing the final witness.

So while liberals and globalists work to overturn the existing order and conservatives and patriots are struggling to maintain the present system, the real war has not begun yet. Forget the Watchtower’s 1914 delusion. Get it out of your mind. It is a satanic operation to deceive the chosen ones into imagining the war is on now. It is not. But given the tumult building in the world, the end must be close. The beginning of the time of the end, that is.

“So the dragon became enraged at the woman and went off to wage war with the remaining ones of her offspring, who observe the commandments of God and have the work of bearing witness concerning Jesus.” — Revelation 12:17

The Biden administration is very close to handing the World Health Organization power over every aspect of your life. Imagine the civil liberties abuses of the Covid lockdowns, but permanent.