A subliminal image is a picture within a picture – a graphic cleverly imbedded within another image that is intended to bypass the conscious mind undetected, but which is perceived on a subconscious level.  How a person might be affected subconsciously is a matter of debate.

I first became aware of subliminals back in the early 1970’s, having become acquainted with the prevalence of the techniques through a couple of books written by Wilson Bryan Key, one of which was titled: Subliminal Seduction. 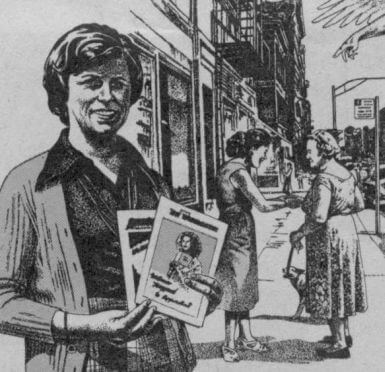 My earliest awareness of subliminal imagery in Watchtower literature was back in 1983. Some of Jehovah’s Witnesses who have been around for a few years might remember the February 1st issue of the watchtower Magazine that year that had an artist’s rather crude sketch of a couple of Jehovah’s Witnesses preaching on a city street with a clean-shaven, ephemeral angel hovering above them, presumably directing their ministry. But subtly camouflaged in the lower left side of the dress of the lady in the background – who appears to have a dog on a leash – was a bearded, Zeus-like face of a man.

It was not even particularly well hidden, as a 12-year old sister, the daughter of the presiding overseer of our congregation at the time, innocently pointed it out to a number of us after the Watchtower Study. It was one of those things, though, that after it was pointed out you say to yourself: Why didn’t I see that? It seemed rather obvious.

The strange little smudge of an image caused quite a little stir in our congregation, so much so that one of the elders felt compelled to mention it from the platform. Ironically, the presiding overseer whose daughter had spotted the bearded face gave a Service Meeting part a few days after the Watchtower Study and rebuked the congregation for even thinking that the Society’s literature could contain subliminal images.

It was a bizarre gaslighting experience, to be sure; to be told that what you see with your own eyes is not really there. I must say, that the local elders’ perverse denial of reality was more disturbing than the actual subliminal image itself, which at the time I passed off as the childish prank of a mischievous Bethel artist.

But the local elders were not alone in denial. About a year later the Watchtower also backhandedly acknowledged the subliminal image flap by claiming it was a ridiculous and unfounded rumor, strangely, likening it to the “Paul is dead” publicity stunt during the Beatles’ heyday. Here’s a little blurb from the September 1st, 1984, Watchtower:

Some years ago it was widely believed that a member of the singing group the Beatles had died in an auto accident and had been replaced by a double. Even the Watchtower Society’s publications have been the subject of rumors for example, that one of the artists had secretly been introducing pictures of demons into the illustrations, was subsequently found out and disfellowshiped!…Certainly, the rumor concerning the Society’s publications was harmful, as well as slanderous to the zealous Christians who work long hours producing artwork to make the magazines, brochures and books so attractive. This was as ridiculous as it would be to say that God, in creating celestial bodies, deliberately formed the appearance of a man in the moon.

But seeing is believing, as the saying goes. It was not a rumor. It was not the product of imagination on the part of thousands of readers who surely must have noticed the image. It was a camouflaged face of a man, as can be seen in the graphic. Of course, the skilled subliminal artist endeavors to camouflage the image in such a way so as to trick the eye into not seeing what is before it so that those who do not wish to see it can easily excuse themselves from acknowledging the existence of the subliminal.

At any rate, that was more than 25 years ago; however, since then much more evidence has surfaced proving that Watchtower literature contains grotesque, satanic, subliminal images and occult symbols. According to the evidence presented on a number of websites, it would appear that subliminal artwork has become much more sophisticated than the somewhat amateurish image that appeared in the pages of the Watchtower in 1983. But the Society was truthful about one thing in their denial: apparently, it was just a rumor that the artist had been disfellowshipped!

The Watchtower’s artists have Jesus performing some sort of resurrection on a creepy demon figure, with Satan overseeing the ritual, with the masonic triangle in the foreground. 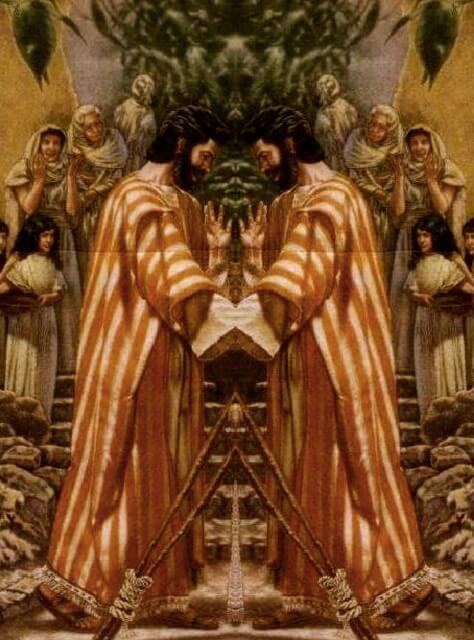 The technique used by the artist(s) involves folding the page and mirroring the image. I darkened the image a bit in a photo editor so that the background stands out more. The original picture was Jesus healing a man on crutches. But in the mirrored image Jesus appears to be performing some sort of ritual with a ghoulish man lying in a coffin (notice the head above the outstretched hands) and Satan in the background presiding.
.

Satan could not get Jesus to worship him when he was on the earth, but apparently, he takes delight in pretending he did.

The women seem pleased. Notice, too, how the man’s crutch becomes a masonic triangle with a sash hanging down. 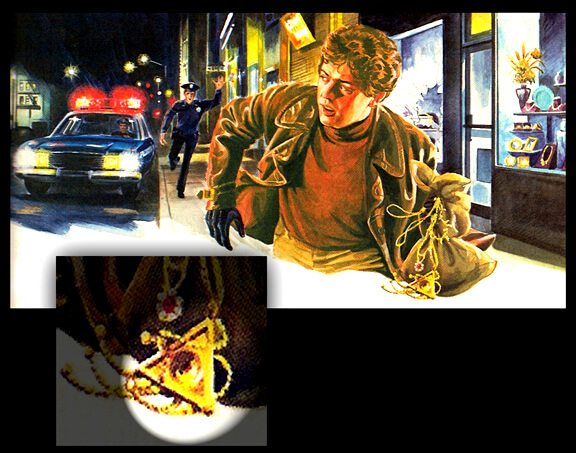 Now, here is a normal Jehovah’s Witness family. (below) They keep a framed picture of their pet ram on the end table.

Ram’s heads and goat-headed figures are camouflaged into many Watchtower graphics, but this one is not even disguised. It is blatant. (Notice the picture on the lamp table) How many homes have you been in where people display framed portraits of a ram head? Interestingly, the Bible speaks of goat-shaped demons. Evidently, that is how the demons depict themselves. 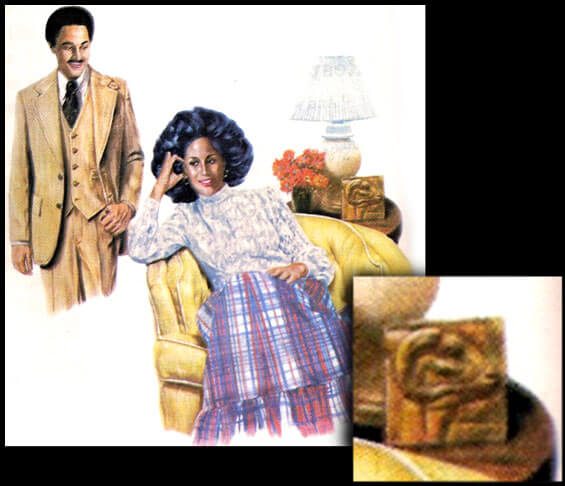 Some might be inclined to dismiss the examples presented. However, my personal conclusion is that they are real and that the Watchtower Society has probably been infiltrated by a secret coven of Devil worshippers; evidenced not only by the subliminal imagery, but also by such things as the Society’s irrational attachment to 1914; their hypocritical NGO affair and their lying denial of it, as well as their callous refusal to accept any responsibility to protect the children in the congregation from sexual predators.

However, whereas anti-Watchtower groups and ex-Jehovah’s Witnesses alike have tried to use such things as proof that the Watchtower is not Jehovah’s organization, the presence of such evils is consistent with the fact that the demons have always sought to insinuate themselves into the midst of the leadership of God’s people. They are demons, after all! 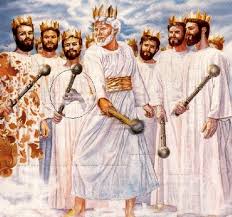 In reality, from the very beginning of the Watchtower Society there has always been the presence of occult symbols, like Charles Russell’s fascination with pyramidology; the use of the Masonic and Templar’s symbol of the cross and the crown; the occultic winged sun that appeared on several books; the promotion by the Society of the occultic book Angels and Women, which was advertised as having been dictated by a “fallen angel.”

However, whereas anti-Watchtower groups and ex-Jehovah’s Witnesses alike have tried to use such things as proof that the Watchtower is not Jehovah’s organization, the presence of such evils is consistent with the fact that the demons have always sought to insinuate themselves into the midst of the leadership of God’s people. They are demons, after all! Let’s not be naïve as to their powers and intentions.

Lot’s of creepy stuff going on in this one (below). 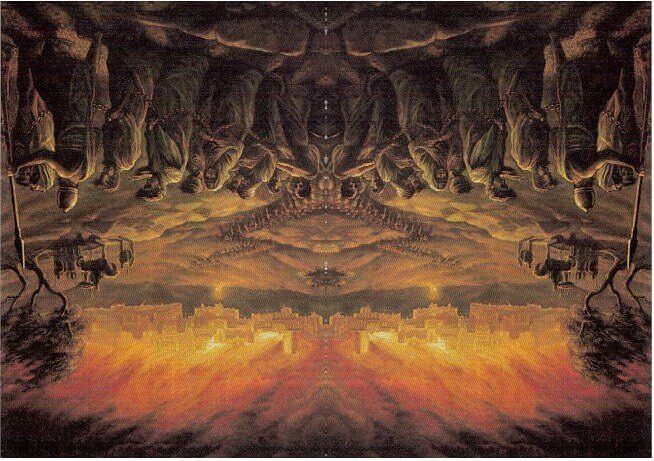 Besides, the appearance of disguised demonic images in the Society’s literature is probably not intended to mentally influence Jehovah’s Witnesses anyway. It would appear that the presence of such images is akin to the animal practice of urinating to mark off territory. More than likely it is Satan’s way of coyly flaunting his presence within the intimate circle of the anointed congregation by attaching himself to something dedicated to Jehovah in order to desecrate it – similar to how the insidious influence of Baal in the Israelite nation manifested itself through the display of various crude and lewd images, which the demons successfully introduced into the very temple of Jehovah.

THE STRANGE GOD AMONG YOU

The presence of such evils within the organization is simply another manifestation of “the mystery of this lawlessness” at work in the house of God, which Paul foretold would emanate from a man of lawlessness “according to the operation of Satan.”

Contrary to the conclusions some would have us reach, the presence of Satan within the congregation does not discount the fact that it is Jehovah’s organization. The Scriptures plainly indicate that Satan will be present within Jehovah’s organization up until the actual judgment is executed against him. That is evident from the very prophecy from which Jehovah’s Witnesses have derived their distinctive name – Isaiah 43:12. That verse reads:  “I myself have told forth and have saved and have caused it to be heard, when there was among you no strange god. So you are my witnesses,” is the utterance of Jehovah, “and I am God.” 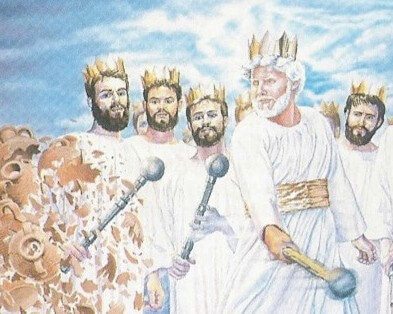 It is apparent in so many ways, including the prevalence of hidden occult images in the Society’s literature, that there is indeed a “strange god” lurking within. What is the solution? The next verse of Isaiah’s prophecy foretells how Jehovah will deal with the situation, posing the question: “I shall get active, and who can turn it back?”

“Accordingly he brought me to the entrance of the courtyard, and I began to see, and, look! a certain hole in the wall.  He now said to me: ‘Son of man, bore, please, through the wall.’ And I gradually bored through the wall, and, look! there was a certain entrance.  And he further said to me: ‘Go in and see the bad detestable things that they are doing here.’ So I went in and began to see, and, look! there was every representation of creeping things and loathsome beasts, and all the dungy idols of the house of Israel, the carving being upon the wall all round about.” – Ezekiel 8:8-10
.

“When an unclean spirit comes out of a man, it passes through parched places in search of a resting-place, and finds none. Then it says, ‘I will go back to my house out of which I moved’; and on arriving it finds it unoccupied but swept clean and adorned. Then it goes its way and takes along with it seven different spirits more wicked than itself, and, after getting inside, they dwell there; and the final circumstances of that man become worse than the first. That is how it will be also with this wicked generation.” – Jesus Christ 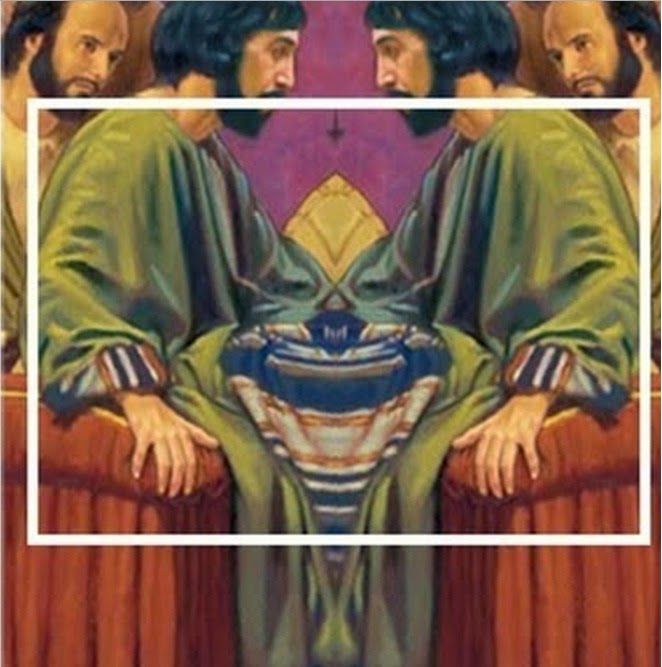 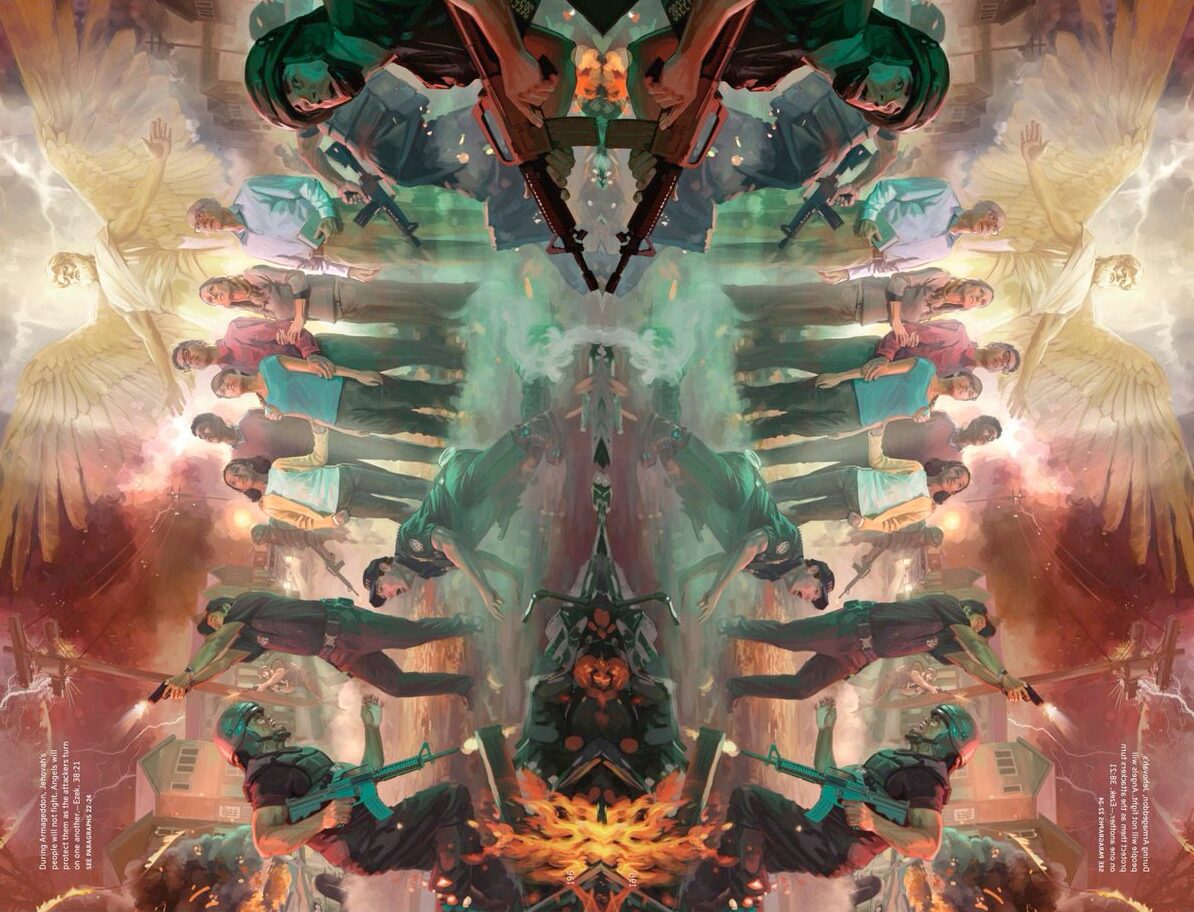