The springs of the watery deep

The springs of the watery deep 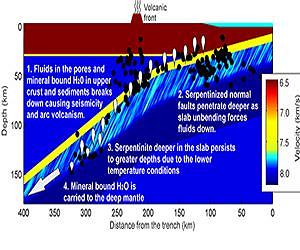 Scientists theorize that there is a vast ocean of water stored deep below in earth’s mantle, which seeped from deep ocean trenches. Water may extend into the earth nearly 100 miles and contain three times the amount of water in the surface oceans.

Interestingly, the Bible refers to this subterranean ocean in Genesis, where it states: “In the 600th year of Noah’s life, in the second month, on the 17th day of the month, on that day all the springs of the vast watery deep burst open and the floodgates of the heavens were opened…”

At II Peter the 3rd chapter the apostle also referred to this phenomenon, where he wrote: “For they deliberately ignore this fact, that long ago there were heavens and an earth standing firmly out of water and in the midst of water by the word of God; and that by those means the world of that time suffered destruction when it was flooded with water.”

Science has now confirmed that the Bible was not exaggerating, that there is a vast watery deep below the earth. No doubt since the Flood the waters have returned to their subterranean storehouse via gravity and tremendous water pressure.

“We’re not just at war to support the Ukrainians. We’re fundamentally at war, although somewhat through a proxy, with Russia, and it’s important that we win.” — Rep. Seth Moulton, D-Mass.

People have been driven crazy. A guy on a Harley goes roaring by, he was not wearing a helmet but he was wearing a Covid mask. I wish I had taken a picture. Unbelievable. 😂