A continuation of the examination of Jeremiah

The Jews were in a binding covenant with Jehovah God, which they repeatedly broke. After nearly 1,000 years Jehovah became determined to bring calamity on the covenant breakers. God even ordered Jeremiah not to pray on behalf of the Jews. God would not be listening to their pleas for help. Going on, Jehovah said: “What right does my beloved one have to be in my house when so many have carried out evil schemes? With holy flesh will they avert the calamity when it comes upon you? Will you exult at that time?” — Jeremiah 11:15

Anointed Christians are in a covenant with God too—the new covenant. In fact, it is the prophecy of Jeremiah that reveals that God will establish a new covenant.

Just as the Jews offended God by their insincere and corrupt worship, so too, the Watchtower with its Bethel—the center of the worship of Jehovah’s Witnesses, anointed and otherwise. Bethel, of course, means “house of God.”

And Bethel certainly has carried out many evil schemes. Besides their 10 year political partnership with the United Nations and the persecution of child abuse victims seeking redress, their profiting from the dispossession of hundreds of congregations of Jehovah’s Witnesses, now Bethel is carrying out a new evil scheme.

While every Kingdom Hall in the world has been padlocked for going on two years now, the schemers have set out on a “pilot program” to reopen a few facilities with the stipulation that no dedicated Christian may set foot in a Kingdom Hall unless they have received two injections of experimental serum as part of the UN’s global vaccination program. And interested persons seeking the truth may not enter a Christian meeting place under any conditions, even if they have been twice injected.

Jesus invited those toiling under a heavy load to come to him for refreshment. He once healed a contagious leper by touching him. But now only select individuals may come to Jesus. And even those who have been sanctified by mRNA genetic manipulation are required to wear face masks when inside a Kingdom Hall, as if even their every exhalation were unclean.

The Jewish priests offering up animal sacrifices (holy flesh) may have imagined that as long as they performed the rituals mandated by the law then no calamity would come on them even though they were also worshipping Baal.

The wicked schemers were also intending to kill Jeremiah. Why? What bad thing did he do? He was the messenger, speaking in the name of Jehovah. Jeremiah went on to say: “Jehovah informed me so that I would know; At that time you caused me to see what they were doing. I was like a docile lamb being brought to the slaughter. I did not know that they were scheming against me: “Let us destroy the tree with its fruit, and let us cut him off from the land of the living, so that his name may be remembered no more…” — Jeremiah 11:18-19

The Watchtower originally coined the phrase “Jeremiah class.” Supposedly, the Watchtower was the voice of the anointed prophets. Now it seems—like the men of Anathoth—the Watchtower has schemed to destroy any modern, truth-speaking Jeremiahs.

In the 12th chapter of Jeremiah the prophet voiced his complaint, saying to God: “You planted them, and they have taken root. They have grown and produced fruit. You are on their lips, but far away from their innermost thoughts.”

There is reason enough to believe that God “planted” the Watchtower to serve His purpose. As a publishing corporation that Watchtower has been hugely successful. It has certainly taken root and grown and produced fruit in the form of millions of religious adherents. As a result, the good news has been preached throughout the world—even as Jesus foretold.

From the beginning, the Watchtower has championed the name of Jehovah. J.F. Rutherford even changed the name of the Bible Students in order to identify them with God’s personal name. Jehovah is on their lips in that Jehovah’s Witnesses regularly speak the name. But what about deep inside where only God can see? Ah! According to God’s searching eyes, their innermost thoughts are devoid of the same devotion.

Shockingly, Jeremiah pleads with God to slaughter the false worshippers—his fellow Jews: “But you know me well, O Jehovah, you see me; you have examined my heart and found it in union with you. Single them out like sheep for slaughtering, and set them apart for the day of killing.” — Jeremiah 12:3

Responding to Jeremiah, Jehovah said: “If you get tired running with footmen, how can you run a race against horses? Even if you are confident in the land of peace, how will you fare among the dense thickets along the Jordan? For even your own brothers, the household of your own father, have dealt treacherously with you. They have raised a loud cry against you. Do not put faith in them, even if they speak good things to you.”

What did God mean? He was warning Jeremiah that things were going to get worse—much worse. If Jeremiah was tired of putting up with persecution during a time of relative peace, as if racing against other men, how would he be able to race against horses? In other words, Jeremiah was going to have to endure a time of distress and war. And even if the treacherous ones speak good things, spiritual things, do not put faith in them.

Jesus likewise warned his followers to be on guard, for many will be stumbled and hate one another and brothers will betray brothers and family members will deliver their own relatives to death. And there will arise many false prophets.

Even though Jehovah planted the nation, He was going to uproot it: “I have abandoned my house; I have deserted my inheritance. I have given my dearly beloved one into the hand of her enemies.” —Jeremiah 12:7

Jesus similarly told the Jews that their house had been abandoned to them. He went on to explain to his apostles that Jerusalem would be surrounded by enemies and trampled upon by the nations for an appointed time.

In the 13th chapter, Jeremiah relates a riddle to the Jews, saying: “‘Every large jar should be filled with wine.’ And they will reply to you, ‘Do we not already know that every large jar should be filled with wine?’ Then say to them, ‘This is what Jehovah says: “Here I am filling with drunkenness all the inhabitants of this land, the kings sitting on the throne of David, the priests and the prophets, and all the inhabitants of Jerusalem. And I will smash them against each other, fathers and sons alike,” declares Jehovah. “I will not show compassion or feel any sorrow or have any mercy on them; nothing will stop me from bringing them to ruin.”

The drunken priests and prophets cannot discern Jehovah’s judgments. The inebriated prophets claim that no calamity will befall them. In the 14th chapter Jeremiah reports to Jehovah that the prophets are saying that no sword or famine will come upon them. (14:13) Jehovah responds: “The prophets are prophesying lies in my name. I have not sent them or commanded them or spoken to them. A lying vision and a worthless divination and the deceit of their own heart is what they are prophesying to you. Therefore this is what Jehovah says concerning the prophets who are prophesying in my name, though I did not send them, and who say that no sword or famine will occur in this land: ‘By sword and by famine those prophets will perish. And the people to whom they are prophesying will be cast out into the streets of Jerusalem because of the famine and the sword, with no one to bury them—them, their wives, their sons, or their daughters—for I will pour out on them the calamity they deserve.’” — Jeremiah 14:14-16

Without question, the leadership of Jehovah’s Witnesses has promoted a lying vision—claiming Christ has come, that the Kingdom is reigning, that pure worship has been established at last—all in the name of Jehovah! The horsemen of the Apocalypse—war, famine, and pestilence—are nothing to be concerned about. It is all in the past. Just take the injections and everything will be alright. 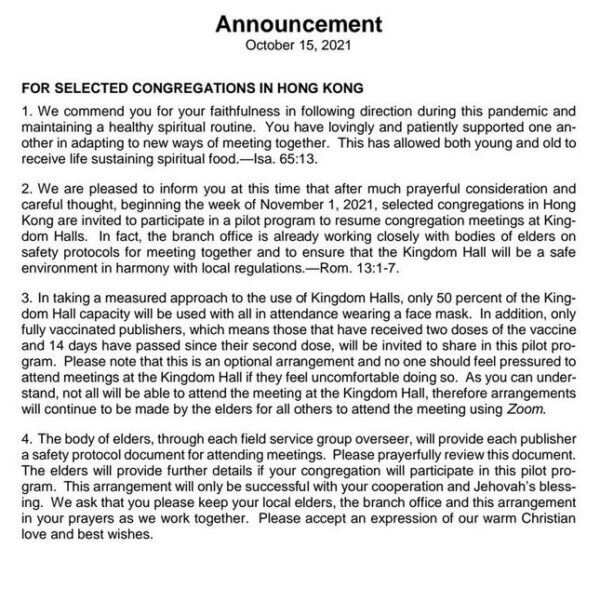 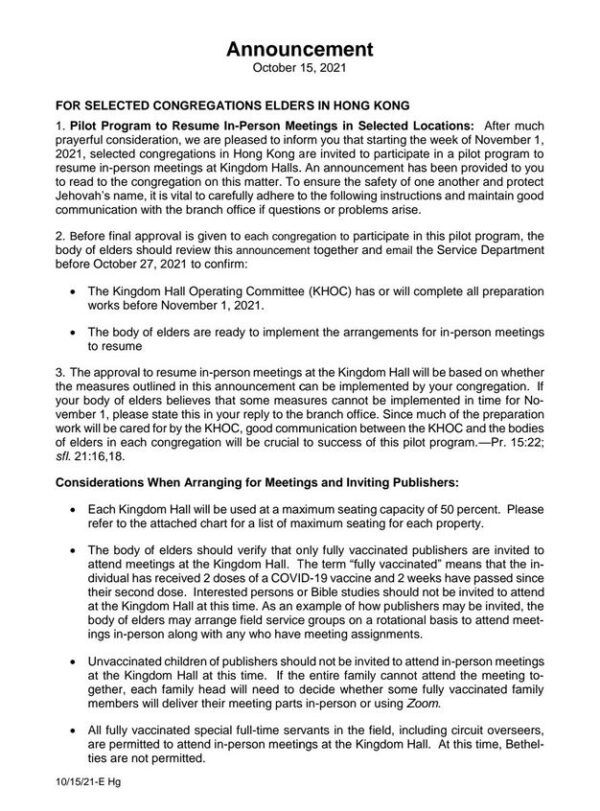 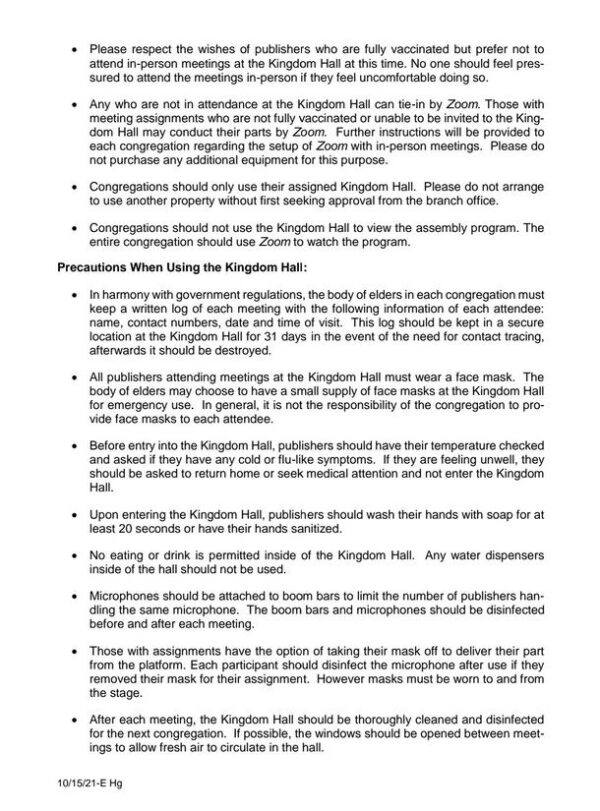 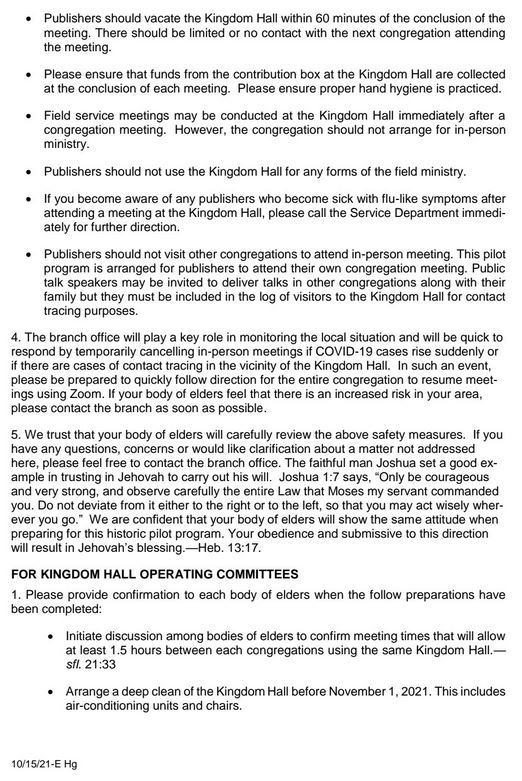