The showy crown of the drunkards of Ephraim

The showy crown of the drunkards of Ephraim

Abel likely gave much thought to that promise and realized that someone would be ‘struck in the heel’ so that mankind could be lifted to perfection such as that enjoyed by Adam and Eve before they sinned. Abel had faith based on God’s promise, and Jehovah therefore accepted his sacrifice. Noah survived the Deluge because of his faith. After the Flood, he was moved by faith to offer animal sacrifices. Like Abel, he undoubtedly had faith that mankind would eventually be released from bondage to sin and death. As he entered the dark post-Flood era during which Nimrod acted in opposition to Jehovah, Noah still had faith and hope. Very likely, he would have been heartened to think about mankind as being set free from oppressive rule, inherited sin, and death. We too can “see” such a wonderful time—and it is near indeed!—

Faith is the key that opens the door. No question about it. Abel had it. So did Noah. In his letter to the Hebrews Paul recounted many acts of faith on the part of those who lived before Jesus. The question is whether we have a similar kind of faith.

But longing for better times, yes, hoping even for the paradise that Jesus promised to the thief, does not necessarily mean we have faith. The problem for Jehovah’s Witnesses is that our faith is inextricably bound up with the Watchtower. How could it be otherwise? And due to some rather creative interpretation of prophecy, the Watchtower has effectively placed itself as the very Kingdom of God in the minds of the faithful.

As an example, take the prophecy in the 2nd chapter of Isaiah, which states: “In the final part of the days, the mountain of the house of Jehovah will become firmly established above the top of the mountains, and it will be raised up above the hills, and to it all the nations will stream. And many peoples will go and say: ‘Come, let us go up to the mountain of Jehovah, to the house of the God of Jacob. He will instruct us about his ways, and we will walk in his paths.’ For law will go out of Zion, and the word of Jehovah out of Jerusalem.”

Jehovah’s Witnesses are convinced that the final part of the days began in 1914. That is when Christ is believed to have begun ruling. And the elevation of the mountain of the house of Jehovah and the nations streaming to it is believed to be fulfilled in the numerical growth of Jehovah’s Witnesses. The law and instruction that comes from Jehovah is expressed through the visible organization. In that way the Watchtower publishing corporation has become inseparable from the Kingdom of God —at least in the minds of faithful Jehovah’s Witnesses.  And therein lies the problem.

It is problematic now, in that, when JW’s, or even persons who are just studying, are confronted with the Watchtower’s errors or on a more personal level, perhaps experience unkindnesses on the part of brothers and sisters, or even elders, then they may be stumbled. It becomes irreconcilable to them how the Kingdom of God could be thus and so. So, they are stumbled in their faith.

But the real stumbling block —at least potentially, is the fact that the entire 1914 thing is a sham. Christ did not in any way begin ruling over the world a century ago. The last days, or final part of the days, or time of the end, or conclusion of the system of things —whatever you choose to call it —has not begun. When it does you’ll know it. You won’t have to do any calculations, counting the years from 607 or whatever. The conclusion will be marked by wars, famines and pestilence on a scale never before seen —certainly far surpassing the horrors of the First World War and Spanish Influenza. 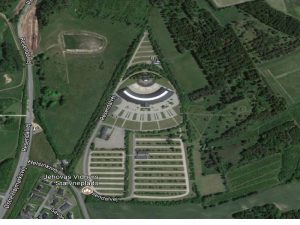 Of course, there is inevitably a sense of betrayal —and rightly so. The Watchtower has betrayed our trust. Just think how the Danish brothers and sisters will react when it comes to their attention that their outdoor assembly hall is really dedicated to the one-eyed demon god, Horus. No doubt those who have attended conventions there —maybe even being baptized in the eye of Horus —will be horrified at the treachery perpetrated against them. But it is wise to keep things in perspective. It is not primarily we who have been betrayed. Jehovah and Christ have been betrayed foremost. After all, they have not apostatized against us. It is Jehovah whom they have intentionally offended.

Some meek and kindly Jehovah’s Witnesses may believe me to be the apostate —or at least judge me to be much too harsh in my condemnation of the Watchtower. But I do not seek agreement with anyone or the approval of any human. My purpose has always been to announce Jehovah’s judgments —and if possible, bolster your faith in the word of God.

But whether anyone listens to me or not does not matter to me. I am absolutely certain at some point I will be proven to have been right. And as Jehovah said of Ezekiel, I lay claim to these words: “As for them, whether they listen or refuse to listen—for they are a rebellious house —they will certainly know that a prophet was among them.”

The Watchtower knows me. They know my message. I have distributed dozens of books and brochures among them over the years and mailed many thousands of letters to the elders at large. Too bad for the Governing Body that they will never humble themselves before Christ —not willingly anyway. On the contrary, just this past weekend they congratulated themselves for having built a magnificent corporate headquarters to rival the likes of any successful worldly corporation. What a showy display it is! And as new light they apparently have revealed that it is now okay, again, to refer to the vindication of Jehovah’s name.

Someone also brought it to my attention that a speaker at the annual meeting speculated that Jehovah would likely preserve the new world headquarters building through the battle of Armageddon.

How apt —Jehovah’s description of “the showy crown of the drunkards of Ephraim and the fading blossom of its glorious beauty, which is on the head of the fertile valley of those overcome with wine!”

While they have constructed a palatial residence for themselves, as if a showy crown for royal kings, the glory of the organization is indeed like a fading blossom. Evidently there is a full scale exodus underway with more than a half million fewer publishers now than a year ago. While the Governing Body have always boasted of the growth of the organization as proof of God’s blessing and fulfillment of Isaiah regarding the nations streaming in —what do the rapidly declining numbers indicate? Why is the Watchtower shuttering kingdom halls, selling them off and disbanding dwindling congregations? The bloom is off and there is nothing the drunkards can do about it, except stop publishing the yearbook. Eventually, they will have a sobering lesson to learn –Jehovah is not their corporate mascot.

Sadly, we can expect many to be stumbled going forward. But it doesn’t have to be that way. We can go forward in the truth —we must go forward in faith, even if all others fall away. Or are we mere followers of men after all?