The Secret Society of Lucifer

The Secret Society of Lucifer

The June 1st, 1997, issue of the Watchtower carried an article entitled “Secret Societies: How Great the Threat?” (**** In rechecking the above-mentioned issue it seems that the Watchtower has changed the article. My CD ROM doesn’t have the original article either. Maybe I am losing my mind, or perhaps the WT edited the article sometime after my original post was published in 2002.)

It gave a superficial overview of how some secret societies are believed to function and their purposes. While not terribly enlightening, the article ended affirming the question posed: “Yes, indeed. Who can really know how many secret groups may at this very moment be posing a threat greater than any of us might imagine”? The article following went on to mention several secretive religious cults, leaving the reader the impression that religious secret societies posed the greatest threat.

Anyone who has studied secret societies knows there are far more dangerous groups than the ones alluded to in the brief Watchtower article. It is the belief of many so-called “conspiracy theorists” that there is a tiered grouping, consisting of layers of semi-secret and secret societies, that are under the control of a singular, occultic, society of ultra-wealthy oligarchs. Some researchers believe that the upper level refers to their coven as the Illuminati, which means in Latin “the enlightened ones.”

That may or may not be true. Most likely Illuminati is simply a generic term. The name is not important. Nevertheless, the men at the pinnacle of power, whatever they call themselves, apparently do share a common trait: They are driven by a ruthless desire to have absolute mastery over all peoples and nations of the earth.

One secret society dedicated to the overthrow of the nation-state system, whose existence has been acknowledged by the United States and other governments intelligence agencies, has been defined by them as Synarchists International. Synarchism — so named as a synergy of Communism and Nazism. However, Synarchism itself springs from Martinism and Freemasonry; dating back to the French Revolution and Napoleon era.

In an article entitled What is a ‘Rohatyn’? EIR documents how a U.S. ambassador by the name of Anthony Biddle informed President Roosevelt in 1942 of the existence of secret clique in France, which controlled the Nazi-friendly Vichy government at the time. He went on to reveal to the President that the synarchist clique was an intermediary secret society controlled by the Banque of Worms and Lazard Freres of Paris.

Ambassador Biddle also shed some light on what he called the superior level of the secret society pyramid. He wrote:

“The superior secret societies are still more secret, if I may say so, than the intermediary secret societies. Neither their name, nor their existence, nor the names of their members are known.“In general, they contain only a small number of members, no more than one or two hundred, and sometimes less, but assembling in their hands either immense political powers, or immense capital. These secret societies are behind the intermediary secret societies. They organize them, inspire them, finance and direct them, often without the knowledge of the latter. There exists a set of converging proofs that lead one to think that at least two such superior secret societies are in existence today. The first one was formed in earlier times by a powerful group of representatives of the main ruling families of Europe, as well as the members of the high nobility….On the other hand, a second secret society of this type, which has been in existence for at least a quarter of a century, in Europe, unites a large portion of the industries in France, and in the United States, less in England. Proof of its activities has been found as early as 1924, and its existence is no longer deniable. It secretly directs the Synarchist Movement inside the biggest countries, and seemed to have been in very close contact with the European fascist governments which have emerged since 1922.”

The same invisible lines of power exist today that were behind the horrors of fascism and communism over half a century ago. Since then the controlling powers have spawned numerous intermediary semi-secret societies such as the Bilderbergers, the Council on Foreign Relations (CFR) and others, which are the visible power structures used to control political and business affairs. The CFR is the American counterpart to the British Royal Institute of International Affairs (Also known as Chatham House). Together these two institutions form the visible part of the intellectual foundation of a policy-shaping organ of the Anglo-American dyad.

The continuity of the conspiracy is no doubt because the same demonic principalities exist now as hundreds of years ago and are intent on perpetuating their scheme of empowering small cliques of men in order to manipulate the entire world according to their evil designs. The question is, will the satanically illuminated conspirators succeed in establishing their totalitarian New World Order?

According to no less an authority than Jehovah God, the One who sees from the beginning to the end, the answer is yes.

Fittingly, the now-dawning neo-Babylonian New World Order is typified in prophecy by Babylon itself. And the greatest irony is that the devilish scheme to tyrannize the world is actually sanctified by Jehovah himself.

In the opening verses of the 13th chapter of Isaiah Jehovah acquisitions Babylon’s army and sanctifies them as his own agency for expressing his anger upon all the nations. “I myself have issued the command to my sanctified ones. I have also called my mighty ones for expressing my anger, my eminently exultant ones. Listen! A crowd in the mountains, something like a numerous people! Listen! The uproar of kingdoms, of nations gathered together! Jehovah of armies is mustering the army of war. They are coming from the land far away, from the extremity of the heavens, Jehovah and the weapons of his denunciation, to wreck all the earth.”

A question thinking Bible Students ought to ask is if the Babylonian conquest of the ancient world, Judah included, has relevance for the judgment to come. Again, the answer is yes. Consider Isaiah 13:6-8, which reads: “Howl, you people, for the day of Jehovah is near! As a despoiling from the Almighty it will come. That is why all hands themselves will drop down, and the whole heart itself of mortal man will melt. And people have become disturbed. Convulsions and birth pains themselves grab hold; like a woman that is giving birth they have labor pains. They look at each other in amazement. Their faces are inflamed faces.”

The despoiling brought on by the king of Babylon coincides with the commencement of “the day of Jehovah” — foreshadowing the ultimate day of Jehovah at the conclusion of the system.

Numerous facets of the 13th and 14th chapter of Isaiah overlap certain features of the prophecy of Joel, which the apostle Peter specifically applied to the last days, describes a similar effect upon people as prophesied by Isaiah. For instance, Joel 2:6 states: “Because of it, [Jehovah’s onrushing military force] peoples will be in severe pains. As for all faces, they will certainly collect a glow of excitement.”

The New World Translation and most other modern versions do not use the term Lucifer at Isaiah 14:12 — using instead the term “shining one, son of the dawn.”

But what exactly is the meaning of the word Lucifer? 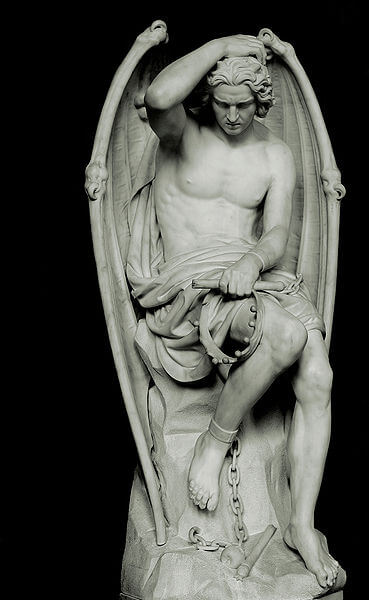 It is drawn from Latin meaning “light-bearer” or “enlightened one.” It has unfortunately been wrongly applied to Satan the Devil — as if his personal name. However, it is apparent by its usage in Isaiah that Jehovah applied the title to the king of Babylon.

What is most significant is that the shining one attempts to elevate himself over God. How is that possible? The context of the downfall of Lucifer explains: “O how you have fallen from heaven, you shining one, son of the dawn! How you have been cut down to the earth, you who were disabling the nations! As for you, you have said in your heart, ‘To the heavens I shall go up. Above the stars of God I shall lift up my throne, and I shall sit down upon the mountain of meeting, in the remotest parts of the north. I shall go up above the high places of the clouds; I shall make myself resemble the Most High.’ However, down to Sheol you will be brought, to the remotest parts of the pit”.

The shining one lifts himself above the stars of God by killing the anointed sons of the kingdom, who are to rule with Christ over a new world order. He makes himself resemble the Most High by establishing his own throne over the nations as a counterfeit world government, a new world order and attempts to simulate the morning-like dawning of the very Kingdom of God.

In view of the fact that there has been a long-running conspiracy to establish a world government and abolish all traces of Christianity; the evidence being well-established of the existence of a powerful occultic secret society of men who consider themselves to be the illuminated ones, for all who wish to know of such evils; the inevitable crisis soon to engulf the world must surely be the initial phase of the rise of Lucifer – or more correctly, the fall of Satan.

Perhaps the ultimate irony, though, is that Jehovah has his own secret society — that being the society of anointed ones. Paul described those in union with Christ as being illuminated with the sacred secrets hidden from the world and being secreted away in God; due to be revealed during the revelation of Christ, when the sons of God will also be revealed before all creation.

During the time of the end just ahead of us the sons of God will shine like the sun in the sky, in the full glory of Jehovah. Lucifer will prove to be a pale imitation in comparison to the true, illuminated sons of the dawn.