The Second Coming of Elijah

The Second Coming of Elijah

In Israel’s early history, people had the opportunity to see and hear about how God acted in Israel’s behalf. Jehovah miraculously delivered his people out of Egypt, and then king after king fell before them. Israel’s opponents refused to acknowledge that God was fighting for Israel, and that led to their defeat. Later, wicked King Ahab had every opportunity to see God’s hand in events. Ahab saw fire come down from heaven when Elijah prayed for his offering to be consumed. Elijah then indicated that Jehovah would bring the drought they were experiencing to an end, telling Ahab: “Go down so that the downpour may not detain you!” Ahab saw all of this happen but still refused to acknowledge that it was a mighty display of God’s power. This and other examples teach us an important lesson—we must recognize Jehovah’s hand when it is in action.

Have you seen the hand of God in action? The Watchtower is certainly implying that we have. The article from where the text was taken gives examples of how individuals prayed for guidance and then almost immediately one of Jehovah’s Witnesses knocks upon their door. It sort of happened to me that way, so no, I do not doubt that there are many such experiences. Nor do I doubt that God answers prayers —oftentimes in very dramatic ways.

I remember one experience related at an assembly years ago that was astounding. If my memory serves me, which it often doesn’t, it seems the experience took place in Poland. Anyway, a man was standing upon a railroad trestle trying to get up the courage to jump off and kill himself. At that very moment a train was coming down the track about to cross on the trestle where the distraught man was standing. The man muttered one last prayer. On the train one of Jehovah’s Witnesses was reading the Truth book and witnessing to a passenger sitting next to him. The passenger was so annoyed that he grabbed the little blue book and flung it out the window of the speeding train —whacking the man standing on the trestle in the head. Naturally, he picks the book up and starts reading and cancels his suicide. (Good thing the JW has not reading the large print Bible or the whack in the head may have been fatal.)

But, do these experiences, as wonderful and amazing as they are, reveal the hand of God the same way as was demonstrated when Elijah ordered the heavens to stop raining? Obviously not.

Jesus spoke of Elijah on several occasions. On one occasion Jesus pointed out the fact that Elijah did not minister to any widows in Israel —only to a Sidonian woman, a foreigner. He also explained to his apostles that “Elijah” had come in the form of his forerunner —John the Baptizer. The reason the scribes and disciples were interested in the identity of the prophetic Elijah is because the closing words of the Hebrew scriptures foretold the return of Elijah. The last verse of Malachi reads: “Remember the Law of my servant Moses, the regulations and judgments that I commanded at Horeb for all Israel to obey. Look! I am sending to you Elijah the prophet before the coming of the great and awe-inspiring day of Jehovah. And he will turn the hearts of fathers back toward sons, and the hearts of sons back toward fathers, so that I may not come and strike the earth, devoting it to destruction.”

Of the utmost importance —as regards Elijah’s prophetic significance —is that “Elijah” and “Moses” turned up on the mountain of the Transfiguration of Jesus Christ. And their appearance in the stunning vision witnessed by Peter, James and John is what prompted them to further inquire about Elijah, to which Jesus responded: “‘Elijah is indeed coming and will restore all things. However, I say to you that Elijah has already come, and they did not recognize him but did whatever they wanted with him. In this way also, the Son of man is going to suffer at their hands.’ Then the disciples perceived that he spoke to them about John the Baptist.”

On the one hand Jesus indicated that Elijah had already come, which the disciples perceived to be John. However, take note that Jesus also said “Elijah is indeed coming.” A second coming if you please. And obviously the coming of Elijah in the form of John the Baptist was not a precursor of the great and terrible day of Jehovah. It is this second coming of the prophet Elijah that should pique our interest.

The Watchtower is very much aware that there is a second coming of Elijah that precedes the return of Christ. However, Jehovah’s Witnesses have been led to believe that “Elijah” has already come. Not only did the Bible Students imagine that C.T. Russell was the great forerunner of Christ and the restorer of all things, but ever since then the Watchtower has portrayed all anointed Christians as an Elijah class. Here is what the December 15, 2005, (Page 29) Watchtower had to say:

In modern times, anointed Christians have done a work like that of Elijah. By word of mouth and by the printed page, they have warned people of all nations inside and outside of Christendom about the danger of false religion. As a result, millions have taken decisive action to end their membership in false religion. They have dedicated their lives to Jehovah and have become baptized disciples of Jesus Christ. Yes, they have heeded God’s urgent appeal respecting false religion: “Get out of her, my people, if you do not want to share with her in her sins, and if you do not want to receive part of her plagues.”

This is just an example of how the Watchtower has cleverly placed itself as the Kingdom of God, since all those who are to inherit salvation are gathered into the Christian Congregation of Jehovah’s Witnesses —so-called.

But the true significance of the appearance of Moses and Elijah in the Transfiguration is that it is a portent of the parousia. I have written a fair amount on this topic already, so there is no need to rehash it here, except to say that the two witnesses —who are also portrayed as Moses and Elijah —are identified as the two lamp stands and olive tress in Zechariah, regarding whom the angel explained:  “These are the two anointed ones who are standing alongside the Lord of the whole earth.”

The Lord of the whole earth is Jesus Christ. In what sense are the two anointed ones standing next to him? Perhaps to better appreciate the significance of that expression consider the word “parousia.” As Jehovah’s Witnesses well know the word translated as presence means being alongside. So the two anointed ones, typified by Moses and Elijah in the Transfiguration, which Peter said was a portent of the parousia, represent the chosen ones who will see Christ when he manifests himself alongside of them. They will then become witnesses of the parousia; hence, the two witnesses. And apparently they will be given miraculous powers, just as were Moses and Elijah originally. Their work will span the 42 month period, the length of time Elijah literally shut off the rain from the heavens.

YOU TOLERATE THAT WOMAN JEZEBEL

Interestingly, in his letter to Thyatira in Revelation Jesus criticized those who tolerated that wicked woman Jezebel, who calls herself a prophetess and misleads his slaves into idolatry. Jezebel, if you recall, was Elijah’s nemesis. She was the foremost promoter of baal worship among God’s people. But if we read Revelation correctly, which is to say, let him that has an ear hear what the spirit says to the congregation, Jezebel represents a leavening influence among Christ’s disciples prior to the second coming. 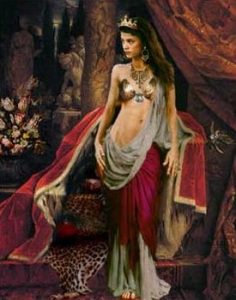 Jesus says that he gave her time to repent. (Please take note that Jesus did not command his disciples to “get out of her” in order to protect themselves from her evil influence, since that would involve leaving the congregation over which Christ presides.) But since the literal Jezebel was not repentant then and will not repent now, Jesus goes on to say: “Look! I am about to throw her into a sickbed, and those committing adultery with her into great tribulation, unless they repent of her deeds. And I will kill her children with deadly plague, so that all the congregations will know that I am the one who searches the innermost thoughts and hearts, and I will give to you individually according to your deeds.”

So, the execution of “Jezebel” is to occur in the tribulation. And it is so that all the congregations will know that Jesus is Lord. In other words, they will see the undeniable hand of God in action —or the hand of Christ, as the case may be.

Presently, Baal worship exists in the form of the idolization of the Watchtower. That is what the modern Jezebel promotes. Do not Jehovah’s Witnesses consider the organization to be their spiritual mother? Is that not akin to the Catholic deification of Mary, Jehovah’s mere slave girl? And just as Jesus said of Jezebel, that she calls herself a prophetess –so too, the Watchtower claims to be Jehovah’s prophetic mouthpiece.

The Phoenician princess, Jezebel, was likely the promoter of child sacrifice too. And like those ancient pagans Jehovah’s Witnesses have condoned the sacrifice of thousands of innocent young lives upon the Watchtower altar of pure worship by molly-coddling pedophile predators and concealing their crimes in order not to tarnish the gleaming image of the organizational idol.

And any who call attention to the Watchtower’s wicked deeds are persecuted and reviled as apostates and killed off judicially. To demonstrate that fact, over the past couple of weeks I have contacted a few thousand elders via email. Although most do not respond, a few have —only to accuse me of apostasy. Think of it, the masonic cult within the organization built a temple to Horus and deceived Jehovah’s Witnesses into worshipping within that evil eye. You would think JW’s would be disturbed by that sort of treachery. Apparently they are not though. Instead, it is those who expose the evil the Watchtower conceals who are condemned as apostates. Such is the influence of that woman, Jezebel, who in ancient times confused the Israelites into limping upon two opinions.

The coming of Elijah will bring about the restoration of truth and righteousness. And because the appearance of the two anointed witnesses will mean that the sons of God will have been revealed, all will be judged as to how they respond when they see Jehovah’s hand in action then.