Satan, the one misleading the world

Satan, the one misleading the world

How can we fight Satan and win? Jesus told his disciples: “By your endurance you will preserve your lives.” Nothing that any human can do will cause us permanent harm. Nobody can take away our precious friendship with God unless we allow that to happen. Even the death of Jehovah’s servants does not score a victory for Satan, for Jehovah will see to it that they are resurrected! On the other hand, Satan’s prospects are bleak indeed. After the destruction of his ungodly system, Satan will be abyssed for 1,000 years. At the end of Jesus’ Thousand Year Reign, Satan will be “released from his prison” for a short time to make a final attempt to mislead perfect mankind. After that, the Devil will be destroyed.  Satan faces certain doom, but that is not true of you! Take your stand against Satan, firm in the faith. You can fight Satan and win!

Most people have no idea that Satan even exists, much less that he exerts power and control over the world —even to the extent that Revelation states that Satan the Devil is misleading the entire inhabited earth. That’s a lot of people! And just think, it all began with a single lie. That is why Jesus said that the Devil is the “father of the lie.” No one had ever told a lie before —much less a lie impugning God’s character.

But now lies and liars are commonplace. Lies are what govern the world. Virtually everything is a lie. Most everything people believe to be true is a lie. Religions, all of them, are all based on lies. One of the most persistent lies is that of evolution. Men go to schools of great learning in order to be equipped to better explain the lies that people are required to believe.

Then there are the politicians and media. Their lies kill millions of people. Take Iraq for example. It was once a relatively peaceful and stable nation. There were no Jihadists —no terror. The strongman ruler kept order. Christians were left in peace. But the Anglo-American leaders at the time said that Saddam Hussein possessed weapons of mass destruction. Their intelligences agencies said it was an absolute certainty. Saddam posed a grave threat to the peace and security of the world. So, NATO invaded and lo and behold, not a shred of evidence has ever  been found to prove that there were ever any WMDs of any kind –not that they really expected to find any. 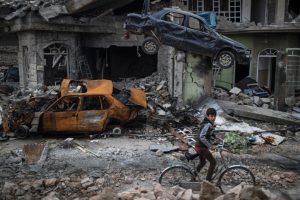 But as a result of the original lie over one million Iraqis have been killed and are still dying to this day and the nation lies in utter ruin. And of course, the same propaganda techniques have been deployed over and over again against targeted nations.

Now the big lie making the rounds is that Russia stole the last presidential election. Although the media present it as a proven fact, like the Iraqi WMD story, no evidence has ever been presented that proves Russia did anything. The fact is, the Anglo empire has targeted Russia for destruction. That is something the media do not mention. It is a lie by omission. But provoking a nuclear power like Russia is not the same as destroying a defenseless nation. It is the most dangerous and reckless thing, ever!

Surely, there is no reason to doubt what Revelation states as regards the fiery dragon giving the beastly political system its throne, power and great authority.

Ultimately, the demons are leading the world into a direct confrontation with Almighty God. Revelation reveals that expressions inspired by demons lead the kings of the world to a place called Armageddon.

But Jehovah’s Witnesses have their lies too. The truth is not pure unadulterated truth. The big lie, of course, is 1914 —the hoax that Christ began ruling the world then and that he came as a refiner and purified the Bible Students.

Paul explained that God allows Satan to empower a man of lawlessness who resides in the midst of the spiritual temple of God. Paul reveals that “the lawless one’s presence is by the operation of Satan with every powerful work and lying signs and wonders and every unrighteous deception for those who are perishing, as a retribution because they did not accept the love of the truth in order that they might be saved. That is why God lets a deluding influence mislead them so that they may come to believe the lie, in order that they all may be judged because they did not believe the truth but took pleasure in unrighteousness.”

As the context indicates, the lie has to do with the coming of Christ. Through written and verbal statements attributed to the apostles the deluding influence is intended to convince the faithful that the presence has begun and the day of Jehovah is here. It is undeniable that from the very first the Watchtower has announced that the presence has begun —originally in 1874.

In view of the fact that the world is ruled over by the father of the lie, and since his intention is to mislead those who belong to God and Christ, it should not be deemed incredible that Satan would put into operation powerful works and lying signs and wonders, such as orchestrating the First World War to coincide with the seven times chronology already in place. Since 1914 the Watchtower has interpreted events, such as the arrest of Rutherford and then the Cedar Point revivals, as the fulfillment of dozens of prophecies. “Every unrighteous deception,” indeed!

The most insidious lie is that Satan has no influence over the truth. Jehovah’s Witnesses have been deluded into believing that they dwell in spiritual paradise and the Devil has no place. They may have read the account many times before, but Jehovah’s Witnesses simply cannot comprehend the significance of the fact that men whom Paul dubbed the superfine apostles were presiding over the Corinthian congregation and yet Paul revealed that they were actually agents of Satan who were disguised as ministers of righteousness –just as the Devil himself continually transforms himself into an angel of light. Surely it is the work of the disguised angel of light, in that, Jehovah’s Witnesses imagine that they have been enlightened by a divine source to understand the esoteric secrets associated with Jesus’ invisible presence.

One of the most prominent aspects of the composite sign Jesus gave regarding his second coming is the prevalence of satanic deception. Jesus pointedly warned that there would be many false christs and false prophets who would arise and mislead many. Ultimately Satan’s agents will declare that Jesus is “here,” in the inner chambers, and “there,” out in the wilderness. Again, Jesus forewarned that the deception would be so convincing that if it were possible even the chosen ones would be misled.

As it stands, the Watchtower has proclaimed that the Lord’s day has been underway for over a century. Up until this very moment —even as the drums of war reverberate louder and louder —the Governing Body  continue to reassure Jehovah’s Witnesses there will not be another world war. In this they will surely be found out to be false prophets. There most certainly will be another world war and it will shatter the delusion that presently grips Jehovah’s Witnesses.