There is a saying that the first casualty of war is the truth. How true that is. Virtually every war in modern history has been ignited with so-called false flag operations and patriotic propaganda. Now with instantaneous communications and everyone in possession of a personal camera, it is possible to propagandize masses of people very quickly.

Thus, in the span of a few days the President of the United States went from saying that the President of Syria could stay, to ordering the cruise missile barrage of a Syrian military base and setting in motion a scheme to remove Assad from office. What caused this sudden reversal of policy?

Apparently, scenes of dead and dying children —victims of a poison gas attack. Of course, the cameras were rolling as the victims were taken to the hospitals and morgues.

With no investigation politicians in Europe and the US, along with their media minions, immediately blamed the president of Syria. How could there be any doubt? The missiles were flying a few hours later.

The hypocrisy of the media is nauseating, as just a few weeks earlier the US bombed the Iraqi city of Mosul, killing over 200 civilians, many of them being children. It was described as the worst civilian atrocity in a quarter of a century. It passed by with a shrug. 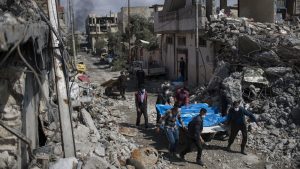 Aftermath of US attack on Mosul

But going back to the illegal attack on Iraq based on the phony reports that Saddam had weapons of mass destruction, the ongoing disaster the United States and NATO have set into motion in 2003 has resulted in over one-million deaths and tens of millions of displaced persons, many of whom have been radicalized by the atrocities and are now flooding into Europe.

Now, as if to up the ante, Russia is being investigated as to their possible involvement in the poison gas attack. Clearly, Russia has been the target all along. Or rather, the City of London is desperate to prevent any alliance of America, Russia and China, which is/was in the works. But why is Syria obviously targeted for destruction?

Apparently the geo-political strategists of the Anglo Empire have determined that in order to cripple the Iranian and Russian economies Europe must receive its oil and natural gas supplies from Qatar and Saudi Arabia, which requires pipelines to transverse Syria. You may be certain that the children of Syria do not factor into the equation, at all. Somehow, it is always about oil —the lifeblood of modern civilization, such as it is.

But there is another factor to consider. As Jehovah’s Witnesses well know, there are higher powers and authorities than mere humans. Jesus taught very plainly that the Devil, whom he referred to as “the wicked one,” is the ruler of the world. Jesus also declared that Satan is the original liar and murderer. The fact that the world is influenced by a master deceiver and mass killer certainly explains a lot.

However, there is, yet, another aspect to consider as to where we stand at this present moment in time. Though human history is one long, bloody tale of woe and sorrow due to the fact it is ruled over by a wicked god, the Devil’s rulership is not supreme, nor is it permanent. While men may suppose that they rule the chessboard by their own hand, humans are merely knights, bishops, rooks and pawns in a universal contest. The real movers are superhuman. And the God of gods —Jehovah God —has already demonstrated his mastery by revealing the outcome of the contest from long, long ago.

Jesus once sent out 70 of his disciples, who had only had a few months of training under his tutelage, with the message to declare that the Kingdom of the heavens had drawn near. Jesus empowered them to perform healing and expel the demons. When the disciples returned from their original missionary assignment and reported to their master that the demons had in fact been made subject to them, the account says that Jesus became overjoyed and exclaimed: “I see Satan already fallen like lightning from heaven. Look! I have given you the authority to trample underfoot serpents and scorpions, and over all the power of the enemy, and nothing at all will harm you. Nevertheless, do not rejoice because the spirits are made subject to you, but rejoice because your names have been written in the heavens.”

Jesus was not saying that Satan had been exiled from heaven at that time. We know that could not be the case since the book of the disclosure of the things that must shortly take place —Revelation, which was written long after Jesus had departed the earth —envisions the overthrow of Satan from heaven occurring as an immediate consequence of the coming to power of the Kingdom of Christ. What Jesus meant was, that because the disciples had been given authority over the demons, it was not only a demonstration of Jehovah’s power, but a guarantee that the little flock would ultimately attain the Kingdom the Father had promised and that Satan would be crushed under their feet in the future, as Paul indicated in the 16th chapter of Romans.

So, while we can only see and hear what takes place in the visible world, there is an unseen world that is at war. And the enmity between Christ and Satan goes nuclear, no doubt literally, when war breaks out in heaven and Michael and his angels overthrow the Devil and his angels. Satan’s ouster initiates a period of time known in the Scriptures as the time of the end, or the conclusion. During that short period of time the world over which Satan rules will be subjected to a catastrophe unlike anything that has ever occurred before or will ever occur again.

Although we cannot see Satan literally falling from heaven, we can see the effect his ouster will have on earth. The prophecy of Daniel foretells that in the time of the end the kings of the north and south will engage in a pushing and the king of the north will flood over all the nations. That symbolic flood brings the king of the south under subjection to the empire, effectively putting an end to democracy. Similarly, the eighth chapter of Daniel depicts a fierce looking king who keeps throwing truth to the earth (war propaganda) and who will ultimately bring to ruin the mighty ones of this world along with the prospective heirs of the Kingdom.

Contrary to the delusion propagated by the Watchtower, these earthshaking events are in our future. But it should not be supposed that it is the distant future.

Without taking the spiritual aspect into consideration, people naturally assume that rational minds will prevail. After all, even the most zealous war hawks have children and families. They surely know that provoking war with Russia and China will quickly escalate into a nuclear conflagration. Back during the Cold War the knowledge of mutually assured destruction, known as MAD, was the official policy that is credited with preventing the unthinkable from occurring. But human thinking fails to take into consideration that the maddened demons have no such constraints. They know they are facing oblivion. Ought they care if a few billion humans are destroyed in their rampage?

The fact that the frenzied pounding of the drums of war become louder with each passing day and men seem determined to provoke war on multiple fronts, and the looming, seemingly unavoidable confrontation, involves nations possessing the most powerful weapons ever devised, which, excluding the Hiroshima and Nagasaki atrocities, have never been used in warfare, we may not be too far off the mark to assume that Satan has already fallen like lightning from heaven.