Revelation – What Does it Mean?

Revelation – What Does it Mean?

The Watchtower has published an article on Revelation, posing the question: What Does it Mean?

The article does not discuss any aspect of Revelation. The Governing Body is implying that they know what it means, but do they really? It is true, as the brief article makes mention, Revelation uses many “signs,” or symbols, that are not to be understood literally, and much of the symbolism employed is drawn from other books of the Bible. However, as is typical of the Watchtower it is blatantly dishonest—claiming that “many of its prophecies are yet to be fulfilled.” While that is surely a true statement, it is not really what the Watchtower teaches. To be sure, according to Grand Climax publication, most of Revelation has already been fulfilled.

Naturally, the Governing Body wishes to downplay the fact that they have deluded Jehovah’s Witnesses into believing that most of the earth-shaking events portrayed in Revelation have already occurred. The Masters know it is better to speak in vague generalities than to call attention to specific prophecies that might cause the Learners to question the wisdom and sensibleness of the would-be interpreters of Revelation.

But details are important. Consider the eighth chapter of Revelation. The opening verse states: “When he opened the seventh seal, there was silence in heaven for about half an hour. And I saw the seven angels who stand before God, and seven trumpets were given to them.” 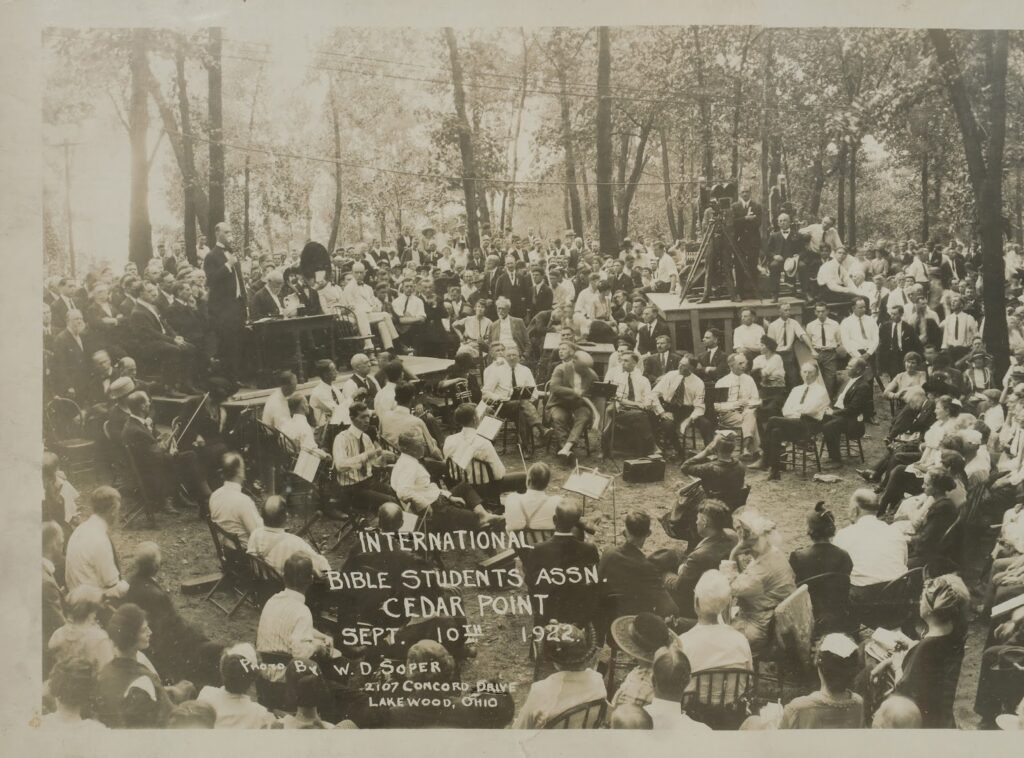 According to the Grand Climax commentary, the first angel blew his trumpet back in 1922. The occasion was a small gathering of Bible Students in Cedar Point Ohio, which is now known as the location of a rather large water park, which perhaps not coincidently boasts a watery dragon that appears to be menacing a kiddie sandcastle watch tower. Very strange and creepy. Check it out.

(I am not absolutely certain, but I think the Cedar Point amusement park is located on the same lakefront property where Rutherford held his series of conventions on the shore of Lake Erie, which makes Satan’s mockery all the more poignant.)

The Bible Students who attended the Cedar Point convention, who have all long since passed away, adopted a resolution declaring the following:

“We hold and declare that Messiah’s kingdom is the complete panacea for all the ills of humankind and will bring peace on earth and good will to men, the desire of all nations; that those who yield themselves willingly to his righteous reign now begun will be blessed with lasting peace, life, liberty and endless happiness.”

Okay, so? The Grand Climax continues:

Through resolutions, tracts, booklets, books, magazines, and discourses, this and later proclamations were trumpeted forth by means of the congregation of anointed Christians. The first trumpet blast resulted in Christendom’s being beaten as with the hardened water of a pounding hail. Her bloodguilt, due to her share in the wars of the 20th century, has been laid bare, and she has been shown to be deserving of the fiery expression of Jehovah’s wrath. The John class, with later support from the great crowd, has continued to echo the first trumpet blast, drawing attention to Jehovah’s view of Christendom, as being fit for destruction.

So, God put Christendom on notice a century ago? The question is, how many churchgoers are aware that they have been put on notice? For that matter, how many of Jehovah’s Witnesses are even aware that Jehovah’s mighty angel has sounded the judgment trumpet that caused symbolic fire, hail, and blood to be hurled to the earth?

The Grand Climax rightly calls attention to the similarity of the judgment of the first trumpet to the seventh plague upon Egypt, when Jehovah caused a literal hail storm mingled with fire to bring utter devastation, the likes of which had never been experienced before or since. In view of the fact that Jehovah’s judgment upon Egypt left an unforgettable impression upon the ancient world, which was talked about among the Canaanites even 40 years later, why is it that the end of the world judgments unveiled in the scroll of the Apocalypse are so easily ignored and utterly forgettable?

What about the second angelic trumpeter?

The second trumpet blast reveals that those of mankind who got involved in revolutionary conflicts over government rather than submit to God’s Kingdom are bloodguilty. Particularly Christendom’s “third of the sea” has become as blood. All living things therein are dead in God’s eyes. None of the radical organizations floating like boats in that third of the sea can avoid ultimate shipwreck. How happy we are that millions of sheeplike people have now heeded the trumpetlike call to separate from those who are still wallowing in the narrow nationalism and bloodguilt of that sea!

Jehovah’s angels issued Heaven’s fiery denunciation against the churches and nations almost a hundred years ago and nothing happens? It is business as usual. In contrast, when Moses announced Jehovah’s judgments to Pharaoh the plagues occurred immediately. Had Moses had to wait 100 years to see God carry out his word he and Pharaoh both would have been dead.

The Watchtower’s interpretation of Revelation is a total fraud. None of it has been fulfilled. The seals of Revelation have not been opened and neither have the seven angels blown their trumpets. And contrary to what the Masters state in the article, the message of Revelation is terrifying to those who claim to serve God—or, at least it should be. The reason that is so is because the sounding of the first four trumpets herald God’s judgments against His earthly organization.

These matters were originally published more than 15 years ago in Jehovah Himself Has Become King.