The Revelation of Christ Now at Hand!

The Revelation of Christ Now at Hand!

When the Israelites left Egypt, they did not do so as various independent groups, each group going its own way. And when Moses “stretched out his hand over the sea” and Jehovah split the sea apart, Moses did not go through alone or with just a few of the Israelites. Rather, with Jehovah’s protection, the entire congregation passed through.  They displayed a spirit of unity, and they were accompanied by “a vast mixed company,” non-Israelites who sided with them. It is unimaginable that a few individuals, perhaps a group of young ones, would have gone off on their own, taking a route that they viewed as preferable. Would it not have been senseless to do so and miss out on Jehovah’s protection?  The early Christians were also noted for working together.  This unity was especially evident during persecution, when they particularly needed one another.

Before the exodus from Egypt Jehovah brought a series of devastating plagues upon that great nation. There were plagues of gnats and frogs and swarms of devouring locusts. Pestilence and ulcers. There was a terrible hail storm that pulverized their trees and crops. There was a plague of deathly darkness that latest three days. Then the 10th plague —the execution of the firstborn in all of Egypt.

Jehovah’s judgment upon Egypt was so impactful and impressive when the Israelites approached the Promised Land after 40 years of wandering on the wilderness Rahab, the prostitute of Jericho, told the two spies that they had heard what Jehovah had done to Egypt. And they were terrified. 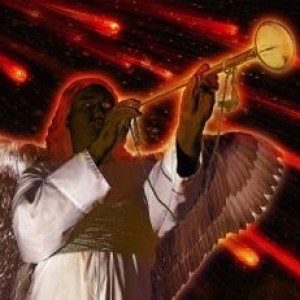 Now consider the book of Revelation. It reveals a similar pattern. After portraying the sealed 144,000 of the 12 tribes of “Israel” and the gathered great crowd, or “vast mixed company” if you prefer, standing before the throne, as if waiting for God to act, the seventh seal is opened. The unsealing of the final seal results in seven angels blowing their trumpets —heralding the immediately unfolding judgments of Jehovah God. “The first one blew his trumpet. And there was hail and fire mingled with blood, and it was hurled to the earth; and a third of the earth was burned up, and a third of the trees were burned up, and all the green vegetation was burned up.”

Anyone who believes the Bible to be the word of God will naturally wonder: When will these awesome judgments come to pass? Not so Jehovah’s Witnesses though. The reason being, it is all theocratic history. For example, here is what the Grand Climax publication says about the blowing of the first trumpet:

How is this judgment message delivered? Generally, not by the world’s news media, which are part of the world and often reproachful of God’s “slave.” It was proclaimed in a notable way at the second historic gathering of God’s people at Cedar Point, Ohio, September 10, 1922. These unanimously and enthusiastically adopted a resolution entitled “A Challenge to World Leaders.” In outspoken terms, it put the modern-day symbolic earth on notice, as follows…

First, there is no indication that the trumpet blasts of the angels that result in the execution of God’s judgments are somehow mere messages that are interpreted by humans and conveyed by speeches and pamphlets. That is the stuff of Watchtower folklore. Of course, all of the other angelic trumpet blasts have been similarly explained as having taken place back in the 1920’s when Judge Rutherford put Christendom and the world on notice. Except, who other than a few old timers among Jehovah’s Witnesses are even aware of such proclamations? Certainly  no one in the world is. How unlike the judgments God brought upon Egypt that left people in distant lands talking about it 40 years later!

The pouring out of the seven plagues have also been explained into nothingness. For example, here is what Revelation 16:2 states: “‘Go and pour out the seven bowls of the anger of God on the earth.’ The first one went off and poured out his bowl on the earth. And a hurtful and malignant ulcer afflicted the people who had the mark of the wild beast and who were worshipping its image.”

The contents of the first bowl harken back to the sixth plague, when Aaron threw dust into the air and lesions appeared upon the skin of the Egyptians. Here is the modern-day fulfillment according to the Watchtower:

The contents of this bowl strongly emphasize the choice that lies before humans. They must suffer either the world’s disapproval or Jehovah’s indignation. Mankind has been put under compulsion to accept the mark of the wild beast, with the intent that “nobody might be able to buy or sell except a person having the mark, the name of the wild beast or the number of its name.” But there is a price to pay for this! Jehovah regards those who accept the mark as being stricken with “a hurtful and malignant ulcer.” Since 1922 they have been marked in public as having rejected the living God. —Revelation Grand Climax

Although the title —Revelation – Its Grand Climax at Hand! suggests that the judgments of Revelation are yet to be revealed, the contents of the commentary are quite the opposite. Virtually everything has already occurred, at least that is the claim.

But that is not possible. Consider the fact that for the most part the prophecy of Revelation lays out the events to come in sequential order. As already stated, the sounding of the seven trumpets take place immediately after we are introduced to the gathered 144,000 and the vast crowd who are to survive the impending great tribulation. That means that the judgments of God are unveiled after the worldwide preaching is accomplished. But if the trumpets were sounded in the 1920’s that presents a problem since the great crowd had not even formed then. Nor had the calling and choosing of the 144,000 been concluded.

Whether of the little flock or of the great crowd, may you have the fullest share possible in publicizing the pouring out of the seven bowls of Jehovah’s anger, telling of God’s judgments on Satan’s world.

Furthermore, as has been pointed out in numerous articles on this site regarding the 666 marking, it is totally implausible that the bowls of God’s anger have been poured out already. Besides the fact that the Watchtower offers no hint of how people may have been prevented from buying or selling because they refused to recognize the authority of the long-forgotten League of Nations, not a single Jehovah’s Witnesses can coherently reconcile the fact that the mark of the beast means permanent death for those who receive it —yet, the Watchtower’s worldwide preaching extends the hope of salvation to virtually every soul on the planet. The question is: Why preach good news to a world of the doomed?

There are many, many incongruities that could be pointed out, but let one more suffice to make the point. Revelation 13:15 states that the beast will “cause to be killed all those who refuse to worship the image of the wild beast.” Since the United States senate refused to ratify the US’s entry into the League of Nations, thus refusing to worship the image according to the Watchtower’s interpretation, why were not all Americans killed off back during the 1920’s or any time since then? Were they merely symbolically killed, as the Watchtower’s two witnesses had been also?

Although it may hurt the feelings of Jehovah’s Witnesses to hear it, the Watchtower’s explanation, while clever and detailed, is simply nonsense.

The truth is, the Watchtower’s Revelation exegesis is intended to conceal Jehovah’s judgments – not reveal them. The opening of the seals of Revelation has not taken place. Therefore, nothing of the judgments of God have been carried out. But, we may expect the dramatic unveiling of Christ in the near future. And the blowing of the first trumpets will have an especially profound meaning for the Watchtower!