Psalms #27 – Jehovah is my light and my salvation

Psalms #27 – Jehovah is my light and my salvation

Mankind is enslaved by the fear of death and the Devil uses our fear of death to manipulate and coerce us. The recent Covid pandemic is an example. The authorities led the world to believe that the epidemic was much more lethal than it turned out to be. There was/is an agenda and we can only expect it to intensify.

There has been plenty of bad faith on the part of authorities—institutions that the public assumed were there to protect their health. Expert doctors and epidemiologists who spoke the truth were de-platformed and their livelihood was threatened. But now the truth comes out. Covid has the same lethality as the common flu. According to recently released figures people between 50-59 years of age have a survival rate of 99.871 percent. Survival rates increase among younger age groups. Children are more likely to be killed by an asteroid than Covid. The truth is, far more deaths have been wrought by the pharmaceuticals administered, including the vaccines.

Now we know, or at least we should, that there is a well-organized scheme in place to kill large numbers of people and destroy Western civilization. The Devil is not going to go quietly into the abyss. The political rulers under Satan’s control in the Western world, which is where the majority of Christians live, are stupidly

bent on destroying the life-support system based on fossil fuels, upon which we all depend. And world war three is now promoted by the Empire’s croaking propaganda machines as if it were a winnable sporting event. There is much to dread.

Knowing that the hand of God is involved is a source of strength. As Habakkuk declared in the closing words of his prophecy: “Although the fig tree may not blossom, and there may be no fruit on the vines; although the olive crop may fail, and the fields may produce no food; although the flock may disappear from the pen, and there may be no cattle in the stalls; yet, as for me, I will exult in Jehovah; I will be joyful in the God of my salvation.”

Still, the system goes on. But at some point, it will not continue to function in its present form. 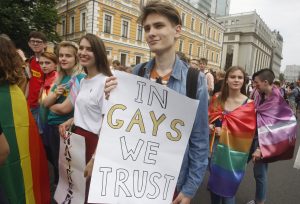 The promotion of gay and transgender lifestyles is aimed at the heart of Christianity. Genesis states it quite clearly and no one until recently would question the simple statement: “God made them male and female.” So, the glorification of all sorts of perversions, like the nonsensical gender fluidity, is an attack on the truth of God. But since he is out of range they are coming after us. No doubt at some point those confessing faith in Jehovah and Christ will be outlawed as homophobic and promoters of hate speech.

“When evil men attacked me to devour my flesh, my adversaries and my enemies were the ones who stumbled and fell. Though an army should set up camp against me, my heart will not fear. Though war should break out against me, even then I will remain confident.” — Psalms 27:3-4

War is coming. Of that, there is no doubt. And I am not referring merely to war between nations or civil wars. Obviously, those wars are coming too, but the real war is between Satan and Christ. All the way back in the Garden of Eden when Satan instigated a rebellion Jehovah decreed that there would be enmity between the serpent and his evil brood and the woman and her offspring. Not too long ago Jehovah wiped at an entire world with a great deluge. That flood drowned the demons’ many wives and sons. They want revenge. And when Christ comes it will be all-out warfare. Over the course of the past century and a half Jehovah has renewed the anointing, bringing into existence a group identified as the anointed offspring of the symbolic woman. When the Kingdom comes the debased serpent will go off to wage war against the remaining ones. We are confident that even though men may kill us they cannot prevent our instantaneous resurrection into the spirit realm.

“One thing I have asked from Jehovah—It is what I will look for—That I may dwell in the house of Jehovah all the days of my life, to gaze upon the pleasantness of Jehovah and to look with appreciation upon his temple.” (Vs 4)

When David composed the 27th Psalm there was no temple. The ark of the covenant was housed in a priest’s private home. Under inspiration, David speaks for the remaining ones. Their desire is to be with Jesus in the heavenly temple and to gaze upon the most beautiful Being for eternity. Jesus assured his anointed followers that he was going to prepare a place for them in his Father’s heavenly mansion and that he was going to return to the earth to take his spiritual family home.

“For he will hide me in his shelter on the day of calamity; He will conceal me in the secret place of his tent; high on a rock he will place me. Now my head is high above my enemies who surround me; I will offer sacrifices at his tent with joyful shouting; I will sing praises to Jehovah.” (Vs 5-6)

The day of calamity coincides with the coming of Christ. True, the Devil will wreak

havoc upon the world when he comes down in great anger knowing he has a short period of time, but it is initiated by Christ and on the day and hour that God has predetermined. So, the day of calamity is Jehovah’s day. What is the secret place that will serve as shelter for the faithful? No one can say. It’s a secret.

It is interesting that Elijah hid from his enemies in a cave and Jehovah miraculously provided food by means of ravens. The two witnesses of Revelation are said to have the authority to “shut up the sky so that no rain may fall during the days of their prophesying.” Elijah did that very thing—ordering a drought that lasted three and a half years—coinciding with the 1,260 days that the two witnesses prophesy.

We may expect the sealed chosen ones to give a joyful shout and sing Jehovah’s praise while pronouncing doom upon Satan’s world—much to the consternation of their many enemies.

“Hear me, O Jehovah, when I cry out; show me favor and answer me.  Speaking for you, my heart has said: “Seek to find my face.” Your face, O Jehovah, I will seek to find.  Do not hide your face from me. Do not turn your servant away in your anger. You are my helper; do not forsake me or leave me, my God of salvation.”

Jesus’ sacrificial death changed everything. Because Jesus sought to find Jehovah’s face even during his execution God has made Jesus the savior of those with faith. Jehovah will not hide His face from the brothers of Christ during their time of tribulation. In fact, they will see the glory of Jehovah in the face of Christ when he reveals himself to them. The manifestation of Christ will result in a grand salvation and lift them far above their earthly enemies and even the demons.

“Even if my own father and mother abandon me, Jehovah himself will take me in.  Instruct me in your way, O Jehovah, lead me in the path of uprightness because of my foes.  Do not hand me over to my adversaries, for false witnesses have risen up against me, and they threaten me with violence.” (10-12)

Jesus warned his disciples that during the conclusion brothers will hate a betray one another. Parents will hand their children over to death and vice-versa. Even the mother-like organization will become a betrayer and enemy of Jehovah’s sons. In fact, the treachery has already begun.

“Where would I be if I did not have faith that I would see Jehovah’s goodness in the land of the living?  Hope in Jehovah; be courageous and strong of heart. Yes, hope in Jehovah.”

A treacherous member of the Governing Body alluded to the passage above in a so-called Update, implying that in order to remain “in the land of the living” it would be necessary to receive regular injections of a dangerous and ineffective serum.

Our hope is that through Christ Jehovah will reveal the treacherous enemies within the Society and provide protection from all of Satan’s many minions when they move to exterminate Jehovah’s people. We have God’s promise that He will. People are going to melt in fear when Jehovah unleashes His military force. So, yes, be courageous and strong of heart. Yes, hope in Jehovah!