Psalms #20 – May Jehovah answer you in the day of distress

Psalms #20 – May Jehovah answer you in the day of distress

The Hebrew Scriptures do not have very much to say about Satan, but Jesus sure did. It was appropriate that the promised “seed” of the woman should shed light upon the enigmatic, talking serpent of Eden. The enmity about which Jehovah spoke in the garden of Eden burst out on the world’s stage when Jesus was baptized. Immediately after being anointed by God, the holy spirit led Jesus into the wilderness to be tempted by Satan. 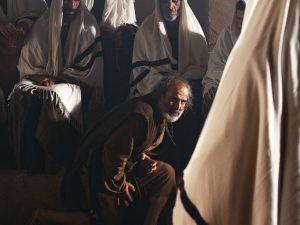 Then, when Jesus returned to Galilee he attended a meeting in a synagogue and was teaching his fellow Jews when he was confronted by a demon-possessed man who spoke and said: “What have we to do with you, Jesus the Nazarene? Did you come to destroy us? I know exactly who you are, the Holy One of God!” — Mark 1:24

In the wilderness the Devil pretended not to know who Jesus was and twice tempted him to prove his sonship by appealing to his ego, saying: “If you are a son of God…” But the demons apparently tried a different tactic, confronting Jesus with a display of ferocity and intimidation. The enmity was on full display right in the Jewish kingdom hall! 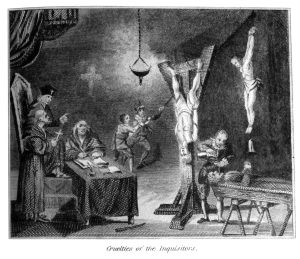 After the apostolic era, the enmity cooled for the simple reason that there were no sons of the Kingdom—or very few. Over the course of roughly 1,500 years, Satan solidified his hold on “Christianity.” Anyone who dared to defy the church was persecuted or killed. Even the Bible was locked away in a dying language.

But God’s spirit moved a few individuals, and learned men within the scholarly class began translating the Bible into the common languages of Europeans. Toward the close of the 14th century, the first complete English translation was produced by John Wycliffe. More than a century later William Tyndale produced an English translation in which the name of God was rendered as “Iehouah.” By 1530 when Tyndale’s translation was complete the printing press was available and over time the Bible began to be mass produced.

Finally, the king of England authorized a translation, and no doubt by divine providence the name of God appeared in four passages as “Jehovah”—a rendering that conforms better in the English language than Yahweh. Although in later revisions of the King James Authorized Version the name Jehovah was removed altogether, it was too late. The cat was already out of the bag, as the saying goes. The truth had already taken root.  Now millions of people call upon the name of Jehovah, as did Jesus.

Through the ongoing worldwide preaching campaign of Jehovah’s Witnesses, the name of God has been translated into hundreds of languages allowing people of faith to call upon the name of God.

Further, the worldwide work of Jehovah’s Witnesses has accomplished a two-fold purpose. Foremost, the Watchtower has served as a rallying post for those who have been called into the Kingdom, and secondly, it has established the biblically-based hope of surviving the end of this world.

However, unbeknownst to those who have heretofore served as slaves of Christ it is God’s purpose to allow a deluding influence to emanate from the same source. Paul referred to it as an operation of Satan accompanied by every powerful work of deception. Think 1914!

The stage is now set for the finale—for the beginning of the globe-engulfing time of distress, unlike anything that has ever occurred before or will ever occur again.

“May Jehovah answer you in the day of distress. May the name of the God of Jacob protect you. May he send you help from the holy place and sustain you from Zion.” — Psalms 20:1-2

What is the name of the God of Jacob? Jehovah’s Witnesses surely know. Satan’s scheme to erase God’s name from the Bible and replace Jehovah with Jesus may have deceived the vast majority of people who claim to be Christians but the Devil has utterly failed to remove God’s name from the hearts and tongues of a faithful few.

In the modern era, Jehovah has kept Himself in the background. That position will surely change when the day of distress comes upon the world—otherwise known as the day of Jehovah. Think back to the contest arranged by Elijah when

the prophets of Baal called upon their god and tried to conjure fire to consume their sacrifice. No answer. Then Elijah called on the name of Jehovah and a fireball fell from the skies like a nuclear blast.

Then there was Moses, who called on the name of Jehovah repeatedly to bring about the 10 plagues and part the Red Sea. Interestingly, Moses and Elijah are alluded to in the book of Revelation by the two witnesses. (Part of the delusion under which Jehovah’s Witnesses presently labor is the nonsensical notion that the two witnesses came on the scene back in 1918.)

Presently, we are living a relatively carefree life. But more and more people are feeling uneasy over the growing clouds of war, even the rising tide of civil war, food shortages, and the uncertainty of things nations in the developed world have always taken for granted; namely, energy to heat our homes and industries and power our machines. Behind all of the chaos, as if emerging from a thick shroud of fog, is the beast of tyranny that threatens to crush everything that is deemed to be essential to the continuance of civilization. When the distress fully envelopes the world then the holy ones will call upon the name of Jehovah. And he will respond.

“We will shout joyfully over your acts of salvation; we will lift our banners in the name of our God. May Jehovah fulfill all your requests. Now I do know that Jehovah saves his anointed one. He answers him from his holy heavens with great salvation by his right hand.” — Psalms 20:5-6

Contrary to the ardently held belief of Jehovah’s Witnesses, the Watchtower is not going to lead Jehovah’s throng into paradise. The parousia delusion will be utterly shattered, as pictured in prophecy as a highly raised, whitewashed wall that will be toppled as if by a torrential blast.

With the Watchtower disgraced and discredited and the flock scattered Jehovah alone will be held on high. So, a great humiliation must befall those who proudly boast of having restored pure worship.

God only provides salvation when all seems lost. Hence, David’s Psalm concludes: “Some rely on chariots and others on horses, but we call on the name of Jehovah our God. They have collapsed and fallen, but we have risen up and been restored. O Jehovah, save the king! He will answer us in the day we call for help.” — Psalms 20:8-9