Psalms #10 – The unfortunate ones fall into his clutches

Psalms #10 – The unfortunate ones fall into his clutches

The 10th Psalm opens with a question that has likely been voiced in various ways by many people for a long time: “Why, O Jehovah, do you stand at a distance? Why do you hide yourself in times of distress?”

There is no denying the fact that God allows evil to exist and prevail. The question, though, is why? Why does God hide, as it were?

It wasn’t that long ago. A few thousand years. In the beginning, there was only one man. God used to leisurely stroll through the Garden of Pleasure on a daily basis around the breezy part of the day and He would have a chat with Adam.

We do not know what they talked about. Perhaps Adam questioned Jehovah about how things work. I know I would have. How exactly do gnarly, crawling

caterpillars transform into delicate-winged butterflies? How does the yellow runny goop in an egg turn into a chick that pecks its way through the hard shell, and then in a few weeks it grows feathers and flies away? —that kind of stuff.

After a few years passed God made a woman and she became the man’s wife and mother of mankind. “At last!” Adam exclaimed. Life was great—for a few precious days anyway. You know the story about the serpent and the fruit tree of knowledge of good and bad. You know the expression, ‘I wasn’t born yesterday,’ which is understood to mean that a person is not naive. Well, in the case of Eve she really was born yesterday—literally. She was apparently just a few days or weeks old as an adult. She was very innocent and naive.

Anyway, after the love-stricken Adam unwisely accepted the forbidden fruit that Eve placed in his hand and took a bite, immediately his relationship with God changed. It was ruined. When God next came to visit Adam was not there, as he had been before. Jehovah kept calling: ‘Adam, where are you?’ No answer. Adam was “ghosting” Jehovah, as the saying goes. Perhaps Jehovah’s searching voice became more insistent.

Finally, a very frightened Adam came out of the shrubbery and answered. He had been hiding from God because he realized he was naked. Oh, dear. Now he is standing there naked, as if he had not been bare naked all along. So, God responded with two questions: “Who told you that you were naked? Have you eaten from the tree from which I commanded you not to eat?”

The entire course of history might have turned out differently had Adam been honest and upfront with his Creator and former friend. Obviously, God knew what Adam had done but God lets us explain ourselves. Who knows if the tender-hearted Jehovah would have forgiven Adam’s trespass had he manned up and confessed and expressed his deep regret and implored his Father for mercy?

Tragically, though, Adam deflected blame not only on his naive bride but on Jehovah: ‘It was the woman whom you gave me…’ So, it was God’s fault for giving the lovely, irresistible temptress to Adam. How pathetic! Maybe God should have given Adam his rib back as punishment?

With Adam as the human father of us all, it is no wonder that everyone tends to hide from God in various ways and blame him for all the troubles in the world. But just remember, it was the man who hid from God first.

Except, God is not really hiding. He is waiting—patiently. There is to be an unveiling. And it will not be a stroll in the garden either. It is not easy for God to stand at a distance and watch all the horrible things that are going on and do nothing. Through Isaiah God explains: “I have kept quiet for a long time. I remained silent and restrained myself. Like a woman giving birth, I will groan, pant, and gasp all at once.” — Isaiah 42:14

Do we really want to experience the explosion of God’s pent-up anger? It is not an option. At this late date, it is unavoidable. There will be no place to hide. The verse preceding ought to give us a chill. When God breaks His silence the scripture says: “Jehovah will go out like a mighty man. He will awaken his zeal like a warrior. He will shout, yes, he will let out a war cry; He will show himself mightier than his enemies.”

David continues: “For the wicked one boasts about his selfish desires and blesses the greedy one; He disrespects Jehovah. In his haughtiness, the wicked man makes no investigation; all his thoughts are: “There is no God.” His ways keep prospering, but your judgments are beyond his understanding; he scoffs at all his adversaries. He says in his heart: “I will never be shaken; for generation after generation I will never see calamity.”

The Psalm pretty much explains everything about the world today. Wicked people rise to the top of society. If you are a good liar and have no problem crushing people or having them eliminated you will succeed. Unless, of course, someone more ruthless and wicked have you taken out. Virtually every institution has become corrupt. The superior authorities that God instituted as His ministers have become weaponized by Satan. Greed is king. The money men profit from the misery of the poor. That’s how the system works now. Europeans are being told they have to take fewer showers and eat less in order to punish Putin. Some will have to choose between not eating or freezing this winter. Some choice. You may be certain that the wicked rulers who are imposing this fate on millions will neither be starving nor freezing on their yachts and in their Mediterranean villas.

In the USA the top medical man in the government funneled millions of dollars of taxpayer money to fund gain-of-function research to make pathogens more pathogenic. And he is honored as a great man of science whose integrity is above reproach. In reality, he has presided over mass murder and his masters are very pleased with his work so far. 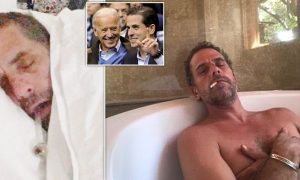 Or take the president of the United States. His son peddles his father’s influence to criminals the world over. He receives millions of dollars for his services. He has sex with children and cavorts with tattooed prostitutes and smokes crack and it is all on the Internet for the world to see. There is no accountability. Far from it. The law enforcement agencies have become so corrupt they protect criminals and persecute the political rivals of the established syndicate. The world is their oyster, as the saying goes and the pearls are theirs for the taking. What’s that big, bad god in the sky going to do about it?

“His mouth is full of curses, lies, and threats; under his tongue are trouble and injury. He waits in ambush near the settlements; from his hiding place he kills an innocent one. His eyes are watching for an unfortunate victim.”

Vladimir Putin said it best when he referred to the Anglo empire as the “empire of lies.” It truly is. There is no truth. Truth is being outlawed. It is as the prophet Daniel foretold: ‘He keeps throwing truth to the earth.’ The empire of lies threatens any nation with war and sanctions if they do not submit. It destroys nations with bombs, coups, and financial warfare.

President Obama used to have a weekly meeting with his hit men and he would personally designate who was going to be killed by a drone strike. He was awarded the Nobel peace prize. 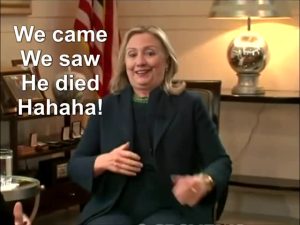 His secretary of state, Hillary Clinton, bragged about murdering the president of Libya because he dared to defy the empire of lies. She then subjected the entire nation to a never-ending lie regarding her political rival being a traitor and conspiring with Russia. On and on it goes. The wicked keep prospering.

Now, the IRS is being ramped up like a quasi-military force. The collection agency for the British Empire’s Federal Reserve has more bullets in stock than an army and now 87,000 shock troops are being recruited and trained to go to war against citizens who fail to pay the empire of lies. One recruitment ad informs potential applicants that they must be willing to shoot to kill. It really is coming down to ‘your money or your life.’ We are all going to become unfortunate victims as the mass-murdering machine gains steam. Indeed, why does Jehovah stand at a distance?

“He waits in his hiding place like a lion in its lair.

He waits to seize the helpless one.

He seizes the helpless one when he pulls his net shut.

The victim is crushed and brought down;

The unfortunate ones fall into his clutches.

He says in his heart: “God has forgotten.

He has turned away his face.

Let’s be honest. As bad as things are, they can get a whole lot worse. If we assess the overall general state of the Western world in recent decades, in spite of all the evils being perpetrated we still have had it pretty good. True, the empire of lies has destroyed a few nations and killed a few million unfortunate souls, it has unleashed a virus and imposed a potentially deadly cure, flooded the country with narcotics and aliens, destroyed the industrial base of the nation, and bankrupted the treasury; but you would never know it. In America, people are still partying like it is 1999, as a certain deceased JW celebrity once sang.

The pandemic notwithstanding, the present generation has never experienced any real hardship or oppression. People are upset because of the increase in the price of gasoline and meat. Some people are traumatized because someone called “them” by the wrong personal pronoun. Tragic.

To the point: the world as a whole has not fallen into his clutches yet. And that is why God has not intervened. When it all comes crashing down and the murder machine gets shifted into high gear then people of faith are going to call out to Jehovah in anguish. And lo and behold, Jehovah will listen attentively to them! The meek and lowly will have the power to call down the God of heaven. And He will come! David’s song concludes:

“But you do see trouble and distress.

You look on and take matters in hand.

To you the unfortunate victim turns;

You are the helper for the fatherless child.

Break the arm of the wicked and evil man,

So that when you search for his wickedness,

You will find it no more.

Jehovah is King forever and ever.

The nations have perished from the earth.

But you will hear the request of the meek, O Jehovah.

You will make their hearts firm and pay close attention to them.

You will render justice to the fatherless and to those who are crushed, so that mortal man of the earth may no longer make them afraid.”