No one knows the day or hour – but of what?

No one knows the day or hour – but of what?

QUESTION: At Mark 13:32 Jesus said: “Concerning that day or hour nobody knows, neither the angels nor the Son…” Is Jesus talking about his presence, which Jehovah’s Witnesses believe began in 1914, or is he talking about Armageddon?

ANSWER: The simple answer is, Jesus was referring to the day and hour for the beginning of the conclusion and ultimately his presence among the chosen ones —not the world-ending war of Armageddon. The context makes that evident.

In consideration of the context, Jesus said in full: “Concerning that day or the hour nobody knows, neither the angels in heaven nor the Son, but the Father. Keep looking, keep awake, for you do not know when the appointed time is. It is like a man traveling abroad who left his house and gave the authority to his slaves, to each one his work, and commanded the doorkeeper to keep on the watch. Keep on the watch, therefore, for you do not know when the master of the house is coming, whether late in the day or at midnight or at dawn or early in the morning, in order that when he comes suddenly, he does not find you sleeping. But what I say to you, I say to all: Keep on the watch.”

Consider the illustration Jesus related. He is obviously the “man traveling abroad who left his house.”

As we know 40 days after his resurrection from the dead Jesus returned to his Father in heaven; hence, he traveled as if to a distant land. But before he ascended he gave authority over his “house” to his slaves. ‘Feed my little sheep’ he thrice commanded Peter. Obviously, though, those original disciples have all passed away. But by extension those whom Jehovah anoints and who are brought into the master’s house, that is to say into the congregation of the Firstborn, are also given authority over the master’s “house” in his absence.

As Jesus stated on many occasions, he is returning. And what is the purpose of his coming back? Primarily it is to bring to himself all those who have been called into the heavenly Kingdom. Secondarily, it is to commence the re-creation.

First Jesus will gather to himself all those who have died in union with him. Paul explains: “For this is what we tell you by Jehovah’s word, that we the living who survive to the presence of the Lord will in no way precede those who have fallen asleep in death; because the Lord himself will descend from heaven with a commanding call, with an archangel’s voice and with God’s trumpet, and those who are dead in union with Christ will rise first.”

But Paul went onto explain that afterwards the living holy ones will also be gathered to him; obviously via the resurrection too. Although the living who survive to the presence do not sleep in death as do those who die prior to the parousia. But to emphasize the point, Paul writes: “Afterward we the living who are surviving will, together with them, be caught away in clouds to meet the Lord in the air; and thus we will always be with the Lord.”

Now, returning to the 13th chapter of Mark, a few verses before Jesus’ statement regarding no one knowing the day or hour, Jesus said the following: “And then they will see the Son of man coming in the clouds with great power and glory. And then he will send out the angels and will gather his chosen ones together from the four winds, from earth’s extremity to heaven’s extremity.”

The gathering of the chosen ones is in reference to their being resurrected to be with the Lord. And most significantly, this means that there will be no chosen ones on earth when the war of Armageddon commences. 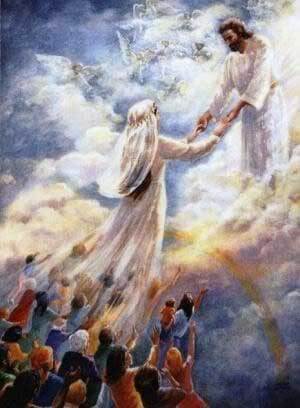 That is also apparent from a consideration of Revelation, specifically the 19th chapter. There the gathering together of all of the holy ones is symbolized by the “marriage of the Lamb.” Also the occasion is referred to as the Lamb’s wedding evening meal. Revelation 19:9 states: “Write: Happy are those invited to the evening meal of the Lamb’s marriage.”

That heavenly “evening meal” ought to remind us of the first evening meal —the sacred ceremony Jesus established on the night of his arrest, when he was then sacrificed as an unblemished lamb. It was on that occasion that Jesus passed the loaf and the cup, and he also made a covenant with his disciples for them to rule with him in his Kingdom. So, “the evening meal of the Lamb’s marriage” signifies the completion of the calling and choosing —when all of the holy ones are, at last, gathered to the Lord. That will be a most joyous occasion.

But now, notice the sequence of events. After the marriage feast Revelation depicts Christ and his heavenly cavalry charging forth to annihilate the armies on earth arrayed against God. That is the war of the great day of God the Almighty at the place called Armageddon.

But as to the original question: Since none of the holy ones will be on earth when the nations are destroyed the unknown day and hour of the master’s coming could not possibly be in reference to Armageddon, since all the master’s slaves will be with him then.

Where does that leave Jehovah’s Witnesses?

Well, they are in a mess. The Watchtower has made an absolute mess of things. Consider, again the passage under consideration from the 13th chapter of Mark. The illustration of the coming of the master to his own house to judge his slaves as to their faithfulness and wakefulness clearly relates to what is known as the judgment of the house of God.

In proof of that consider Jesus’ letters to the seven congregations in the opening pages of Revelation, specifically to the congregation in Sardis in the third chapter, where Jesus states: “Become watchful, and strengthen the things remaining that were ready to die, for I have not found your works fully performed before my God. Therefore, continue mindful of how you have received and how you heard, and go on keeping it, and repent. Certainly unless you wake up, I will come as a thief, and you will not know at all at what hour I will come upon you.”

Jesus’ stern admonition to repent and become watchful harmonizes with the illustration in the 13th chapter of Mark. It confirms that the unknowable hour of Jesus’ thief-like coming is in regards to his slaves.

Also, consider more closely what Jesus stated in Mark. He referred not merely to his coming, but he said: “when he comes suddenly.” Now consider a similar expression in the third chapter of the prophecy of Malachi, where it states: “Look! I am sending my messenger, and he will clear up a way before me. And suddenly the true Lord, whom you are seeking, will come to his temple; and the messenger of the covenant will come, in whom you take delight. Look! He will certainly come,’ says Jehovah of armies. ‘But who will endure the day of his coming, and who will be able to stand when he appears?’”

Notice the word “come” appears three times in that brief span. And the word “coming” is used once as well. But, take special notice that the true Lord does not just come —he comes “suddenly,” just as Jesus stated in Mark. Obviously, the temple to which Jesus suddenly comes is the same as the “house” to which the long-absent master suddenly comes.

However, the Watchtower doesn’t see it that way. According to Bethel the true Lord came to his temple in 1914. Here is what is stated in in the July 15, 2013, Watchtower:

What is the larger fulfillment of Malachi’s prophecy? For many years before 1914, C. T. Russell and the brothers working with him did a work like that of John the Baptizer. They studied the Bible to discover what it really teaches. For example, they taught the true meaning of Christ’s ransom sacrifice, showed that hellfire did not exist, and declared when the Gentile Times would end. There were many other religious groups who claimed to be Christ’s followers. But who among these groups were the wheat? To answer that question, Jesus began to inspect the spiritual temple in 1914. Jesus’ work to inspect and cleanse that temple lasted from 1914 to the early part of 1919.

Contradictorily, although claiming that the master has already come to inspect God’s temple, the Watchtower now teaches that the coming of the master to judge the slaves of his household is in the future. But, supposedly, his future coming is not the parousia. It is Armageddon! What a tangled mess!

The Watchtower vividly demonstrates that they have no hint as to the day or hour of his coming. And their blindness virtually guarantees that Jesus will come upon them as suddenly and unexpectedly as a thief in the night. 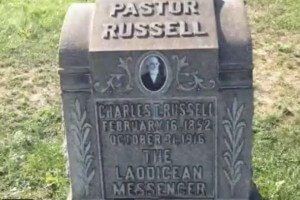 Of course, it was C.T. Russell who originally concocted the myth that the Lord’s powerful presence began in 1874 and 1914 was to be the end of it all. Then, in 1930 Rutherford reset the beginning of the parousia to 1914. The Watchtower has been shackled to that date ever since.

The current Governing Body and apparently everyone else at Bethel are completely blind to the many contradictions they espouse. Ironically, now the message Jesus directed to that Laodicean congregation is most appropriate for the congregants of Bethel. Let them hear what the spirit now says to the congregation: 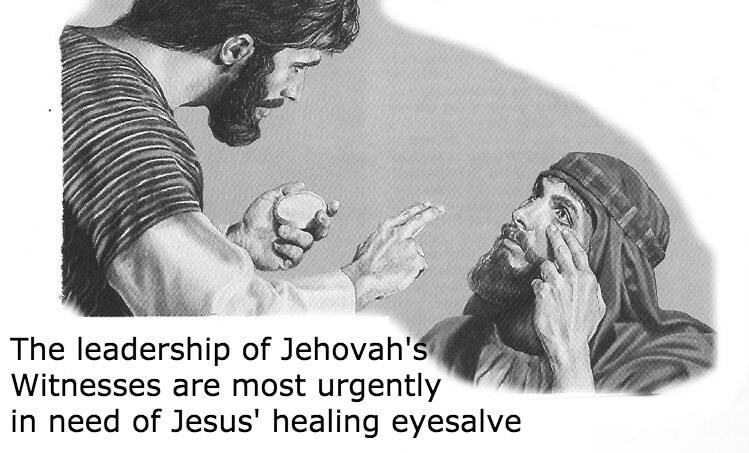