Moving Ahead with Jehovah’s Organization

Moving Ahead with Jehovah’s Organization

One thing I have asked from Jehovah—it is what I will look for—that I may dwell in the house of Jehovah all the days of my life.—Ps. 27:4.

As part of Jehovah’s organization, what joy we now have in telling others about God’s promised new world!  “The meek will possess the earth,” says Psalm 37:11, “and they will find exquisite delight in the abundance of peace.” People “will build houses and live in them” and will enjoy “the work of their hands.” There will be no more oppression, poverty, and hunger. Babylon the Great will no longer deceive anyone, for she will not exist.  The dead will be resurrected and given the opportunity to live forever. What thrilling prospects exist for millions who have made a dedication to Jehovah! For such promises to become realities for us as individuals, we must continue to make spiritual progress, moving ahead with God’s organization, always keeping pace with it.

Israel was once Jehovah’s earthly organization. But when the Messiah came Israel had fulfilled its purpose, or nearly so. Ultimately, Christ set up a new organization and Israel was gradually phased out and Jerusalem —the center of worship in those days —was eventually, completely destroyed.

Contrary to what was undoubtedly the prevailing opinion among the Jews then —that their leaders would guide them aright —the self-exalting religious leaders did not accept Jesus as the Messiah. Far from it. Instead of leading the people to Christ, the Pharisees, Sadducees, scribes and priests, were his most ardent enemies. Although some among their number believed, most were afraid to publicly acknowledge Jesus for fear of losing their positions in Jewish society. As the gospel relates: ‘They loved the glory of men more than the glory of God.’

But Jesus’ ministry was so far-reaching, his presence so impactful, his teaching so masterful, the common people —at least those who loved God —could not help but be drawn to him. Those who accepted Jesus as the One sent by God allowed him to be their Lord and teacher. Soon, Jesus had them sufficiently trained and he sent them out to preach about the Kingdom. First he sent out the Twelve. Then he commissioned 70 in pairs, to go through the land of Israel, village to village.

As Jesus was departing this world he gave them a grand assignment to go to the ends of the earth teaching others about the Kingdom. His parting words were: “Look! I am with you all the days until the conclusion of the system of things.”

In Jesus’ absence Christianity was absorbed into the decadent Roman Empire —replacing Mithras as the state religion. And the Lord’s command to preach the Kingdom was nullified, made illegal —punishable by death.

But toward the end of the 19th century suddenly another evangelical work was undertaken by the so-called International Bible Students. In many respects they demonstrated the same zealous spirit as those whom Jesus sent out originally —going from town-to-town, farm-to-farm, house to house, with the message. Jesus was obviously with them, as he said he would be. The Watchtower Society was, of course, instrumental in training, equipping and directing the Bible Students then and Jehovah’s Witnesses now.

But Jesus’ illustration of the master who traveled to a distant land to secure kingly power for himself left open the possibility that Jesus might return during the lifespan of the apostles; hence, a rumor spread from the apostles and persisted through the first century that John would be alive when Jesus returned. It was not until the apostle wrote the closing words of his gospel toward the end of his life that the rumor was finally dispelled.

The parallel is that the Bible Students and Jehovah’s Witnesses have also “thought that the Kingdom was going to appear instantly,” or during the 1914 generation. Thus, “moving ahead with God’s organization” has had its challenges.

Returning to the parting words of Jesus and his being with his disciples until the conclusion of the system raises an important question Jehovah’s Witnesses would do well to consider, and it is this: Since Jesus is with his true disciples prior to the conclusion, how does that relationship change during the conclusion?

The reason that question is relevant is because Jehovah’s Witnesses believe that the conclusion of the system began in 1914, and yet there is no observable difference in the relationship between Jesus and his followers since 1914.

Obviously the preaching and teaching work that Jesus began while he was on earth was carried on in his absence during the first century, so we should not suppose that the worldwide work the Watchtower sponsors now can only be accomplished during the conclusion. 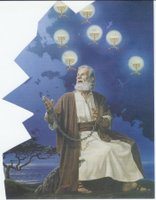 There is another interesting parallel. As the last surviving apostle, John found himself in exile on the penal island of Patmos. It was there that the aged apostle received the Revelation directly from Jesus Christ. We might think of Revelation as simply the last book in the Bible, but it is much more than that —as Jesus stated, it is a revelation of the things that must shortly take place. (For a consideration of the Watchtower’s Grand Climax commentary on Revelation see the archived blog)

John did not merely receive dictation and write down the things he was told. He enacted with Jesus in the visions that gripped him. He saw Jesus in vision and Christ spoke with him and touched him. John described his encounter with the glorious Lord in the opening chapter of Revelation.

“I turned to see who was speaking with me, and when I turned, I saw seven golden lampstands, and in the midst of the lampstands someone like a son of man, clothed in a garment that reached down to the feet and wearing a golden sash around his chest. Moreover, his head and his hair were white as white wool, as snow, and his eyes were like a fiery flame, and his feet were like fine copper when glowing in a furnace, and his voice was like the sound of many waters. And he had in his right hand seven stars, and out of his mouth a sharp, long, two-edged sword was protruding, and his countenance was like the sun when it shines at its brightest. When I saw him, I fell as dead at his feet.”

Many years before John had a similar experience on the Mount of transfiguration, when Jesus’ countenance shone like the sun and a great fear fell over the three apostles.

That Jesus appeared to John in the midst of the seven lampstands is significant. The seven golden lampstands represent the seven congregations. And the fact that Jesus appeared to a representative member of those congregations while in the midst of the lampstands signifies that Jesus will appear to his chosen ones during the apocalypse. And the fact that John experienced this fore gleam of the parousia toward the close of the apostolic era is a portent too, indicating that the conclusion and the parousia take place after the preaching work is finished.

Just as Israel fulfilled its purpose when Christ came, so too, the Watchtower will have accomplished God’s purpose in connection with it when Christ arrives. Then, moving ahead and keeping pace will take place apart from what is commonly thought to be Jehovah’s organization presently.