Moving Ahead With Jehovah’s Organization – Until When?

Moving Ahead With Jehovah’s Organization – Until When?

Preaching the good news contributes to the sanctification of Jehovah’s holy name. And it surely is an inestimable privilege to be entrusted with “the glorious good news of the happy God.” God wants us to maintain good spiritual health by sticking to him and supporting his organization in its various activities. Moses told the Israelites: “I take the heavens and the earth as witnesses against you today that I have put life and death before you, the blessing and the curse; and you must choose life so that you may live, you and your descendants, by loving Jehovah your God, by listening to his voice, and by sticking to him, for he is your life and by him you will endure a long time in the land that Jehovah swore to give to your forefathers, Abraham, Isaac, and Jacob.”  Our life depends on doing Jehovah’s will, loving him, obediently listening to his voice, and sticking to him.

The Watchtower article upon which the day’s text is based is entitled Are You Moving Ahead With Jehovah’s Organization? (This article is discussed in detail in Watchtower Review)

The article states that the organization is successful because it has Jehovah’s approval. And the assumption is that it always will. To prove their point they cite the prophecy of Ezekiel concerning the attack upon “Israel” by Gog and his hordes and Jehovah’s crushing response.

The issue, though, is not whether the Watchtower is Jehovah’s organization. I, for one, believe that it is. The question is: Will it continue to be going forward? 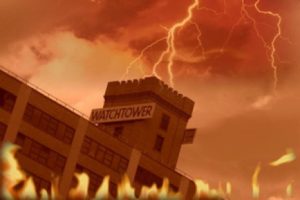 The suggestion that the Watchtower will not always serve as the governing and guiding agency for Jehovah’s Witnesses is not a new concept to longtime readers of this site. One of the first articles that appeared on e-watchman in 2002 was entitled The Coming Collapse of the Watchtower. Check it out on the Wayback Machine. (Now a chapter in Jehovah Himself Has Become King)

It is not that I am so insightful. The problem is that Jehovah’s Witnesses are so very blind. And I do not mean merely the lowly publishers. It is a top-down condition —imposed upon all from Bethel. Allow me to walk you through the obvious error the Watchtower embraces as exhibited in the Moving Forward piece. Consider this condensed quote taken from the opening paragraphs of the article:

The new organization, so highly favored by God, survived the destruction of Jerusalem in 70 C.E. Those first-century events were a precursor of developments involving Jehovah’s present-day servants. Satan’s system of things will soon come to its end, but God’s organization will survive the last days. How can we be sure about this? What did Jesus say about the “great tribulation,” and how will it start? Regarding his invisible presence and the conclusion of the system of things, Jesus said: “There will be great tribulation such as has not occurred since the world’s beginning until now, no, nor will occur again.” This unparalleled tribulation will start when Jehovah brings destruction on “Babylon the Great,” the world empire of false religion, by using the political powers.”

If you read the entire article the Watchtower points out numerous features of the law that God gave the Israelites that foreshadow aspects of the modern organization. For example, in paragraph 11 the annual festivals are compared to assemblies and conventions sponsored by the Watchtower. The question for thinking Jehovah’s Witnesses to consider is this: Since there is an obvious parallel by what method of reasoning does Jerusalem of old come to represent Babylon the Great, the world empire of false religion? The reason that question is pertinent is because on the one hand the Watchtower recognizes that Israel and their temple-centered worship served as Jehovah’s earthly organization then, but on the other hand they assert that the holy place that Jesus said would be desolated by a disgusting things represents the entire system of false religion.

There is only one reason for that wholly unreasonable, unscriptural leap of logic. It is because everything the Watchtower teaches as regards prophecy places all of God’s judgments against Christianity into the past —the past in this case being 1914-1919. That is why Bethel has developed a rather elaborate mythology around the events associated with J.F. Rutherford’s brief imprisonment and his subsequent release from Babylon the Great.

The Watchtower’s fallacy becomes more recognizable when we consider the facts. According to the WT the “Jerusalem” that Jesus foretold would be brought to desolation during the tribulation represents apostate Christendom and even Babylon the Great because the religion of the Jews in Jesus’ day had become apostate. But was it? Did Jesus advise his followers to ‘get out of her,’ to abandon Judaism? Not at all. In fact, Jesus used the Jewish form of religion as the basis for his own teachings. To illustrate the point, in his Sermon of the Mount Jesus taught that if your brother has a grievance with you then leave your gift at the altar and go make peace with your brother. Then come back to the temple to offer up your gift. Obviously, Christ had in mind offering gifts at the temple.

Furthermore, although the institution of the Pharisees was not something that was part of the original organization, but came into existence after the Jews returned from Babylon, nonetheless, Jesus commanded his followers to obey the Pharisees, just not imitating their hypocrisy.

The Watchtower implies that once Christianity was established that the Christianized Jews abandoned Judaism. That is simply not true. Here is a sampling of scriptures from the book of Acts that prove otherwise:

And day after day they were in constant attendance at the temple with one accord… —Acts 2:46

Now Peter and John were going up into the temple for the hour of prayer, the ninth hour… — Acts 3:1

But during the night Jehovah’s angel opened the doors of the prison, brought them out and said: ‘Be on your way, and, having taken a stand in the temple, keep on speaking to the people all the sayings about this life.’ After hearing this, they entered into the temple at daybreak and began to teach. — Acts 5:19-21

But a certain man arrived and reported to them: ‘Look! The men you put in the prison are in the temple, standing and teaching the people.’  —Acts 5:25

And every day in the temple and from house to house they continued without letup teaching and declaring the good news about the Christ, Jesus. —Acts 5:42

Then Paul took the men along the next day and cleansed himself ceremonially with them and went into the temple, to give notice of the days to be fulfilled for the ceremonial cleansing, until the offering should be presented for each one of them… —Acts 21:26

“But when I had returned to Jerusalem and was praying in the temple, I fell into a trance and saw him saying to me, ‘Hurry up and get out of Jerusalem quickly, because they will not agree to your witness concerning me.’” —Acts 22:17-18

“And Paul, when the governor nodded to him to speak, answered: ‘Knowing well that this nation has had you as judge for many years, I readily speak in my defense the things about myself, as you are in a position to find out that for me it has not been more than twelve days since I went up to worship in Jerusalem; and they found me neither in the temple arguing with anyone nor causing a mob to rush together, either in the synagogues or throughout the city…’” —Acts 24:10-12

Clearly, the apostles did not consider the temple as unholy. Quite the contrary, they not only preached to the Jews in the temple, but also went to the temple to worship and pray. An angel even commanded Peter to go to the temple and preach. Had they considered Judaism to be a false religion Jesus’ disciples would never have based their Christian activities upon the temple. And to emphasize the point, in the account in the 22nd chapter of Acts Jesus even appeared to Paul in a vision while he was in the temple praying, telling him to get out of there because the Jews were going to kill him. If Jesus considered the temple to be unholy wouldn’t he have told Paul to get out on the basis that the temple was unclean?

The fact that the Christian Jews in Judea continued to worship in the temple long after they were anointed underscores the importance of Jesus’ warning to them: “Therefore, when you catch sight of the disgusting thing that causes desolation, as spoken about by Daniel the prophet, standing in a holy place (let the reader use discernment), then let those in Judea begin fleeing to the mountains. Let the man on the housetop not come down to take the goods out of his house, and let the man in the field not return to pick up his outer garment. Woe to the pregnant women and those nursing a baby in those days! Keep praying that your flight may not occur in wintertime nor on the Sabbath day; for then there will be great tribulation such as has not occurred since the world’s beginning until now, no, nor will occur again. In fact, unless those days were cut short, no flesh would be saved; but on account of the chosen ones those days will be cut short.”

Seeing that the Jewish Christians did not abandon Jerusalem or the holy temple until the disgusting thing appeared, requiring them to exercise faith in Jesus’ words, there is no legitimacy in the Watchtower’s claim that Jerusalem foreshadows Babylon the Great. Instead, it aptly prefigures Jehovah’s earthly organization now, which as Daniel reveals (let the reader use discernment) is due to suffer desolation when the last king comes on the scene.

Sadly, Bethel’s blindness finds a parallel with the Jews who did not discern the time of their being inspected.