Many Will Be Stumbled and Betray One Another

Many Will Be Stumbled and Betray One Another

At Matthew 24:6 is recorded Jesus’ words of warning to his disciples: “You are going to hear of wars and reports of wars; see that you are not terrified. For these things must take place, but the end is not yet.”

Next Christ foretold: “For nation will rise against nation and kingdom against kingdom, and there will be food shortages and earthquakes in one place after another. All these things are a beginning of pangs of distress.”

Are we to believe that the “beginning pangs of distress” span generations, only to give way to a prolonged period of relative peace, and that the generation who heard the original reports of wars passes away long before all things are fulfilled? As strange as it may seem that is exactly what Jehovah’s Witnesses now believe.

Meanwhile, reports are hitting the net that the nations are feverishly preparing for global war. Since 2001 the United States and its NATO allies have used the phony war on terror as a pretext to invade Afghanistan and Iraq and more recently conducted bombing campaigns on Libya, for humanitarian purposes. All during the past decade the US has been quietly building hundreds more military bases and outposts around the world, while developing more and more sophisticated weaponry.

Next on the list of targeted nations is Syria and Iran. But Syria and Iran are heavily armed and have strong ties with both China and Russia. Any attack, especially on Iran, will likely draw Russia and China into the conflict, leading to a theater of war involving virtually all the world’s nuclear powers.

The Watchtower has assured Jehovah’s Witnesses that there will be no third world war – that the sign of the conclusion of the system of things cannot possibly display itself more convincingly in the future. But over the years the Watchtower Society has surreptitiously revised numerous aspects of the manifestation of the sign, assigning them a future fulfillment – this after almost a century since Christ supposedly arrived as a thief in the night. For example, Jesus foretold that men would become faint out of fear in dread of the things coming upon the world. For decades Jehovah’s Witnesses were told that this aspect of prophecy was in full display in the world. Now, though, the Watchtower has unceremoniously shifted its fulfillment to the future.

The Watchtower also used to teach that the disgusting thing was already standing where it had ought not to stand. But that aspect of the sign has also been shifted to the future as well. This means that no one on earth has seen all the things occur that Jesus foretold. But did not Jesus say, “When you see all these things know that I am near at the doors”? By the Watchtower’s own admission we have not seen all these things. And since no one alive today personally experienced the First World War, the reality is that the sign of the end is not yet manifested to us in any respect.

But that can change very, very quickly. 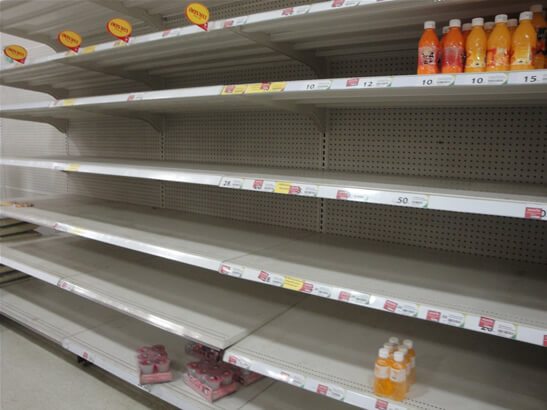 The question all of Jehovah’s Witnesses ought to consider is this: How will I react if the world is suddenly plunged into world war and if food shortages become commonplace in affluent nations due to hyperinflation or outright economic collapse?

Concurrent with that, what if there is another killer virus like the Spanish Flu, perhaps even a pestilence intentionally unleashed in biological warfare? Will you accept those events as the authentic sign of Christ standing at the door and act accordingly, even if the Watchtower does not approve such a view?

But in the event that the horsemen of the Apocalypse are loosed in the near future what credibility could the Watchtower Society possibly have then anyway? After all, they are God’s appointed faithful and discreet slave and watchman class. How could they possibly be so wrong so as to mislead millions of trusting sheep on something as important as the return of Jesus Christ? What will happen to the faith of Jehovah’s Witnesses when they are squarely faced with the fact that their cherished 1914 parousia is nothing more than an artfully contrived false story – a mere operation of error? What then?

After foretelling the beginning pangs of distress Jesus went on to say: “Then people will deliver you up to tribulation and will kill you, and you will be objects of hatred by all the nations on account of my name. Then, also, many will be stumbled and will betray one another and will hate one another.”

In that context Jesus also foretold that false prophets will arise and mislead many. The world is thoroughly blinded by Satan and always has been, so what is the point of further misleading the misled? Satan intends to mislead the chosen ones, which, as Jesus indicated, the deceptive machinations could conceivably deceive even them, adding: “if that were possible.” What could possibly deceive the chosen ones? The only possibility of their being overreached by Satan is by means of their trusted Watchtower.

The irony is, the Watchtower has long been accused of being a false prophet due to its many unrealized expectations. But during the authentic parousia the stakes will be raised considerably. At that time Jehovah’s Witnesses will be subjected to numerous false prophets, likely in the form of the Watchtower and perhaps splinter groups, who will be intent on preventing Christians from following the real Christ.

It is indisputable that the Watchtower Society dominates the faith of Jehovah’s Witnesses. Witnesses affectionately refer to the organization as “mother.” It is inevitable, then, that masses of Jehovah’s Witnesses are going to be stumbled when their mother is disgraced and silenced – even as the prophet has written: “And you will certainly stumble in the daytime, and even a prophet must stumble with you, as at night. And I will put your mother to silence. My people will certainly be silenced, because there is no knowledge.” – Hosea 4:5-6

Those who are mere followers of men, especially prominent elders who boast of being ‘Society men,’ will have their faith shaken to the core. Those who break with the Society, in whatever form it will exist then, in order to follow Christ, will be persecuted and hated by their former brothers. Under conditions of martial law will you have the courage to keep preaching, even without the support materials provided by the Watchtower? Will you have the faith to go it alone, even under the threat of being interned in a Halliburton concentration camp?

The true chosen ones will be branded as members of a dangerous cult. Did not Jesus also forewarn that family members would hand over their own relatives to have them put to death. This, too, is part of the sign and certain to be fulfilled among families of Jehovah’s Witnesses and ex-Jehovah’s Witnesses.

While such an outcome may seem highly implausible at the moment, the world can change literally overnight. As the nations now stand at the brink of nuclear war and global financial collapse, it behooves all of Jehovah’s Witnesses to seriously consider the grim and unpleasant scenario I have presented as a reality we all will soon face.