Life, Death and Beyond

Life, Death and Beyond

The truth is simple. The sad fact is, though, most people prefer to believe lies. And consequently, the truth is an alien thing to them. No doubt the primary reason most people embrace the prevalent lies common to the world is due to the evil influence of the one whom Jesus described as both the ruler of the world and the father of the lie – Satan.

One of the most pervasive lies among both religious and non-religious persons alike is the belief that humans have a soul that lives on after death. If any religious belief could be considered universal it is the belief in an immortal soul. The belief in an immortal soul is as ancient as it is widespread. Ironically, the most ancient and authoritative book on such matters of belief – the Holy Bible – does not teach it. That is why Jehovah’s Witnesses do not believe in the immortality of the soul.

The simple truth contained in the ancient Scriptures is that man is mortal and death brings about a complete loss of consciousness. That is why the Bible speaks of those asleep in death. Death is likened to sleep because when a person is deep asleep they are not conscious. Death is the opposite of life. There is no support in the Bible for the popular belief in an undying soul.

The truth revealed in the Bible is very simple: God originally made man out of the dust of the earth and animated him with the spark of life. The Scriptures word it this way: “And Jehovah God formed man of the dust of the ground, and breathed into his nostrils the breath of life; and man became a living soul.” – Genesis 2:7 (American Standard Version)

However, most modern translations do not translate Genesis 2:7 to say, “Man became a living soul,” for obvious reasons. Instead, they use expressions like: “and the man became a living being.” (NIV) But the original Hebrew word used there is nephesh, which in other passages is translated as soul. Evidently the translators of popular Bibles like the New International Version prefer not to confuse their readers with inconvenient truths, such as the obvious truth that man is a soul, rather than being endowed with an immortal soul.

Elsewhere in the Bible, such as the very first chapter in Genesis, animals and even fish are referred to as living souls. (Genesis 1:21) Again, translators of popular versions also inconsistently render those passages without using the word soul, preferring to use the word “creatures” instead and usually without providing so much as a footnote explaining their omission. Obviously, this is done in order to perpetuate the fraud that humans have souls that survive death.

But according to the way the Hebrew word for soul is used, it is apparent that a soul is any breathing creature. In fact, the Hebrew word nephesh literally means “breather.” And when a breather stops breathing the soul dies. (“Soul” and “Spirit” – What Do These Terms Really Mean? – Watchtower) That soul is used in connection with animals, the word translated as “animalistic” literally says soulical.

The word soul is also used to describe the life that a person possesses as a living soul. That is why some passages speak of the soul leaving or going out of a person, meaning that they died.

Just as the scripture states that God created man out of the dust, at death man decays into dust. That is what Jehovah told Adam when sentencing him to death due to his disobedience. “In the sweat of your face you will eat bread until you return to the ground, for out of it you were taken. For dust you are and to dust you will return.”

THE RESURRECTION FROM THE DEAD

Rather than an immortal soul, the Bible holds out the hope of a resurrection from the dead. The word resurrection is translated from the Greek word anastasis, which literally means to stand up again, in the sense of standing up from a prone position in the grave.

When Jesus was on the earth he resurrected four people back to life. (It is possible that he performed more than four resurrections, but only four are recorded in the Bible.) 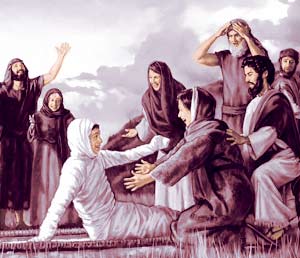 On one occasion Jesus and his entourage encountered a funeral procession and a crowd of people coming the opposite way on the road out of the city of Nain. A widow had lost her only son. Jesus stopped the procession and told the mother to stop weeping. He walked over to the dead man and commanded him to get up and the young man sat up and started speaking. Naturally, those who observed this miracle were astonished and fearful.

On another occasion Jesus resurrected his personal friend, a man by the name of Lazarus. In this instance Lazarus had already been buried. But Jesus asked to be taken to the memorial tomb, where he then commanded to have the stone rolled away from the entrance to the tomb. Then with a loud voice Jesus commanded the dead man to come out. And he came out of the tomb wrapped in burial cloth.

No doubt there were many Jews who died during Jesus’ ministry. He did not resurrect him all. And those whom he did resurrect eventually died again. But the reason Jesus did resurrect the few that he did was in order to demonstrate his power so that we may have faith in the Lord’s promise to resurrect all of the dead when his kingdom comes. Jesus stated at John 5:28-29: “Do not marvel at this, because the hour is coming in which all those in the memorial tombs will hear his voice and come out, those who did good things to a resurrection of life, those who practiced vile things to a resurrection of judgment.”

“All those in the memorial tombs” basically means most people who have ever lived and died. Jehovah’s Witnesses believe that virtually all of mankind will receive the resurrection—an earthly resurrection that is.

The dead will be brought back to life as people and they will be given an opportunity to attain everlasting life in paradise. Even unbelievers and wicked persons will receive a resurrection. That is why Jesus promised the evildoer who was executed next to him that he would be with them in paradise. Paul also said that he had hope in God that there would be a resurrection of both the righteous and the unrighteous.

However, after their resurrection those who were unrighteous in this life will be on probation. That is what Jesus meant by “a resurrection of judgment.” People will be judged by what they do after they are resurrected. If a person continues in their previous ways they will be judged worthy of death and they will die again. This is why the Bible uses the expression “the second death,” because some people will literally die twice. The second death is permanent.

Does Death End It All? (Jehovah’s Witnesses Official website)