Kingdom Not Coming with Striking Observableness

Kingdom Not Coming with Striking Observableness

Your throne will be firmly established forever.—2 Sam. 7:16.

Jehovah made this covenant with David during David’s reign in Jerusalem, promising him that the Messiah would be his descendant.  Thus, Jehovah further narrowed the line of descent of the offspring of the woman and established that an heir of David would have “the legal right” to the throne of the Messianic Kingdom.  Through Jesus, David’s kingship “will be firmly established forever.” Yes, the Messiah’s rule will never become corrupt, and its accomplishments will last forever! While the Davidic covenant makes it certain that the offspring would have a kingly function, that role alone would not suffice to bring blessings to people of all nations. For them to be truly blessed, they would have to be freed from their sinful state and brought into Jehovah’s universal family. To accomplish this requires that the offspring also serve in a priestly capacity.

People who accept the reality of God’s Kingdom naturally want to know when all of this is going to come about. Some two thousand years the apostles of Christ were especially keen on finding out, so they approached Jesus privately and asked: “Tell us, when will these things be, and what will be the sign of your presence and of the conclusion of the system of things?”

From virtually the very beginning of the publishing campaign of the Watchtower Bible and Tract Society the presence of Christ has been heralded, not as a future event, but as an ongoing reality.

After numerous adjustments and reiterations Jehovah’s Witnesses are convinced that the sign of Christ’s presence and the conclusion of the system have been in evidence since 1914.

It is a concrete tenet of the faith of Jehovah’s Witnesses, so absolute that any students who do not accept it as God’s Truth are not allowed to be baptized and any baptized Jehovah’s Witnesses who do not express their whole-hearted acceptance of the 1914 doctrine are subject to expulsion from their respective congregations on grounds of apostasy!

For the most part the Watchtower has affixed 1914 as the date for Jesus to receive the Kingdom upon a somewhat complex chronological calculation predicated upon the seven times of Nebuchadnezzar’s madness. Except the seven times in itself does not point to 1914. First, the seven times have to be converted into a period of years. This is justified based upon the fact that because three and a half times of Daniel and Revelation are the equivalent of 1,260 days it is extrapolated that the seven times must represent a value twice that, or 2,520 days.

But we are still talking about days, not years. In order to covert the days to years the Watchtower unjustifiably assumes that the 2,520 days actually represent years because on a couple of occasions Jehovah’s decree was ‘a day for a year.’ It should be noted, though, that there is no evidence that the 1,260 days symbolize years. On the contrary, Revelation plainly states that the time, times and half time (3½) or 1,260 days are equal to 42 months.

Besides the chronologic sophistry, the loose thread in the seven times formula is the inconvenient fact that there is no basis for supposing that the seven times are the same thing as the appointed times of the nations that Jesus spoke about in connection with the nations trampling upon Jerusalem. The context indicates that the nations trampling Jerusalem for an appointed time begins when the disgusting thing stands where it ought not.

The significance of the Watchtower’s error is that Jesus forewarned his disciples to be on guard against those who would falsely announce that the Christ is already here or there.

“FOR JUST AS LIGHTNING FLASHES…”

When Jesus appeared in the flesh some two millennia ago he did not just show up unannounced. The legal basis for his appearance was established long beforehand and many details were recorded in prophecy, such as the place of his birth and circumstances surrounding his death. The 70 weeks prophecy in Daniel even pinpointed the approximate time of his baptism and length of his ministry.

In spite of the overwhelming evidence that Jesus himself provided regarding his credentials as the Messiah, having the legal right as Ezekiel foretold, the majority of the Jews refused to accept him as such. The reason that was the case is in no small part because of the influence of the Pharisees. They saw Jesus as a threat to their power and authority in Jewish society. Despite their opposition Jesus patiently answered their questions and tried to reason with them.

Many translations render the verse at Luke 17:21 to read “the kingdom of God is within you,” which has misled many persons to assume that Jesus was saying the kingdom was within each person. But that could not have been the case because at Matthew 23:13 Jesus said to the Pharisees: “Woe to you, scribes and Pharisees, hypocrites! because you shut up the Kingdom of the heavens before men; for you yourselves do not go in, neither do you permit those on their way in to go in.”

It should be evident that Jesus was not telling the faithless Pharisees that the Kingdom of God was in their hearts. (Of note, the hugely popular New International Version also renders Luke 17:20 the same as the New World Translation.)

What did Jesus mean? He meant that because he was the king designate and he did not come with great pomp and ceremony with legions of angels showering rose pedals in his path, it was possible for people to not to even know the Messiah was walking among them; hence, the Kingdom of God did not show itself in some remarkable way —“with striking observableness.” 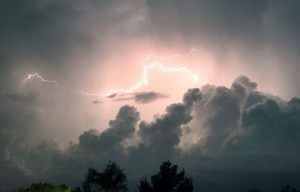 After saying that to the Pharisees Jesus continued to speak with his disciples, saying to them: Then he said to the disciples: “Days will come when you will desire to see one of the days of the Son of man, but you will not see it. And people will say to you, ‘See there!’ or, ‘See here!’ Do not go out or chase after them. For just as lightning flashes from one part of heaven to another part of heaven, so the Son of man will be in his day. First, however, he must undergo many sufferings and be rejected by this generation.”

In saying “first he must undergo suffering” it is evident that his preceding remarks are in reference to his return, long after his resurrection and ascension to heaven. “In his day” correlates to the Lord’s day. Paul used a similar expression in his letter to the Philippians, saying: “For I am confident of this very thing, that the one who started a good work in you will bring it to completion until the day of Christ Jesus.”

According to the inspired apostle “the day of Jesus Christ” is the completion of the work that Christ initiated in the first century. Or rather, the work of making disciples will be completed before the day of Christ Jesus.

It is significant that Jesus reiterated to his disciples what he stated to the Pharisees concerning people saying ‘See there,’ or ‘See here.’ However, in speaking to his disciples Jesus was not referring to his being in their midst then, but rather, to his second coming —the parousia. That is evident by the fact that Jesus used a similar expression in the 24th chapter of Matthew.  In warning his followers not to be deceived by those who announce that the Christ is in the inner chambers of in the wilderness Jesus said: “For just as the lightning comes out of the east and shines over to the west, so the presence of the Son of man will be. Wherever the carcass is, there the eagles will be gathered together.”

Although on the one hand the Watchtower readily admits that all of the features of the sign of the presence of the Son of man are not in evidence, and hence cannot be observed, on the other hand Bethel insists that Jehovah’s Witnesses have discerned his lightning-like presence has begun already. Here is what the February 15, 2008 Watchtower said:

Those without spiritual understanding today have felt that there has been no “striking observableness” with regard to the sign of Jesus’ presence. They reason that everything is continuing on as it did in the past. On the other hand, Christ’s faithful anointed brothers, the modern-day John class, have recognized this sign as if it were a flash of lightning and have understood its true meaning.

Without question the Watchtower’s 1914 doctrine is a massive delusion. The future coming of Christ will be as striking as a thunderbolt in the black of night.

However, like in the first century the Kingdom itself will not be on display in striking observableness. That is because Jesus will only come alongside Jehovah’s chosen ones.