Jesus, who was made a little lower than the angels

Jesus, who was made a little lower than the angels

How would this ransom satisfy justice? As a perfect man, Jesus had prospects similar to those of Adam before he sinned. Jehovah’s purpose was to fill the earth with Adam’s perfect offspring. Hence, with deep love for his Father and for Adam’s descendants, Jesus gave up his human life in sacrifice. Yes, Jesus gave up a perfect human life that corresponded to what Adam had lost. Thereafter, Jehovah restored his Son to life as a spirit.  Jehovah could justly accept the sacrifice of that one perfect man, Jesus, as a ransom, or purchase price, to buy back Adam’s family and give them the life prospects that Adam had forfeited. In a sense, Jesus took the place of Adam. 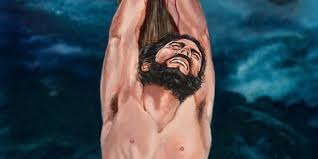 If a person does not understand the basic truth they cannot appreciate the ransom. One of the most fundamental truths, which unfortunately eludes the masses of churchgoers, is that God made mankind to live forever. There is no such thing as an immortal soul or spirit that survives death. Jehovah intended for Adam and Eve and all of their offspring to live forever on earth. Death was only the result of disobeying God’s simple command.

As the text points out, the value of Jesus’ life corresponded with that of Adam before he sinned. Paul explained it in the 15th chapter of I Corinthians by referring to Jesus as “the second man” and “the last Adam.” He was the second perfect man and the last perfect man that God will personally father. So, it was Jesus’ value as a sinless human that he sacrificed in order to purchase the right to become mankind’s new father.

And because Jesus had been born again as an anointed son when he was on earth God was justified in resurrecting him back to heaven. (A resurrection in the flesh would nullify the sacrifice he made.) And although Jesus had sacrificed his perfect human life he retained the right to subdue the earth, which God had originally commanded the first man. Paul explained Jesus’ future role in his letter to the Hebrews: “For it is not to angels that he has subjected the inhabited earth to come, about which we are speaking. But in one place a certain witness said: ‘What is man that you keep him in mind, or a son of man that you take care of him? You made him a little lower than angels; you crowned him with glory and honor, and appointed him over the works of your hands. All things you subjected under his feet.’ By subjecting all things to him, God left nothing that is not subject to him. Now, though, we do not yet see all things in subjection to him. But we do see Jesus, who was made a little lower than angels, now crowned with glory and honor for having suffered death, so that by God’s undeserved kindness he might taste death for everyone.”

In saying that ‘now we do not see all things in subjection to him,’ that is to Christ, it implies that in the future we will see all things in subjection to him. Indeed, that will be when the Kingdom comes. Then the world will no longer be dominated by demons and evil men. Ultimately, Jesus will rehabilitate mankind —bringing them to sinless perfection and direct his ransomed offspring to develop the earth into the paradise God intended it should become.