Jehovah’s Witnesses and the Last Days

Jehovah’s Witnesses and the Last Days

QUESTION: In reading Acts 2:14-21, Peter quotes from Joel chapter 2. How do you reason that Joel’s prophecy applies to the modern day parousia, when Peter applied those verses to their time? Frankly, how could Peter have applied those prophetic words to then? Did the sun darken, moon into blood, people calling on the name of Jehovah to be saved then?

ANSWER: It is interesting that the apostle Peter, who had just been among the very first Jews anointed by the spirit just moments before (other than Christ himself), addressed the perplexed Pentecost crowd by quoting from the Hebrew prophecy of Joel, saying to them:  “‘And in the last days,’ God says, ‘I will pour out some of my spirit on every sort of flesh, and your sons and your daughters will prophesy and your young men will see visions and your old men will dream dreams, and even on my male slaves and on my female slaves I will pour out some of my spirit in those days, and they will prophesy. And I will give wonders in heaven above and signs on earth below—blood and fire and clouds of smoke. The sun will be turned into darkness and the moon into blood before the great and illustrious day of Jehovah comes. And everyone who calls on the name of Jehovah will be saved.”’

What is noteworthy is that nowhere in the prophecy of Joel does it specifically say that the things contained therein will occur in “the last days.”

That being the case, since Jesus also referred to the sun going dark and the moon turning to blood during the conclusion of the system, it could certainly be argued that it is implied by the symbolism of Joel. And, of course, that same symbolism is employed in Revelation too, in connection with the crash of the system.

So, we must assume that the apostle’s applying the prophecy of Joel to the ultimate “last days” is intended for us as an inspired interpretation of Joel.

First, though, in what sense can the prophecy reasonably apply even in a limited way to the events of the first century?

Since Jesus had already pronounced woe upon the holy city days before his death, the Jewish system of things back then was already in its last days. 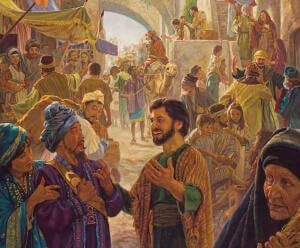 As for all of the apocalyptic phenomenon, keep in mind that the reason the Jews and sojourners from distant lands were congregated in the street in front of the place where the 120 had been gathered in an upper room, was because they were astonished by the sound of this mysterious, rushing wind that was evidently audible throughout Jerusalem. That was certainly a wondrous sign that accompanied the outpouring of the spirit.

Also, each of the 120 anointees had had visible tongues of fire hover over their heads, as they each began to speak in various languages theretofore unknown to them. No doubt that is what Peter was alluding to when he cited Joel and the accompanying signs, such as fire.

Also, it had just been exactly 50 days since the Passover when Jesus had been executed. And no doubt the Jews were surely still abuzz over the awe-inspiring events that accompanied the death of God’s Son; most notably, the sun was turned into darkness for three hours — beginning at high noon — right as Jesus expired. That was a powerful sign in heaven above, as Joel foretold.

Also, a great earthquake simultaneously occurred, which disentombed the corpses of holy ones. What a scene that must have been — talk about a zombie apocalypse! That was most assuredly a fear-inspiring sign on the earth below, as Joel also foretold.

The very fact that Jesus died on the Passover and his blood was literally poured out like the sacrificial Passover lamb, was also a significant sign. And it was not long after Pentecost when the apostle James was killed by the Jews, and Stephen, and no doubt many others of those newly anointed ones contributed their own blood as a sign of Jehovah’s coming wrath upon the unrepentant Jews.

But those who called upon Jehovah in faith and who repented were saved into the kingdom of Christ, as several thousand were in response to Peter’s message. But those who did not listen and who did not concern themselves with Jesus’ warning regarding the destruction of Jerusalem surely experienced the brunt of the illustrious day of Jehovah’s anger if they were alive in 70 C.E.

Speaking of the uniqueness of that day, Joel wrote: “Never before has there been one like it, and never again will there be another through the years of all generations.”

Surely those words put us in mind of the great tribulation, which Jesus said would come upon the entire world —not just Jerusalem. Regarding the totality of the tribulation, Jesus said: “Such as has not occurred since the world’s beginning until now, no, nor will occur again.”

Besides, the book of Joel, which indeed centers around Zion and Jerusalem, depicts “Jerusalem” being saved by God. Obviously, that was not the case in the first century. Of that Jerusalem and the temple Jesus’ words came true — not a stone was left upon a stone.

And not only that, but the prophecy of Joel portrays the attack upon Zion as the precursor of Jehovah entering into judgment with all the nations —obviously pointing to the situation Revelation describes as Armageddon. The opening words of the third chapter state: “For look! in those days and in that time, when I bring back the captives of Judah and Jerusalem, I will also gather together all the nations and bring them down to the Valley of Jehoshaphat. I will enter into judgment with them there in behalf of my people and my inheritance Israel, for they scattered them among the nations, and they divided up my land among themselves.”

The very context from which Peter quoted on Pentecost specifically states that God will save Israel. “And you will have to know that I am in the midst of Israel and that I am Jehovah your God—there is no other! My people will never again be put to shame. After that I will pour out my spirit on every sort of flesh, and your sons and your daughters will prophesy, your old men will dream dreams, and your young men will see visions. And even on my male slaves and female slaves I will pour out my spirit in those days.”

As with virtually all prophecy, “Israel” and “Jerusalem” are merely symbols for the Christian organization.

In the first century those who were adopted into God’s family as sons and daughters of Zion did indeed receive miraculous powers. Besides their speaking in tongues, so-called, some of them received visions. For instance, Peter had a vision of a smorgasbord of unclean animals. Right before his martyrdom Stephen had a vision of Christ in heaven. But what about the ultimate fulfillment?

Going back to the very beginning of the Watchtower Society it is obvious that there was an outpouring of the anointing spirit. It was not evidenced by any miraculous display, but by the sudden appearance of a small group comparable to the 120 who were fired with the desire to evangelize the world and teach people to call upon the name of Jehovah. After the First World War the series of Cedar Point conventions marked another outpouring that took the work of making known the name of Jehovah to another level.

Ironically, though, the prophecy of Joel presages the end of the worldwide work of Jehovah’s Witnesses. That is the message conveyed regarding the last days. Ultimately the outpouring of God’s spirit is to occur in the aftermath of the end of the preaching sponsored by the Watchtower, after his people are devastated by the locust holocaust.

It is worth noting that in the first century all those who were anointed and were born again became the spiritual sons of daughters of Jehovah God. The anointing spirit begot them to that special relationship with the heavenly Father. However, take special note of the wording in the passage in Joel. It makes a distinction between the sons and daughters and the male slaves and female slaves — all of whom are blessed by the outpouring of God’s spirit. What is the significance of that distinction?

Jehovah’s Witnesses are unique among all those who call themselves Christians, in that, the vast majority of Jehovah’s Witnesses do not entertain a heavenly hope. They do not consider themselves to be the born again sons of the Kingdom —but merely friends of God. Their hope is to survive the tribulation and live on the earth. And the prophecy of Joel verifies that distinction in referring to those who are not sons and daughters, but male and female slaves of God.

Also, the wording of the passage suggests that, unlike in the first century when the anointing begot sons and daughters, the outpouring after the holocaust will come upon those who are already anointed sons and daughters. This speaks to the phenomenon, whereby, those who have been called into the Kingdom are sealed by God as his approved sons and declared righteous — sinless, in fact. Jesus said of them: “At that time the righteous ones will shine as brightly as the sun in the Kingdom of their Father. Let the one who has ears listen.” 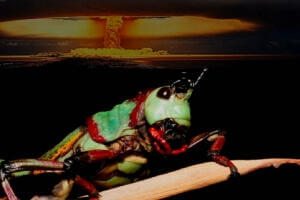 Whereas all Christians are considered to be shining as illuminators, those who will then shine as brightly as the sun in the Kingdom are those who will be fully enveloped in God’s spirit and completely enlightened as regards the entirety of Christ himself.

This will occur in stark contrast against the backdrop of the world’s envelopment in total bleakness; the fire and blood of warfare and columns of smoke associated with the ominous mushroom cloud signature of the atomic bomb.

They will see visions, not in the sense that the prophets of old saw visions and had inspired dreams, but those sons and daughters during the last days will live the visions, experiencing the vision of the Transfiguration by their seeing the glorious Christ himself. It will then be the full light of day. Satan’s dark world will then pass away.