Jehovah’s Purpose Will Be Accomplished

Jehovah’s Purpose Will Be Accomplished

Did God really say that you must not eat from every tree?—Gen. 3:1.

After preparing our beautiful planet for human habitation, Jehovah issued three decrees regarding humans: Our God would create mankind in his image, humans were to expand Paradise globally and fill the earth with righteous offspring, and humans were prohibited from eating from the tree of the knowledge of good and bad.  After the creation of man, adherence to the other two decrees was all that was necessary to have God’s purpose fulfilled. In a villainous attempt to thwart God’s purpose, Satan the Devil instigated a rebellion. He did so by focusing his attention on the decree he could most easily influence—the one that required obedience on the part of man. He tempted the first woman, Eve, to disobey the prohibition regarding the tree of the knowledge of good and bad.  In doing so, Satan challenged God’s right to rule over His creation.

There is another aspect that factors in. And that is, immediately after God created Eve he decreed that he was going to rest. His rest, or sabbath, was obviously meant to be understood to be in connection with creation. God was not going to create anything else on the earth.

This was extraordinary in as much as God had already declared that his intention was to fill the earth with humankind. That meant that the accomplishment of his stated purpose depended upon Adam and Eve and their offspring to carry out —or did it? 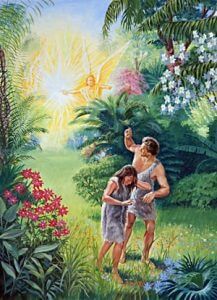 No doubt Satan reasoned that if he could get humans to break God’s simple command and thus bring upon themselves the condemnation of death, then he could cause God’s purpose to fail, because if God put Adam and Eve to death as he said he would, then how could they fill the earth and subdue it in the manner God intended?

And if God let them off the hook, so-to-speak, then he would become a liar because he said ‘on the day of your eating the fruit you will surely die.’

And if God put them to death and created two new humans he would break his own sabbath. No doubt the Devil thought he had put Jehovah into an impossible situation.

God’s response was to allow the human race to continue, albeit in a dying condition, with the provision of a ransom, which would require that another perfect man sacrifice his life in obedience. But where could a perfect man be found?

If God created another Adam then he would violate his sabbath. That is why Jehovah turned to his firstborn son in heaven, who came to be in the form of man —what Paul called the “second man,” meaning the second perfect man. Having lived before the beginning of the physical creation the transferral of God’s son from heaven to earth did not violate his sacred rest. And when Jesus was born again from the spirit he could return to heaven after his death.

With the ransom paid it is now possible, legal and just, for God to reclaim and rehabilitate Adam’s dead and dying offspring in what Jesus referred to as the “recreation.” Those resurrected, along with the survivors of the great tribulation and their offspring, will then fill the earth and subdue it under Christ’s direction.

When Jehovah’s sabbath expires at the end of Christ’s 1,000 year reign his purpose will have been accomplished and it will be as though Satan and his evil brood never even existed.