The God of gods, Jehovah, has spoken

The God of gods, Jehovah, has spoken

Those who study ancient Hebrew Bible manuscripts, such as the Dead Sea Scrolls, are struck by the many occurrences of the Tetragrammaton—the four Hebrew letters that represent God’s name. The divine name appears not only in those ancient Hebrew manuscripts but also in some copies of the Greek Septuagint from the second century B.C.E. through the first century C.E. Despite the clear evidence that the personal name of God belongs in the Bible, many translations completely omit the sacred name of God. In 1952, the Revised Standard Version was published. That version omitted the name, reversing the policy of the editors of the American Standard Version of 1901. Why? The preface says: “The use of any proper name for the one and only God . . . is entirely inappropriate for the universal faith of the Christian Church.” That set a pattern for many subsequent translations, English and non-English.

Years ago one of Jehovah’s Witnesses remarked on why the churches prefer not to use the name of Jehovah. The reason being, he suggested: ‘Jehovah doesn’t want them to.’ How evidently true.

One of the common reasons people give for their avoidance of the name is that no one knows how the Hebrew YHWH ought to be pronounced. Others object to the name “Jehovah” because Hebrew doesn’t have a jay sound. The reasoning is that the name must be pronounced exactly as a Hebrew would have pronounced the name 4,000 years ago, or not at all. Yet, people freely use the dozens of other Hebrew proper names that have also been latinized with the letter “J” and pronounced completely different than in Hebrew. Obviously, the name Jesus was not spelled and pronounced the same in Greek, Aramaic, Hebrew or Latin, as in English.

What is clear, is that people do not merely have an aversion to the name of Jehovah, they have a distinct dislike for the person of God. The reason being, as Paul bluntly stated in the first chapter of Romans, people are “haters of God.” Leaving God nameless makes him less real, at least in their unenlightened minds. 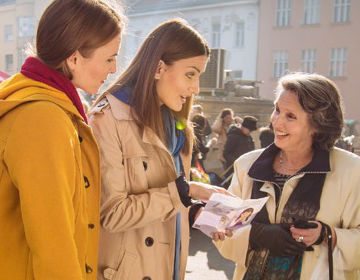 What is remarkable, though, is that the satanic plot to blot out the name of Jehovah from the book he inspired has failed spectacularly.

Although there has been a concerted effort to remove the name of God from modern translations of the Bible and from common usage, replacing Jehovah with Jesus in the minds of people, the Watchtower Bible and Tract Society has effectively countered that campaign. Not only has the name Jehovah become commonplace in English, but Jehovah’s Witnesses around the world have published the name of God in hundreds of languages and dialects. The New World Translation itself is now published in over 100 languages —each using the name of God in the thousands of places it appears in Hebrew. No wonder truth-haters consider the NWT to be a heretical translation!

As it stands now the world has essentially been divided into two camps. Those who do not know or call upon the name of Jehovah and those who do. From all appearances the stage is set for the judgment to begin. The 50th Psalm describes it this way: “The God of gods, Jehovah, has spoken; He summons the earth from the rising of the sun until its setting. Out of Zion, the perfection of beauty, God shines forth. Our God will come and cannot remain silent. Before him is a consuming fire, and a great storm rages all around him. He summons the heavens above and the earth, so as to judge his people: ‘Gather to me my loyal ones, those making a covenant with me over sacrifice.’ The heavens proclaim his righteousness, for God himself is Judge.”

The coming global calamity will serve as the official summons to all the earth —the “earth” being, not the literal planet, but rather, the earthlings that inhabit it.

As the Christian apostle, Peter, revealed, judgment starts with God’s house first. (1 Peter 4:17) It is against the backdrop of nation rising against nation, global food shortages and searing pestilences, the consuming fire of Jehovah’s judgment will initiate a conflagration among those who hypocritically call upon the name of Jehovah among the leadership of Jehovah’s Witnesses. The prophecy of Isaiah describes it this way: “‘Now I will rise up,’ says Jehovah, ‘now I will exalt myself; now I will magnify myself. You conceive dried grass and give birth to stubble. Your own spirit will consume you like a fire. And peoples will become as the burnings of lime. As thorns cut down, they will be set ablaze with fire. You who are far away, listen to what I will do! And you who are nearby, acknowledge my might! The sinners in Zion are in dread; trembling has seized the apostates: ‘Who of us can live where there is a consuming fire? Who of us can live with unquenchable flames?’” —Isaiah 33:10-14

Although the Watchtower has been instrumental in publishing the name of Jehovah far and wide, the Bethel leadership of the organization has also profaned the name of God and brought reproach it. Indeed, there is a growing apostate influence. But having set themselves on high as the masters of the universe the existence of apostates among the people of God will prove to be as perishable as dried grass and bramble before a roaring fire. Did not Jesus illustrate this very thing when he spoke of the angels uprooting the weeds from among the wheat and casting them into the fiery furnace during the conclusion?

The 43rd chapter of Isaiah speaks of the gathering of all the earth for judgement, during which time a gathering of all the chosen ones also takes place. What is most notable is that Jehovah’s sons and daughters, those who have been born again as part of the new creation, as was Christ, “the Firstborn of many brothers,” (Romans 8:29) do not simply call on the name of Jehovah; rather, they will be called by his name: “‘I will say to the north, ‘Give them up!’ And to the south, ‘Do not hold them back. Bring my sons from afar, and my daughters from the ends of the earth, everyone who is called by my name and whom I created for my own glory, whom I have formed and made.’ Bring out a people who are blind, though they have eyes, and who are deaf, though they have ears. Let all the nations assemble in one place, and let the peoples be gathered together.”’ —Isaiah 43:6-9

Jesus spoke of this great gathering occurring after the tribulation —the “great storm” that rages all around him, as it is referred to in the 50th Psalm. Jesus said: “Immediately after the tribulation of those days, the sun will be darkened, and the moon will not give its light, and the stars will fall from heaven, and the powers of the heavens will be shaken. Then the sign of the Son of man will appear in heaven, and all the tribes of the earth will beat themselves in grief, and they will see the Son of man coming on the clouds of heaven with power and great glory. And he will send out his angels with a great trumpet sound, and they will gather his chosen ones together from the four winds, from one extremity of the heavens to their other extremity.”

After the faithless apostates and imposters are eliminated from among God’s people, the next phase of the judgment begins. After being disciplined to the proper degree for having blasphemed the name of Jehovah, those who continue to call upon the name of Jehovah in truth will receive the spirit in full measure. The prophecy of Joel foretells that after the destruction of the earthly organization God will make compensation, pouring out his spirit upon all who call upon his name. Joel 2:28-32 reads:  After that I will pour out my spirit on every sort of flesh, and your sons and your daughters will prophesy, your old men will dream dreams, and your young men will see visions. And even on my male slaves and female slaves I will pour out my spirit in those days. And I will give wonders in the heavens and on the earth, blood and fire and columns of smoke. The sun will be turned into darkness and the moon into blood before the coming of the great and awe-inspiring day of Jehovah. And everyone who calls on the name of Jehovah will be saved; for on Mount Zion and in Jerusalem there will be those who escape, just as Jehovah has said, the survivors whom Jehovah calls.”

Clearly, the name of God is important. Those who refuse to accept it are merely disqualifying themselves from receiving salvation during the great and awe-inspiring day of Jehovah.