An introduction to Joel, indeed!

An introduction to Joel, indeed!

From the time of J.F. Rutherford the Watchtower has explained the book of Joel in the most absurd way imaginable. The locusts and creeping caterpillars supposedly represent Jehovah’s Witnesses who devour the harvest of Christendom’s fertile fields of operation, forcing the terrified clergy to beseech Jehovah for relief from the hordes of unstoppable ministers who are scaling over their protective walls and sneaking through their windows with tracts and magazines. For example, here is an excerpt of such drivel from a Watchtower published 19 years ago:

When the “priests” of Christendom see Jehovah’s people in action and hear their warning of divine judgment, they become frantic. They beat their breasts in vexation and rage at the devastating effect of the Kingdom message. And they howl as their flocks slip away from them. With their pastures being denuded, let them spend the night in sackcloth, mourning over their loss of income. Before long, they will lose their jobs too! In fact, God tells them to mourn all night because their end is near. –WT 5/1/98 p.10

Amazingly, though, now it appears the Governing Body are timidly tip-toeing away from their long-held nonsensical interpretation; evidenced by their most recent highlights on the book of Joel introductory video  where an illustrated image of locusts is displayed as the narrator describes them as enemies of Jehovah. (Go to the 1:50 minute mark)

It is very subtle, to be sure. Nonetheless, it is a clear signal that the previous interpretation is no longer held. Of course, as is typical of the Watchtower, there is no acknowledgment of any sort of correction or error on their part. Nor do they dare elaborate on their new understanding. And no doubt most of Jehovah’s Witnesses will not even notice the little flicker of new light the Watchtower flashed in their cartoon or the fact it contradicts everything they have published over the decades. Sadly, most JW’s are probably even unaware of the Watchtower’s ridiculous interpretation of Joel. Perhaps that is best.

One of the first essays I mailed to various Bethel heads was on the book of Joel. That was back in 1997. In 2005 a chapter in Jehovah Himself Has Become King was devoted to the topic, as well as numerous articles on e-watchman over the recent years. So, maybe someone at Bethel is reading. Or maybe commonsense has simply prevailed. Not that it matters. In any case, it is ironic, but the book of Joel is addressed to Jehovah’s Witnesses; specifically to the elders, the leadership. Here is what Jehovah has said: “Hear this, you elders, and pay attention, all you inhabitants of the land. Has anything like this happened in your days or in the days of your forefathers? Tell about it to your sons, and let your sons tell about it to their sons, and their sons to the next generation.”

It is as if Jehovah speaks to his people from the point at which the locust onslaught commences. You might say the sudden attack of the voracious swarms of pestiferous insect-like invaders is a wake-up call. For a fact, the impending global calamity is the only way that God can command the attention of his elders and the “inhabitants of the land.”

WAKE UP YOU DRUNKARDS!

More pointedly, God next addresses the elders and priests with a rousing call, saying to them: “Wake up, you drunkards, and weep! Wail, all you wine drinkers, because the sweet wine has been taken from your mouths.”

The drunkards and wine drinkers are not literally consuming alcoholic beverages. Their intoxication stems from the exaltation of power, being the standard bearers of pure worship and all of that. The prophecy of Isaiah, which overlaps Joel in other areas as well, reveals that the drunkards are inebriated with their own importance and consequently are unable to discern Jehovah’s judgments. Isaiah 28:7 states: “And these also go astray because of wine; their alcoholic beverages make them stagger. Priest and prophet go astray because of alcohol; the wine confuses them, and they stagger from their alcohol; their vision makes them go astray, and they stumble in judgment.”

Imagining they are the keepers of all truth and that their every utterance is transmitted from God’s mouth to theirs, their vision of the future —of God’s unending protection and blessing —makes them go astray. They are reeling from over-indulgence in their own home-brewed theocratic spirits. Especially now that the Governing Body are enthroned in their new palatial world headquarters, it is as if in their spiritually inebriated state they imagine that the New Jerusalem has already come down from heaven to One Kings Drive. They are in for the shock of their lives.

Joel continues: “For a nation has come up into my land, mighty and without number. Its teeth are the teeth of a lion, and its jaws are those of a lion. It has devastated my vine and turned my fig tree into a stump, stripping them completely bare and tossing them aside, leaving their twigs white.”

God owns the whole earth. However, in times past he also took special ownership of a certain people and their land; namely, the Israelites. But the prophecy of Joel is not about the literal land of Israel or Jerusalem. Since the prophecy pertains to events that initiate the terrible and fearsome day of Jehovah the special property that belongs to God must be that which is associated with a people who belong to God; specifically, anointed Christians. That Christ owns a particular people is evidenced by the fact that the slave whom Christ ultimately judges to have been faithful in his commission to feed his domestics will be appointed over all of the master’s belongings.

So, when God speaks of “my land” and “my vine” and “my fig tree,” his property is related to the master’s belongings. To be sure, the apostle of Christ wrote concerning “a chosen race, a royal priesthood, a holy nation, a people for special possession, that you should declare abroad the excellencies of the One who called you out of darkness into his wonderful light.”

It is, then, this holy nation, the “special possession” of Jehovah that is destined to be devastated by the onrushing swarms. Seeing that the locust have the teeth and jaws of a lion would symbolize that the world-rocking military force is under the command of the seven-headed beast, which is portrayed as having the mouth of a lion.

What the prophecy of Joel is portraying is the complete and utter cessation of the worldwide preaching and teaching campaign the Watchtower has sponsored. That is what is symbolized in Joel by the following: “Wail as a virgin wearing sackcloth does for the bridegroom of her youth. Grain offering and drink offering have ceased from the house of Jehovah; the priests, the ministers of Jehovah, are in mourning. The field has been devastated, the ground mourns; for the grain has been devastated, the new wine has dried up, the oil has failed. Farmers are dismayed, vinedressers wail, because of the wheat and the barley; for the harvest of the field has perished. The vine has dried up, the fig tree has withered. The pomegranate, the palm, and the apple, all the trees of the field have dried up; for joy has turned to shame among the people.” 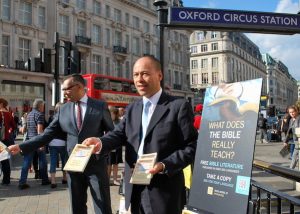 What would Jehovah’s Witnesses do without the Watchtower? How will the carry on without their weekly ration of food at the right time? How can they carry on their field ministry without the literature and other tools supplied to them by the anointed priests? We are about to find out.

But how could the entire global operation be shut down? Easier than you might imagine. People have become accustomed to the seeming permanence of the present system. They imagine it is going to go on and on, as surely as the sun rises everyday. But it is not. Although it is impossible to determine how it will come about, the utter collapse of the system is inevitable.

Already sane voices are warning that the Western financial system is reaching a point of debt implosion. At the same time world war has never been as imminent. If the system were to blowout —or rather, when the crash occurs —the money system will simply cease to function. What people imagine to be theirs, their money, stored away in some bank or stock, or some other financial institution, in reality are only so many digitized 1’s and 0’s on a computer hard drive, which can and will disappear into the cyber nether-land just as completely as a swarm of locust can devour a ripe field of barely within minutes. The false security of walls and windows are no barrier for the beast’s devouring hordes.

It is the very interconnectivity of the modern computer-driven system that is its greatest vulnerability. The aptly named Internet Windows may well typify the portal through which the symbolic voracious locusts enter —in the sense that every home is vulnerable to the thief, as stated at Joel 2:9: “Into the city they rush, on the wall they run. Onto the houses they climb, through the windows they enter like a thief.” 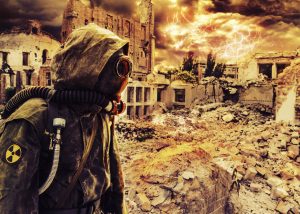 Without the modern means of finance, transportation and communication, the massive publishing operation of the Watchtower will simply cease, which is what is envisioned in Joel: “Has not food been taken from before our very eyes, and rejoicing and joy from the house of our God? The seeds have shriveled under their shovels. Storehouses are desolate. Granaries have been torn down, for the grain has dried up. Even the livestock groan! The herds of cattle wander in confusion, for they have no pasture! And the flocks of sheep bear the punishment. To you, O Jehovah, I will call; for fire has devoured the pastures of the wilderness, and a flame has consumed all the trees of the field. Even the wild beasts long for you, because the streams of water have dried up and fire has devoured the pastures of the wilderness.”

Already the once robust organization is shriveling, evidenced by the shuttering of dozens of kingdom halls throughout America and Europe. We may expect the branches and factories to be mothballed too. All of the sheep will bear the punishment due to befall the drunken elders.

This is the timely message of the fascinating prophecy of Joel.