Since the election of Donald Trump, which the “experts” in the mainstream media declared to be impossible, a phase-shift has occurred. The discredited media are going after the alternative media —the so-called alt-right. Various blacklists have been produced of websites and bloggers who are deemed to be dangerous sources of Russian-linked propaganda. This phenomenon is occurring in America and in Europe as well.

This past week the EU Parliament passed a resolution equating RT and Sputnik with Daesh propaganda —implying they are fake news sources.

Reminiscent of the McCarthy-led communist witch hunt in the 1950s, the Washington Post is behind an effort in the U.S. to also malign various alternative news websites as outlets for Russian propaganda. On the list of “fake news” sites are the Drudge Report, antiwar.com, Ron Paul, Zero Hedge, Info Wars, and dozens of other popular websites that expose the globalist’s conspiracy.

The fact is, millions of people are tuning into alternative news sources and turning off the establishment-bought “experts.” For example, Russia Today has a far-wider YouTube viewership than the media flagship news sources like CNN, FOX, MSN, CBS, NBC, etc.

Humorously, in an admission of their biased coverage of the election, the NewYork Times sent a letter to subscribers apologizing for getting it so wrong, vowing to rededicate itself to real journalism.

In actuality, it is the mainstream media which is the source of fake news. An article on Global Research produced by Professor Michel Chossudovsky exposes several instances where BBC and CNN published deliberately faked news. The truth is, not only are mainstream news sources owned by Wall Street-aligned corporations, they are outlets for the CIA. 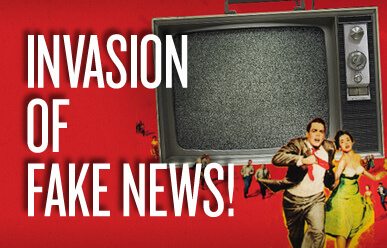 As an example of the impact of mainstream fake news, ask someone you know if they believe Russia invaded Crimea. I have done that very thing and people have responded in the affirmative. Where did they get that idea? They got it from the “news.”

But the truth is quite different. After the US-orchestrated coup toppled the elected president of Ukraine a puppet government was installed. Almost immediately the new government outlawed the Russian language in Ukraine. This would be like outlawing Spanish in the United States.

With the civil war raging in predominately Russian, eastern Ukraine, the citizens of Crimea held a referendum and 95% of the population voted to secede from Ukraine and for reunification with Russia. The fact is since 1873 Crimea was part of Russia and it was only ceded by the Soviets to Ukraine in 1954. Most of the citizens of Crimea are ethnic Russian.

But according to the Western media the referendum was illegitimate. (They don’t really believe in democracy) And the propaganda machine has spun it as if the Russian  army invaded Crimea, which is simply not true. There were no shots fired. No Molotov cocktails thrown. No one was killed or hurt.

The reason Russia and Putin are targeted is because Russia will not bend to the demands of the globalists, particularly the ongoing scheme to destroy Syria by London-backed terrorists. And the alternative news sites that publish information unsanctioned by the empire are now being targeted too. The truth is the enemy.

Of course, war propaganda is nothing new. There is a saying that the first casualty in every war is the truth. But the stakes now are much higher. That is because there is a greater war then merely what is taking place in the human realm. The real war is in the invisible realm. And all indications are that war is going to go hot, soon.

Ultimately, we may expect the so-called globalists, the London-based empire, to succeed in blowing up the present system, which is deemed a necessity in order to prevent the inevitable ascension of Russia and China to world dominance.

According to prophecy the last kingdom, which descends from Alexander’s, Grecian empire (which rules out Russia and China), will throw truth to the earth. The angel further said of him: “His power will become great, but not through his own power. He will bring ruin in an extraordinary way, and he will be successful and act effectively. He will bring mighty ones to ruin, also the people made up of the holy ones. And by his cunning he will use deception to succeed, and in his heart he will exalt himself; and during a time of security he will bring many to ruin. He will even stand up against the Prince of princes, but he will be broken without human hand.” —Daniel 8

We may assume that the deception at work now will ultimately succeed in overturning the capitalist, democratic system —ushering in a reign of tyranny that will crush all opposers, including Jehovah’s Witnesses.