How did Abraham “see” Jesus’ day?

How did Abraham “see” Jesus’ day?

Question: What did Jesus mean when he told the Jews at John 8:56: “Abraham your father rejoiced greatly at the prospect of seeing my day, and he saw it and rejoiced.” How did Abraham see Jesus’ day?

The Jews claimed that Abraham was their father. That is because they knew that Abraham was the genetic progenitor of the Israelites. (Although he himself was not a Jew Abraham’s great, great grandson, Judah, became the father of the tribe from which the Jews derived their name.)

Jesus, however, did not consider those particular Jews to be the children of Abraham. That is not to say they were not the fleshly descendants of Abraham, Issac and Jacob, but Jesus was speaking in spiritual terms, as the context reveals where Jesus said to the Jews: “If you were Abraham’s children, you would be doing the works of Abraham. But now you are seeking to kill me, a man who has told you the truth that I heard from God. Abraham did not do this. You are doing the works of your father.”

Jesus went on to reveal that their “father” was Satan, the Devil. The “works of Abraham” had to do with putting faith in God’s promise and accepting Jesus as the Promised One.

Remember, when Abraham was alive there was no Bible. However, the great Deluge and the confusion of mankind’s common language at Babel was undoubtedly still fresh in the collective memory of people living then. No doubt too, the original promise in Eden regarding the offspring of the woman was alive in the minds of a few godly persons as well. So, when God contacted him and ordered him to move to the land of Canaan and told Abraham he would make a great nation out of him, Abraham had some basis to believe that God was acting to further his purpose regarding the “seed.”

Faith was required, though, because both Abraham and Sarah were beyond child-bearing age. But Abraham believed that God would somehow provide him with offspring. As we know, God’s angels visited Abraham and Sarah and foretold that she would give birth. The next year Sarah did indeed give birth. So, Issac was the son of a promise —the same as Jesus. However, when Issac was grown God inexplicably ordered Abraham to subject his son to a sacrificial death. What a test of faith! How could all the nations obtain a blessing from Abraham’s offspring if Issac is killed before he had children? Again, Abraham reckoned that God would raise his son from the dead. A couple of thousand years later the apostle Paul explained that Abraham received Issac back from the dead in a figurative way, because, although God did not allow Abraham to go through with the sacrifice, he demonstrated that he would have. 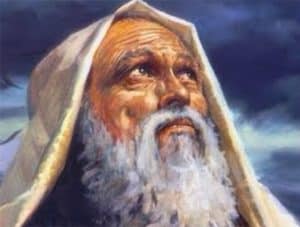 Now as regards the question, how did Abraham “see” Jesus’ day and rejoice? —because Abraham knew of God’s promise of a savior —a human offspring, and he knew that one of his descendants would be that special Promised One, Abraham participated in a prophetic drama by as good as offering up his only-begotten son in sacrifice.

Clearly, Issac prefigured the Son of God, who himself was miraculously born and who gave his life as a living sacrifice to God. Not coincidentally, the place where God ordered Abraham to conduct the sacrifice —Mount Moriah —is the place where Solomon built Jehovah’s temple some thousand years later. And, of course, Jesus was sacrificed on the very same location.

By his participating in the prophetic enactment, apparently, Abraham perceived certain spiritual realities in connection with the coming of the Promised One. In that way, he saw Jesus’ day and rejoiced.

Interestingly, after the Israelites came out of Egypt the people of the land of Canaan —the various tribes of the Canaanites, who were notoriously wicked —were practicing child sacrifice, which the Israelites even took up years later. Jehovah considered such to be detestable. However, when Abraham was trekking through the land four hundred years prior there is no mention of child sacrifice. It seems most probable that the demons induced the Canaanites to take up the horrific religious practice after Abraham attempted to offer up Issac as a way of mocking God and belittling the sacrifice God would make in connection with his Son.

Sounds about right via @activistmommy1

How on earth can anyone read even the slightest bit of Scripture and come away with the impression that one can be a Christian and a witch? Quite easi...

And just think, the plague hasn't even begun yet.

MANILA, Philippines (AP) — In a popular Catholic church in the Philippines, nearly half of the pews were empty for Sunday Mass. The few hundred wors...

I guess this helps even the score from the millions of Muslims the "Christians" slaughtered going back to the first crusade.

It's the latest attack against Christians by Muslim extremists...

Have you cracked a smile and laughed today? Here...

.@b_ru_ru's adorable cats ring a bell every time they want a treat.