The Hour of Darkness Approaches

The Hour of Darkness Approaches

Immediately after Jesus was baptized in the Jordan River and anointed by God as the promised Messiah he was promptly led by the holy spirit into the wilderness in order to be tempted by the Devil.

But that was just the beginning. After having failed to tempt Jesus into an act of disloyalty to Jehovah the gospel writer Luke noted that the Devil concluded the temptation, only “until another convenient time.” Some time later Jesus exposed his tempter as the wicked ruler of the world, the father of the lie and the original manslayer – charging his fellow Jews as being those desirous of doing the will of the wicked one.

On the night he was arrested in the Garden of Gethsemane, Jesus told his captors that it was their hour and the authority of darkness  – meaning that Jehovah had removed his protection from Christ in order to allow the wicked one to test him to the limit. If you recall, on several occasions during his ministry the murderous Jews tried to kill Jesus, but could not. On other occasions the leaders wanted to have Christ destroyed but they were in fear of those who accepted him as a man of God. But all impediments to his destruction were swept away on that fateful Passover.

Jesus forewarned Peter that Satan had also demanded to have them, the apostles, in order to sift them as wheat, and by extension, everyone who has been called into the kingdom of Christ. That would include Jehovah’s Witnesses today, would it not?

Although prior to his torturous death Jesus stated that he had beheld Satan already fallen from heaven just like lightening, Jesus did not mean to imply that Satan had already been deposed back then or that he is no longer the ruler of this evil system we presently live under. Jesus simply meant that the kingdom of God, which then powerfully manifested itself through the powers given to Christ and his followers, was certain to eventually, completely destroy the authority of darkness.

That the Devil was still very much in power is evident from Paul’s later writings regarding Satan being the god of this world who blinds the minds of the unbelievers. And, of course, the book of Revelation, a revelation of what is to occur during the conclusion of this present system, reveals that the demons and their wicked king are not evicted from heaven until the actual commencement of the reign of Christ. The overthrow of the wicked angels in heaven and their banishment to this tiny troubled sphere for a “short period of time” will result in the worst catastrophe this world has ever experienced.

Jesus said of that bleak time that the sun will turn into darkness, the moon will not give its light and the very stars will fall from the heavens – an hour of darkness indeed!

In advance of that earth-shattering event the Devil has been allowed to rig his system to collapse into chaos at the moment he is violently thrown down from heaven by the newly enthroned Michael the archangel.

The currently tottering global financial system is the most likely tripwire to cause an implosion that will bring civilization to its knees. The vast arsenal of nuclear and various and sundry other weapons of mass destruction, countless terrorist cells, governmental spying apparatus and pre-built concentration camps, are already in place for the Devil to bring the foretold “hour of test” upon the world.

After his ouster from heaven, the maddened Devil will then be allowed an interval of time equivalent to the duration of the earthly ministry of Christ, during which time he will use his revived earthly political beast to terrorize the world into total submission, with the express intent of causing the chosen ones to betray their Lord. Did not Jesus foretell that men would become faint with fright in dread and foreboding during the dark night of the conclusion and that no flesh would even survive the ordeal unless God would cut the tribulation short?

As an indication of the change that will take place in the political system, the 13th chapter of Revelation depicts a two-horned lamb that emerges from the bowels of the earth, as if returning from the dead. And which then begins to speak as a dragon in ordering mankind to create and worship an image of the resurrected beast. (The dragon is Satan the Devil according to Revelation 12:9)

Notably, the lamb is also a symbol of Jesus Christ. The two-horned lamb out of the earth symbolizes the Anglo-American duo after they recover from their now-impending crash. The lamb-like beast is an appropriate representation since both nations have ostensibly been “Christian” nations, espousing freedom and democracy and Christian values and are locked in a Special Relationship alliance; hence, two horns. Its speaking as a dragon denotes the tyrannical nature the beast will assume during the symbolic one-hour the eighth king is allowed to terrorize the world.

Knowing the great test that will come upon his disciples during the concluding hour of the authority of darkness, Jesus forewarned them to not become terrified or allow themselves to be deceived. Underscoring the criticalness of the time of trouble, Jesus said that the deception Satan would be allowed to work upon the world will be so effective that it could conceivably deceive the chosen ones – adding, “if that were possible.” 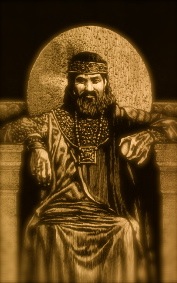 Consider, for example, King Solomon. He was, of course, the son of King David, a man whom Jehovah noted was a man after his own heart. And because of Solomon’s humble request for the wisdom to be able to guide God’s people, God graciously gave him wisdom and riches surpassing that of any man prior to him. Solomon had the privilege of building Jehovah’s temple and even contributed a significant portion to the collection of inspired scriptures.

In spite of his great wisdom, though, Solomon became apostate and brought ruin upon Israel by introducing the worship of numerous false gods in order to please his multitude of idol-worshipping foreign wives.

Most kings of Israel and Judah consequently promoted or tolerated idolatry and apostasy.

Satan was also successful in infiltrating Christ’s original congregation. Even while Jesus was with his disciples the apostle named Judas Iscariot became a willing pawn of the Devil. During Paul’s ministry to the nations, the apostle was compelled to expose the leading men of the Corinthian congregation as mere agents of Satan who had slyly disguised themselves as ministers of righteousness.  Eventually, the demons took complete control of Christianity when the Roman emperor, Constantine, inserted himself as its leader.

Blatant pagan teachings, idolatry, the bloodshed and plunder of the Crusades, the pogroms against the Jews and endless warmongering, political involvement, Bible burnings and murders of those who attempted to teach the truth, stand as undeniable evidence of the Devil’s influence over the churches.

In stark contrast to Christendom, the Watchtower Society has championed the truth; and the evidence is clearly discernable for all who wish to accept it that Jehovah’s Witnesses practice and preach the true faith, as revealed in the Scriptures.

“Surely they will keep saying what is according to this statement that will have no light of dawn. And each one will certainly pass through the land hard pressed and hungry; and it must occur that because he is hungry and has made himself feel indignant, he will actually call down evil upon his king and upon his God and will certainly peer upward. And to the earth he will look, and, lo! distress and darkness, obscurity, hard times and gloominess with no brightness.” – Isaiah 8:-20-22

That being said, the Watchtower Society has perpetrated one of the biggest hoaxes in history – the hoax that Christ invisibly returned in 1914.  In truth, the Watchtower’s cherished 1914 invisible parousia doctrine bears all the earmarks of the “operation of error” that Paul foretold God would permit to go to those who know the truth, in order to test their love of the truth.

The operation of error is not in reference to the pagan teachings of Christendom, as the Watchtower teaches. According to the inspired apostle, Satan would be allowed to set up a fake parousia, using an earthly man of lawlessness ensconced within the spiritual temple of God to make apostolic pronouncements and declarations that the presence had begun and the day of Jehovah was here – using all his wicked powers to make it appear as if the prophecies had been fulfilled. This would occur as an immediate prelude to the actual Parousia and day of Jehovah.

The great sifting that was imposed upon the apostles was effected in no small measure due to the erroneous assumptions the Jews held regarding the Messiah. In other words, God allowed an operation of error in the first century. (Not coincidentally, Jesus said Judas was “the son of destruction. The man of lawlessness is also called “the son of destruction.)

The error presently in operation upon Jehovah’s Witnesses will result in a great test of faith when the hour of the authority of the darkness arrives.

“We keep hoping for light, but, look! darkness; for brightness, but in continuous gloom we kept walking. We keep groping for the wall just like blind men, and like those without eyes we keep groping. We have stumbled at high noon just as in evening darkness.” – Isaiah 59:9-10

I'm thinking about moving back to Texas. 😁
https://www.nbcnews.com/news/us-news/gov-greg-abbott-lift-texas-mask-mandate-open-state-100-n1259329

This sounds about right 😁

The Folly of Lockdowns Exposed in One Simple Graph

Jeffrey Tucker and his colleagues at the American Institute of Economic Research have been working overtime exposing ...

Maybe it is not a pandemic. Perhaps an epidemic.

Is This Why "New COVID Cases" Are Crashing?

The number of “new cases” reported is tumbling in many countries around the world, and has been for ov...

I guess it is appropriate, seeing that Eve got us into this mess way back when. Feminisim may achieve the ultimate goal of equality when a woman launches nuclear war and brings down the curtain on civilization

“Vesting one person with this authority entails real risks,” states the 2-page letter from an effort front...

Hot-diggedy-dog, the war machine is back!

‘The war machine is back’: Biden reminded of previous criticism of Trump’s ‘escalation’ in Syria after he orders new strike — RT USA News

President Joe Biden drew praise from hawks and accusations of hypocrisy from critics after he authorized a reprisal ...