The Hour of Judgment – Has It Arrived?

The Hour of Judgment – Has It Arrived?

Fear God and give him glory, because the hour of judgment by him has arrived.—Rev. 14:7.

Now is the time to declare that message. We must warn our neighbors to get out of Babylon the Great, so that they do not “receive part of her plagues.”  The “other sheep” join anointed Christians in begging those who are alienated from God to “become reconciled” to him. We are convinced that “the hour of judgment” has, indeed, arrived. We also have faith that Jehovah has not exaggerated the urgency of our preaching and disciple-making work. In vision, the apostle John “saw four angels standing on the four corners of the earth, holding tight the four winds of the earth.” By faith, do you see those angels poised to release the destructive winds of the great tribulation on this world? If you see those angels with your eyes of faith, you will be able to share the good news with confidence.

If there is anything that proves Jehovah’s Witnesses have the truth, it is the persistent, unshakable falsehood that is embedded in virtually everything the Watchtower teaches. That interminable lie is, of course, the 1914 fallacy —the delusion that Christ began ruling the world over 100 years ago.

It matters little to the Keepers of the lie how many contradictions they have to impose upon the believers. The all-important thing is that the delusion is maintained. But how can a lie identify the true faith?

Paul explained that “God lets a deluding influence mislead them so that they may come to believe the lie.” And what is the lie, exactly? It is not the trinity or any of the lies commonly taught by the churches. It has to do with a false announcement regarding the return of Christ. Through various mediums, whether via seemingly inspired messages and official letters and verbal messages, the message emanating from a man of lawlessness heralds the presence of Christ and proclaims that the day of Jehovah is here.

The very fact that Paul specifically forewarned the Thessalonians not to be unduly alarmed or shaken from their reason indicates that the delusion is directed at them and by extension to all those who have been called by God. That is why Paul also stated: “Do you not remember that when I was still with you, I used to tell you these things?” More to the point, the deluding influence would persist up until the actual manifestation of Christ destroys the source of the lie.

The reason the delusion is so powerful is because the source of the misleading influence is regarded by the deluded as being the spokesman of God —Jehovah’s earthly mouthpiece. To question any of his utterances is regarded as the worst sort of blasphemy. That is why Paul specifically warned the brothers not to believe inspired statements or letters as if authored by the apostles —in other words, messages emanating from a source reputedly in communication with God.

Now as regards the daily text, a casual reader may easily form the impression that the Watchtower is implying that the hour of judgment is near to begin. Indeed, that is what the WT wishes the reader to believe, at least in this context.

However, here is where the deluding influence is most apparent: In reality, the Watchtower actually teaches that the hour of judgment has already begun. If any of Jehovah’s Witnesses doubt that here are a few quotes taken from the most recent Watchtower articles available online.

Angels are involved in some of the remarkable things that occur in “the Lord’s day.” These include the birth of the Kingdom in 1914 and the hurling of Satan and his demons from heaven by “Michael and his angels.” The apostle John saw an “angel flying in midheaven, and he had everlasting good news to declare as glad tidings to those who dwell on the earth.” The angel declared: “Fear God and give him glory, because the hour of the judgment by him has arrived, and so worship the One who made the heaven and the earth and sea and fountains of waters.” Jehovah’s servants are thus assured of angelic backing as they preach the good news of the established Kingdom despite the Devil’s vicious opposition. —WT 09-5/15, paragraph 17

True, the preaching work plays a vital role in the salvation of honesthearted ones, but it also serves other important purposes. The Christian ministry gives us an opportunity to demonstrate our love for Jehovah. It enables us to avoid bloodguilt. It warns the ungodly that “the hour of the judgment by [God] has arrived.” —WT 08-7/15 paragraph 16

As we keep on the watch, what can we expect? The book of Revelation outlines progressive steps in the fulfillment of God’s purpose. Acting on what it says is vital if we are to prove ourselves ready. The prophecy vividly describes events that would occur in “the Lord’s day,” which began when Christ was enthroned in heaven in 1914. Revelation alerts us to an angel who has been entrusted with “everlasting good news to declare.” He proclaims in a loud voice: “Fear God and give him glory, because the hour of the judgment by him has arrived.” That “hour” of judgment is a brief period; it includes both the pronouncement and the execution of the judgments that are depicted in that prophecy. We are now living in that period. —WT 05-10/1 paragraph 14

Obviously, a symbolic hour is a relatively short period of time. For example, the 8th king is to rule for merely one hour. But of course, the Keepers of the lie are adept at double-speak and according to the Watchtower, an hour can apparently stretch over more than a century, which renders the symbolism meaningless. No matter, that is easily fixed. Although the hour of judgment has supposedly already arrived, the judgment has not been carried out yet – Presto! discrepancy patched over. That same sort of doublespeak is employed to convince Jehovah’s Witnesses that although Christ has already come, he is coming again; although Jesus sat down on his throne in 1914, he is going to sit down on another throne in the future in order to judge the sheep and goats; although the judgment of the house of God began in 1914, it is ongoing. And on and on and on it goes, for now anyway.

But the falsity of the Watchtower’s claim that the hour of the judgment has arrived can be discerned if a person is willing and capable of honestly reasoning on the facts. According to the 14th chapter of Revelation the hour of the judgment occurs after the beast is slain and miraculously revives —crawling out of the symbolic abyss of death. The resurrection of the beast commences the judgment of the world of mankind. Those who follow the beast with admiration and who receive its symbolic triple-six marking are judged worthy of everlasting death —their names not being written down in the book of life. That is why Revelation 14:9-12 states: “Another angel, a third, followed them, saying in a loud voice: “If anyone worships the wild beast and its image and receives a mark on his forehead or on his hand, he will also drink of the wine of the anger of God that is poured out undiluted into the cup of His wrath, and he will be tormented with fire and sulfur in the sight of the holy angels and in the sight of the Lamb. And the smoke of their torment ascends forever and ever, and day and night they have no rest, those who worship the wild beast and its image and whoever receives the mark of its name. Here is where it calls for endurance on the part of the holy ones, those who keep the commandments of God and hold fast to the faith of Jesus.””

Unfortunately, Jehovah’s Witnesses are scarcely even aware that the Watchtower teaches such nonsense. But ask one, or better yet, ask an elder or circuit overseer if people are already receiving the mark of the beast. They can only answer in the affirmative since that is what The Slave teaches. Then you might ask them why Jehovah’s Witnesses ought to even bother to preach a message of salvation to a world of people who have already been irreversibly consigned to perpetual death? (Take note of the raised eyebrow response or blank stare.)

Of course, it is not possible to reason with them now. Such is the nature of the deluding influence that presently prevails. But the outbreak of global war and the collapse of the present system of things will serve as a resounding, much-needed wake-up call in advance of the angelic herald: “Fear God and give him glory, because the hour of judgment by him has arrived…” 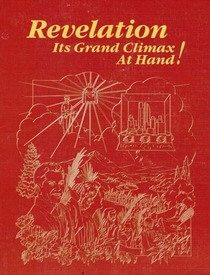 Yes, the world is a difficult place for those who do not have the mark of the wild beast. It is an outstanding demonstration of Jehovah’s power and blessing that the remaining ones of the seed of the woman, as well as more than six million of the great crowd, are keeping integrity despite all the pressures to break God’s laws. Unitedly, throughout the earth, may all of us continue to magnify Jehovah and his righteous ways, as we refuse to receive the mark of the wild beast – Revelation Grand Climax pp 198

Those who have the mark of the wild beast will also be destroyed completely, as if by fire. As the prophecy later reveals, their dead bodies will be left unburied for animals and birds to eat. – pp 210

So they must be those from among the 144,000 who live on earth during the last days. As a group, they do indeed come off victorious. For almost 90 years since 1919, they have refused to accept the mark of the wild beast or look to its image as man’s only hope for peace… – pp 217

The contents of this bowl strongly emphasize the choice that lies before humans. They must suffer either the world’s disapproval or Jehovah’s indignation. Mankind has been put under compulsion to accept the mark of the wild beast, with the intent that “nobody might be able to buy or sell except a person having the mark, the name of the wild beast or the number of its name.” But there is a price to pay for this! Jehovah regards those who accept the mark as being stricken with “a hurtful and malignant ulcer.” Since 1922 they have been marked in public as having rejected the living God. – pp. 223