Their horses are swifter than leopards

Their horses are swifter than leopards

How long must I ask for help from violence, but you do not intervene? —Hab. 1:2.

Habakkuk lived during a very difficult and challenging time. He was deeply saddened because he was surrounded by wicked, violent people. When would their wickedness end? Why did Jehovah take so long before acting? All Habakkuk saw was injustice and oppression practiced by his own countrymen. He felt helpless. So in the midst of this dark period, he called on Jehovah to intervene. Habakkuk may have started to imagine that Jehovah was not concerned. It seemed that God would not act soon enough. Can you identify with the feelings of this dear servant of God? Had Habakkuk lost trust in Jehovah? Did he fail to maintain his faith in God’s promises? By no means! The mere fact that he entrusted his problems and concerns to Jehovah and not to humans shows that he had not given up in despair. He was obviously troubled because he could not understand God’s timing or the reason why Jehovah allowed him to be in such a painful situation. w18.11 14 ¶4-5

I read the entire article from which the Daily Text was drawn. The information is ostensibly based on the prophecy of Habakkuk. It is astonishing to me that the Watchtower can say so much and not explain anything. It is all apart of an ongoing trend to de-emphasize and water down the prophets, becoming most notable beginning with the publication of a commentary on Jeremiah in 2010.

It would appear that the Governing Body wishes to portray itself as a modern-day prophet, God’s appointed watchman, without actually having to stay on the watch or understand prophecy. I suspect, too, that the reliance upon “helpers” to the GB in recent years has something to do with the increasing infantilization of the information being presented.

The article rightly points out that Habakkuk, who was living in Judah immediately prior to the Babylonian holocaust, was distressed because of the prevalence of violence, oppression, and injustice among his fellow Jews. The Watchtower implies, though, that a modern parallel only exists in the world in general. The article glosses over the fact that the deplorable moral environment Habakkuk was lamenting existed among God’s people —Jerusalem being the place where Jehovah caused his name to reside in ancient times.

After Habakkuk expressed his distress Jehovah responded with His solution —introducing us to the Chaldean. Of him, Jehovah states: “Look among the nations and pay attention! Stare in amazement and be astounded; for something will happen in your days that you will not believe even if it is told to you. For here I am raising up the Chaldeans, the ruthless and impetuous nation.”

Even before I presented copies of Jehovah Himself Has Become King to the Governing Body and various department heads and branch overseers in 2005, I submitted a number of essays to the Watchtower based upon the prophecies of Joel and Habakkuk. Obviously, they do not believe that there is such a thing as a modern counterpart to the ruthless Chaldean that will subjugate and tyrannize the world.

Well, that is not exactly true. I correct myself. In the chapter on Habakkuk I cited the Watchtower’s exposition of Habakkuk and the fact they claim that the “nation” Jehovah has appointed to execute punishment has already been manifest in the “Fascist, Nazi, Communist, or even so-called democratic” political powers —and even the petty swindlers and drug dealers. In other words, the world in general is the Chaldean of the vision. Except the seers of Bethel have no concept that the vision for the appointed time —the vision of Habakkuk that is “rushing toward its end, and it will not lie” —has any antitypical fulfillment in the future, even though they acknowledge that it is proper to stay in expectation of it, contradictorily they claim the “Chaldean” is here already.

In all of the Watchtower’s writings over the past century they have never recognized the fierce and rapacious Chaldeans, otherwise known as Babylon, as foreshadowing the eighth king. Worse, the Watchtower claims the eighth king came into existence almost a century ago in the form of the long-since defunct League of Nations. No reason to stay in expectation of something that has already come and gone and been forgotten. Just another demonstration of the fact that “Jehovah has poured a spirit of deep sleep on you; He has closed your eyes, the prophets, and he has covered your heads, the visionaries.”

Meanwhile, the conspiracy to destroy the nations is moving on apace. “Even if it should delay, keep in expectation of it! For it will without fail come true. It will not be late!”

At the present moment, the nations are experiencing the initial assault by the onrushing “Chaldean.” Through their deep state apparatus, there has been an ongoing coup against the president of the United States, who has expressed his determination to undo the globalist’s system that has already been put in place. The American president is the first president in a half-century who has not started a war. And he has the audacity to withdraw from the conflicts undertaken by his predecessors as part of London’s perpetual war policy since orchestrating the 9-11 attack 19 years ago.

As an example of the influence of this imperial complex, private central banks and hedge funds dominate the financial system and control credit. Since 1971 the invisible empire has gradually impoverished the once-great nation. Coinciding with the release of the Coronavirus the central banks have embarked on their end-game, the final phase of destruction, by unleashing a torrent of money as part of the scheme to ensnare the nations in a web of unplayable debt. Because of cheap money the so-called zombie corporations —bankrupt in normal times —can continually sell debt in the form of junk bonds and purchase their own stocks to enrich shareholders. However, that game can only continue in a low-interest-rate environment. Same with sovereign debt.

In the past empires looted and plundered by means of huge armies. Now, though, entire nations can be dispossessed by inducing them to engorge themselves with debt. At a point in the future when the vision comes to life we may expect the banks to jack up interest rates —springing the debt trap —thereby foreclosing on individual debtors, as well as corporations and all forms of government from city, state, and more especially national institutions.

Of the rapacious “Chaldean” Jehovah goes on to say: “The ruthless and impetuous nation. They sweep through vast stretches of the earth to seize homes not theirs.” —Habakkuk 1:6

The vision continues: “Their horses are swifter than leopards, and they are fiercer than wolves in the night. Their warhorses gallop forward; their horses come from far away. They swoop down like the eagle rushing to feed.” 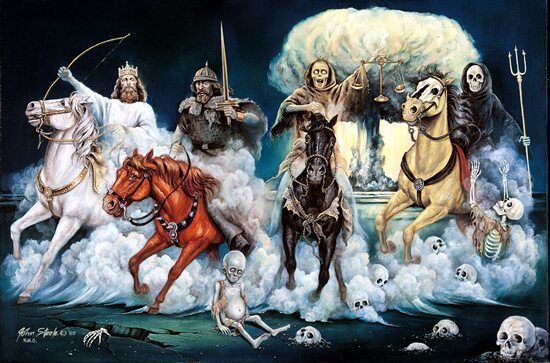 Armies no longer employ galloping warhorses. Modern weapons defy the imagination. Nevertheless, the fearless steeds were the ultimate weapon for centuries and for that reason horses symbolize weaponry in all of its sundry forms, including biological weapons, such as Coronavirus. That is why Revelation symbolizes the coming wars, famines and pestilential death as fiery-colored and deathly pale-horses charging across the world.

Since the vision of Habakkuk is for the appointed time —the appointed time for the coming of Christ  —the Chaldean’s warhorses must correspond to the death-bringing cavalry unleashed by the opening of the seals of the scroll of Revelation —the scrolls containing God’s judgments. That is something Jehovah’s Witnesses would surely scoff at in disbelief since the Watchtower has deluded them into believing that all of that is in the past.

Concerning the day of his coming Christ foretold that there would be anguish among the nations not knowing the way out. Habakkuk confirms that his coming will result in pestilence and panic: “His brightness was like the light. Two rays flashed from his hand, Where his strength was hidden. Before him went pestilence, and burning fever followed at his feet. He stood still and shook the earth. With a look, he made nations leap. The eternal mountains were smashed, and the ancient hills bowed down. The paths of long ago are his.” — Habakkuk 3:4-6