The Harvest is a Conclusion of a System

The Harvest is a Conclusion of a System

QUESTION: With 8 million JW’s being so misguided, how are we to explain/understand/apply Jesus’ parting words at Matt. 28:20 ? Was the “conclusion” he was referring to including or only the destruction in 70ce? Being “with you all the days…” -Who has he been “with” for all what days? “All” means all, or does it? Amazing how one small verse can open up a whole can of worms/questions…

The phrase “the conclusion of the system of things” originally applied to the end of the Jewish system, which history testifies experienced a fiery conclusion in the spring of 70C.E., when the Roman legions razed Jerusalem to the ground, slaughtering a millions Jews who sojourned to the doomed holy city to celebrate the Passover.

Preceding that horrific destruction in 66C.E. the Roman armies came against Jerusalem to put down a rebellion. Under General Gallus the city was completely encircled and the wall of the temple undermined, as the Jewish zealots had holed up in the temple; but for some unknown reason the Romans withdrew. That was the signal for believers to flee the city and Judea —as Jesus had commanded. That began the concluding period, which proved to be about three and one half years.

However, Jesus clearly intended to speak to another conclusion; one on a much grander scale. That is evident from the things Jesus said would occur during the conclusion; namely, a great tribulation that would come upon the entire inhabited earth, not just tiny little Jerusalem —a tribulation so severe that it would require divine intervention to prevent the complete extermination of all mankind.

Jesus gave his assurance —that he would be with his disciples all the days —right after he gave them orders to “Go, therefore, and make disciples of people of all the nations, baptizing them in the name of the Father and of the Son and of the holy spirit, teaching them to observe all the things I have commanded you.”

So, the “who” applies primarily to anointed Christians who serve as ambassadors substituting for Christ. They are the ones who are obligated to preach and teach. Paul said: ‘Woe to me if I do not preach the good news.’ In that regard the 12th chapter of Revelation identifies the remaining ones of the offspring of the woman as those “who observe the commandments of God and have the work of bearing witness concerning Jesus.”

Of course, Christianity did not end with the destruction of the Jewish system. But over time Christianity was infiltrated by wicked men and the faith was corrupted. Ultimately, the Roman Empire seized control over the bishops of the church and gradually infused pagan practices and beliefs with “Christianity”; hence, Christendom was born. For centuries —all during the period appropriately called the Dark Ages, there was no discernible anointed persons who gave witness to Jesus. The Catholic and Orthodox churches ruled over their subjects with an iron fist.

There were, though, a few groups that popped up here and there. The Waldenses are the most notable. The movement was founded in the later part of the 12 century in southern France and was distinguished by the public preaching of its male members. Although suffering horribly under the hand of the popes of Rome eventually the Waldenses were absorbed into protestantism and ceased preaching. (Watchtower article on the Waldenses.)

Were some of the Waldenses anointed? It certainly seems so. They took Jesus’ commands seriously and defied the Catholic Church. Some of them were executed by the religious authorities, just like some of the first century Christians had been. They even translated a Bible into the common language so they could teach people God’s word. It appears that Jesus was certainly with them.

The Lollards were another group. They were the followers of the Englishman John Wycliffe, one of the original translators of the Scriptures into English. They too were characterized by their public ministry and were persecuted and burned at the stake for daring to follow Jesus’ command to go preach and teach. More than likely the intrepid Wycliffe and some of his followers, as well as the translator William Tyndale who came later, were anointed Christians. But, alas, the Lollards faded away too. 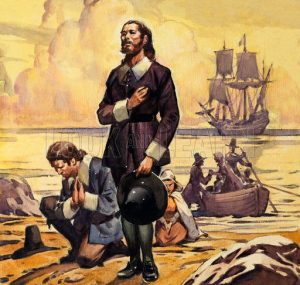 Then came the Pilgrims. They were devout believers who rejected the authority of the church of England, which was merely a national franchise of the Catholic Church. Because of persecution entire congregations of Pilgrims packed up and left England. Some of them first moved across the Channel to Holland, but in time many boarded little boats and set sail for America. It is most interesting that America was peopled and founded by earnest Bible believers. True, there was much they did not understand. But they were the groundbreakers and their progeny would be given greater freedom and knowledge.

Because of the terrible oppression in Europe the founders of America wrote up a Bill of Rights —sort of the 10 commandments of the Constitution —the first of which protects people of faith from being persecuted and oppressed and guarantees freedom of speech, freedom of the press and freedom of assembly. Coupled with the availability of the Bible due to the proliferation of the technology of the printing press, America was a most fertile field just waiting to be sown with Kingdom seed. As if right on cue, after the American Civil War Charles Russell appeared on the scene and initiated what has become the most extensive preaching and teaching campaign in the history of the world. The seeds of truth quickly germinated into an identifiable congregation of anointed persons who were dedicated to the work Jesus had assigned.

From the seedbed started in America the work would spread to the four corners of the earth —this in spite of rabid persecution, two world wars and a Great Depression and now all the distractions of a money-worshipping, pleasure-maddened world. Jesus has been true to his word, being with those who obey him as their king.

But what about the conclusion?

Jesus spoke about the conclusion of the system of things on more than one occasion. In a series of illustrations recorded in the 13th chapter of Matthew Jesus spoke about a field of wheat that was over-sown with weeds by an enemy. Jesus explained his story, relating how the wheat are the true sons of the Kingdom, but the weeds are phonies who were planted by the Devil. Both grow together until the harvest. During the harvest the angelic reapers collect the weeds out of the field, tie them in bundles and pitch them into the fire. Afterwards the wheat are gathered into the symbolic storehouse. As regards the gathered wheat Christ said they will then shine as brightly as the sun in the Kingdom of the Father. Jesus further added, the harvest is a conclusion of a system.

Back in 2005 it was first presented in the book Jehovah Himself Has Become King, in a chapter called The Harvest (2010 version), that the gathering of the sons of the Kingdom has not taken place. The harvest, or the conclusion of the system, is not the the beginning of another period of planting and growth, it is the end of Christianity.  Just as the Jewish system fulfilled its purpose by producing the Messiah and a relatively few receptive followers who would be transitioned into a new nation, so too Christianity will fulfill its intended purpose to produce 144,000 sons of the Kingdom, along with an innumerable great crowd —symbolized in Christ’s related parable of the good and bad fishes in the dragnet, which is also fulfilled during the conclusion of the system.

According to Jesus, when the angels are dispatched to begin the harvest they will uproot all persons doing lawlessness and all things that cause stumbling. Are we to believe that the angels removed lawless persons from Christendom? Or are there no stumbling blocks among Jehovah’s Witnesses? Such suggestions are equally ludicrous.

The apostle Paul forewarned of the presence of a man of lawlessness who would exist among Christ’s congregation —even claiming top spot in the spiritual temple —all the way up to the time the manifestation of Christ brings him to naught. Up until then, though, the man of lawlessness is permitted to wield a deluding influence, which, ironically is manifested in the delusion among Jehovah’s Witnesses that the harvest began in 1914 and that the man of lawlessness is the clergy and has no influence over true Christians. Jehovah allows the delusion in order to serve as a test of our love of the truth once the conclusion actually commences.

With the aforementioned in mind, now reconsider the words of Christ: “look! I am with you all the days until the conclusion of the system of things.” Clearly, something changes in the relationship between Jesus and his disciples during the conclusion. What is it? If Jesus is with his followers before the conclusion we should expect something different, something more intimate. But according to what is before us there is no discernible difference in the way Christ dealt with the Bible Students up to 1913 and afterwards.

As Jehovah’s Witnesses know, the Greek word parousia literally means  coming alongside. Surely, Jesus coming alongside the anointed sons of  God is orders of magnitude more profound than his merely being with them all the days up until the conclusion. Yet, again, there is nothing in the 104 years of experience among the Bible Students and Jehovah’s Witnesses to suggest that Christ has come alongside anyone.

Although the Governing Body of the Watchtower have resolutely ruled out a future world war and the unfolding of all the other things Christ foretold, such as pandemics and widespread food shortages, they are laboring under a delusion. Those who are aware of what is actually happening in the world can see that the nations are preparing for war —a war that is certain to far surpass the devastation of all other wars. In some sense the war has already begun. Although at present the war is being prosecuted by proxy, more and more the nuclear powers are shooting at one another directly. Keep in mind, the nuclear powers have never engaged in direct warfare, ever.

Perhaps the most prominent misunderstanding among Jehovah’s Witnesses that prevents them from seeing through the 1914 delusion is that Jesus said the good news will be preached throughout the world and then the end will come. But was Jesus talking about the absolute end of Satan’s system? What other end could there be? How about the end of the preaching? The end of the teaching and disciple-making work Jesus assigned his followers to do up until the conclusion?

The conclusion of the system will be an entirely different phase of Jehovah’s purpose.