Look! I have forewarned you

Look! I have forewarned you

Satan is at war with the anointed remnant and the “other sheep.” The Devil’s goal is to devour as many of Jehovah’s servants as he can in the short time that he has left. Can we win our fight against Satan? Yes! The Bible says: “Oppose the Devil, and he will flee from you.” Many scoff at the idea that Satan even exists. To them, Satan and the demons are fictional characters of novels, horror movies, and video games. Such people feel that no intelligent person believes in wicked spirits. Now, do you think that it bothers Satan that he and his invisible cohorts have been relegated to the world of folklore? That is not likely! After all, it is easy for Satan to blind the minds of those who doubt that he exists. Promoting the idea that spirits do not exist is one of the many ways that Satan uses to mislead people.

Many of Jehovah’s Witnesses scoff at the idea that Satan has not been cast out of heaven. When presented with information concerning the falsity of the Watchtower’s 1914 end times scenario they reject it out of hand, imagining the messenger is an apostate.

The letter Paul wrote to the brothers in Thessalonica, urging the brothers not to become alarmed or shaken from their reason regarding authoritative announcements and letters intended to be as though authored by the apostles, claiming that the presence of Christ has begun and the day of Jehovah is here, has no relevance for them. It is simply beyond their capacity to comprehend that the Devil could be so clever, cunning and powerful, so as to fabricate a false parousia. While believing that Satan is at war with them Jehovah’s Witnesses have no inkling they have been brought under a deluding influence by the very institution they regard as the source of all truth.

To illustrate the Watchtower’s deceptive influence, consider the article in the December 15th, 2013, Watchtower Magazine, where it is stated in paragraph five regarding Paul’s letter to the Thessalonians:

What is now chapter 2 of this letter reveals that some in that congregation had become “excited” about Jehovah’s day to the point that they believed that its arrival was then imminent.

The Watchtower implies that Paul’s warning only had relevance for Christians living 2,000 years ago. And incredibly, Jehovah’s Witnesses are oblivious to the fact that since its inception the Watchtower has proclaimed that the parousia has begun and the day of Jehovah is here –exactly as the apostle forewarned. In fact, for over a half-century the Watchtower claimed that the day of Jehovah began in 1914. Not only that, just as Paul forewarned that there would be letters circulating among the brothers as though emanating from the apostles themselves, the Governing Body of Jehovah’s Witnesses has cleverly elevated themselves to the status of the original apostles.

Most noteworthy, Paul revealed that the source of the deluding influence is a man of lawlessness who will ultimately exalt himself as a god and sit down in the spiritual temple of Jehovah God, which is to say in Christ’s congregation.

Regarding the  man of lawlessness, Paul referred to him as “the son of destruction.” That designation is very significant since at John 17:12 Jesus used that very same expression in connection with treacherous Judas, who at that very moment was leading the authorities to Jesus as he prayed in the garden of Gethsemane. Since Judas was one of the 12 and was with Jesus throughout his entire ministry and was present at the last Passover Jesus observed with his apostles, Paul’s inspired designation of the man of lawlessness as the “son of destruction” surely signifies that he is a composite group of men who from all outward appearances are respected men of God —even apostles.

In order to empower the man of lawlessness and cloak him with apostolic authority, Satan employs all his deceptive powers. Paul explained: “The lawless one’s presence is by the operation of Satan with every powerful work and lying signs and wonders and every unrighteous deception for those who are perishing, as a retribution because they did not accept the love of the truth in order that they might be saved.” —2 Thessalonians 2:9-10

One aspect of the deluding influence is the notion that the man of lawlessness is the clergy. However, the same 2013 Watchtower makes the following statement:

To set matters straight, Paul under inspiration explained that a great apostasy and “the man of lawlessness” were to appear before Jehovah’s day. Thereafter, in his due time, the Lord Jesus would “bring to nothing” all those who had been deceived. The apostle pinpointed the reason for this judgment on them; it was that “they did not accept the love of the truth.” We do well to ask ourselves: ‘How much do I love the truth? Do I keep up-to-date with our present understanding as set out in the pages of this magazine and other Bible-based publications provided for the worldwide congregation of God’s people?’

According to the Watchtower the man of lawlessness and the apostasy that must come first, immediately prior to the parousia, took place over 1,600 years ago. And still, after hundreds of years, Christ has not manifested himself. Most noteworthy, the citation above equates the truth with “our present understanding as set out” by the Watchtower. To illustrate the deception of this comment consider the fact that from its very first publication the Watchtower claimed the parousia had begun in 1874. For over half a century that was the “present understanding.” Then 1874 was scrapped and 1914 became “our present understanding.” What this means is that for over 50 years the Watchtower promoted a fraud, a lie, in the name of truth; except it was never admitted to be a lie or delusion. Now it is simply old truth. No wonder Paul sternly warned the brothers not to believe the false proclamations that the parousia has begun!

Although the Bible Students that believed the lie that the parousia had begun in 1874 have all passed away, what about the millions of Jehovah’s Witnesses now who believe the 1914 hoax? It poses a potentially lethal stumbling block for them. How so? Because the Watchtower’s “present understanding” regarding vital matters pertaining to the parousia will always be a lie. That is because the Watchtower will not accept Christ when he comes. That is, in fact, why Jehovah allows them to get to believing the lie —“the lie” being, that Christ has already come, at least that is the “present understanding.” So, when he does actually come everyone will have to demonstrate their faith apart from being tutored by the Watchtower. Those who do not love the truth will follow the son of destruction into destruction.

To emphasize the point —the point being: if Jehovah’s Witnesses are the true faith the clergy could not possibly be the manifestation of the man of lawlessness —the apostle Peter makes it clear that true Christians will have to deal with false prophets within their midst, not as some outside influence. For example, the apostle wrote: “However, there also came to be false prophets among the people, as there will also be false teachers among you. These will quietly bring in destructive sects, and they will even disown the owner who bought them, bringing speedy destruction upon themselves.” —2 Peter 2:1

Please note that Peter said there would be false teachers among you. And not only that, but they would bring destruction upon themselves, even as the son of destruction. Furthermore, the apostle went on to say: “Also, they will greedily exploit you with counterfeit words. But their judgment, decided long ago, is not moving slowly, and their destruction is not sleeping.”

Peter did not say the false teachers will merely try to exploit you. He foretold that they will succeed in greedily exploiting you with counterfeit words. This parallels with what Paul wrote concerning the man of lawlessness. Surely, those who announce that Jesus has already come employ the use of counterfeit words to pass off as the currency of “our present understanding.” 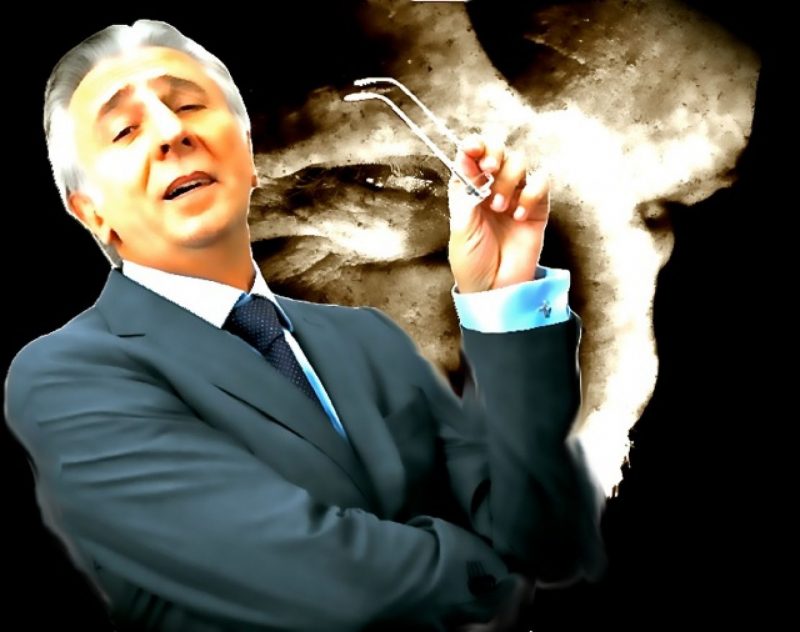 The man of lawlessness runs an operation of Satan

Given the fact that the Watchtower has always promoted a false parousia, what should we expect when Christ actually comes? More deception, what else? That is why Jesus also sternly forewarned us about a great deception that would be in operation then. In fact, Jesus prefaced his prophecy of the conclusion by saying: “Look out that nobody misleads you, for many will come on the basis of my name, saying, ‘I am the Christ,’ and will mislead many.”

What is the man of lawlessness if not a false Christ? Surely, his sitting down in the temple of God and exalting himself above every god will involve declaring himself to be the Christ. That is why Jesus went on to say: “Then if anyone says to you, ‘Look! Here is the Christ,’ or, ‘There!’ do not believe it. For false Christs and false prophets will arise and will perform great signs and wonders so as to mislead, if possible, even the chosen ones. Look! I have forewarned you. Therefore, if people say to you, ‘Look! He is in the wilderness,’ do not go out; ‘Look! He is in the inner rooms,’ do not believe it. For just as the lightning comes out of the east and shines over to the west, so the presence of the Son of man will be. Wherever the carcass is, there the eagles will be gathered together.” —Matthew 24:23-28

Jehovah’s Witnesses would do well to consider the fact, that —as the day’s text states —Satan is at war with God’s chosen ones, how would it be possible for them to be deceived by the clergy? The clerics of Christendom have no influence over Jehovah’s Witnesses. The fact is, the operation of Satan has already produced great signs and wonders; such as conjuring WWI and the outbreak of the Spanish Influenza and the persecution of the Bible Students to coincide with the mystical seven times chronology the Watchtower has fabricated.

But just as Satan entered into Judas when Jesus handed him the morsel, thus beginning the hour of the authority of darkness, we may expect the masonic agents within the Watchtower to take their deception to a whole new level when once the signs of the conclusion begin to display themselves; namely, nation rising against nation, etc.

The price of energy from all sources conventional is exploding globally. Far from accidental, it is a well-orchestra...

MANHATTAN, New York—What was initially a crowd of hundreds protesting against vaccine mandates and biased media had grown ...

Not the Onion or Babylon Bee. Super insanity

The deputy secretary at the US Treasury has put Americans on notice that the only way to end the plague of e...

Allegations also say other elders threatened to sue family of victim if they referred abuse complaint to law enforcement.

...from complications from COVID-19...he was fully vaccinated.

Video footage of Melbourne police checking whether a man’s coffee cup was empty to verify his excuse for not...