Ezekiel’s Chariot – What Does It Symbolize?

Ezekiel’s Chariot – What Does It Symbolize?

The April 2013, Watchtower Magazine carries an article with the scriptural title: “Make Sure of the More Important Things,” which  tangentially invokes the vision of Ezekiel regarding the  extraterrestrial chariot – the intent being, to impress upon Jehovah’s  Witnesses the reality of the existence of “the invisible part of  Jehovah’s organization.”

The article reinforces the belief among Jehovah’s Witnesses that the visible and the invisible are inseparably linked. In fact, it is presumed that the leadership of the earthly, visible organization (so-called), is somehow in lockstep with the colossal celestial chariot; with its immense, revolving wheels within wheels with rims full of eyes; flashing lightning, glowing electrum; strange and wonderful multi-headed living creatures with four wings, and its gloriously enthroned rider above the sparkling chrysolite. And it is the responsibility of every publisher-card-possessing Jehovah’s Witness to keep pace with the invisible chariot as it moves this way and that above the earth.

But what does Ezekiel’s rapturous vision of the chariot ultimately represent? Is it merely an in descript, invisible organization in heaven that God presides over, which directs the affairs of God’s servants on earth, as the Watchtower has taught since 1929? And what is the significance of the chariot’s movements in relation to the earth?

When Ezekiel was originally commissioned by Jehovah to serve as a watchman the city of Jerusalem was the only place on the entire earth where God had attached his holy name. Originally, through Moses God had organized a system of worship centered around a portable tabernacle, and later a magnificent stone temple built upon the highest pinnacle of Jerusalem, where Jehovah decreed he would establish his earthly presence. God even miraculously caused his invisible presence to be manifested within the Most Holy compartment in the phenomena called the Shekinah light. You might say that the temple and priests and the Jews who worshipped in Jerusalem made up the visible part of Jehovah’s organization.

Born into a priestly family in Judea, Ezekiel, whose name means “God strengthens,” would have served at the temple in Jerusalem had he not been taken into exile to Babylon, along with King Jehoiachin and others of the upper class. It was there in Babylon, by the river Chebar, where Ezekiel saw in vision the awesome, heavenly chariot as it emerged from the roiling, fiery storm clouds to the north.

As Jehovah’s Witnesses ought to know, although the prophets had an immediate message for the ancients, because they were inspired of God – whose living word endures forever – the prophetic word is more especially intended to reveal Jehovah’s judgments to the moderns.

As Revelation states, “the bearing witness to Jesus is what inspires prophesying,” the reverse is true as well; namely, that the inspired prophetic word is what bears witness to Jesus. But before Christ was manifested in the flesh the sacred secret remained, well, secret. With the coming of Christ, it was revealed that Jesus is the appointed king and judge of all mankind. And because of his obedience and faithfulness to God under test Jehovah has exalted his beloved son to his very throne.

In the 1st chapter of Hebrews Paul explained Jesus’ position relative to God, saying: “He is the reflection of his glory and the exact representation of his very being, and he sustains all things by the word of his power; and after he had made a purification for our sins he sat down on the right hand of the Majesty in lofty places.”

Paul went on to write: “For example, to which one of the angels did he ever say: ‘You are my son; I, today, I have become your father’? And again: ‘I myself shall become his father, and he himself will become my son’? But when he again brings his Firstborn into the inhabited earth, he says: ‘And let all God’s angels do obeisance to him.’ Also, with reference to the angels he says: ‘And he makes his angels spirits, and his public servants a flame of fire.’ But with reference to the Son: ‘God is your throne forever and ever, and the scepter of your kingdom is the scepter of uprightness.’”

Although the empty-headed Trinitarian cultists suppose God obeys himself and rewards himself for his obedience with something he has always possessed, Jehovah’s Witnesses know better. But do Jehovah’s Witnesses fully appreciate that Christ is now the very reflection and the exact representation of Jehovah’s very being and that Jehovah has committed to giving his son his own throne, and not only that, but God will require every knee to bend in the worship of his son, including the angels?

Returning now to the vision of Ezekiel, is it possible that Jesus Christ is represented by the “someone in appearance like an earthling man” seated upon the throne, who bears “the likeness of the glory of Jehovah”?

Of course, Jesus Christ was not enthroned when Ezekiel received the vision. That is why Ezekiel recognized the one on the throne as  “the God of Israel.” But even at that, it was revealed to Daniel that Michael the archangel is the great prince who stands with God’s people.  And keep in mind that Ezekiel received a series of reoccurring visions throughout his lifetime, the last one culminating after the execution of Gog in the final part of the days, when God’s temple sanctuary is finally brought into its right condition, which had no ancient fulfillment and obviously has to do with the coming of Christ in the name of Jehovah.

The question of the identity of the person enthroned upon the chariot is all the more pertinent when we consider certain similarities to the visions of Revelation. Most noteworthy, in Ezekiel’s vision the one seated upon the throne had the appearance of fire, with a majestic rainbow above him. In the 4th chapter of Revelation God is similarly portrayed. However, in the 10th chapter of Revelation a certain “strong angel” is also described as having a face as radiant as the sun and having legs of fire and a rainbow above his head. We recognize the “strong angel” to be none other than Jesus Christ when he takes up his authority on the earth. The fact that he is described as having the same glorious appearance as God confirms that Jesus is indeed the very reflection and exact representation of Jehovah himself.

In Ezekiel the one seated upon the throne hands the awestruck prophet a scroll containing dirges and commands him to ingest it. The “strong angel” similarly commanded the apostle John to eat a little scroll that was handed to him. The similarity of the two visions would seem to indicate that the one seated upon the chariot is Christ.

Also, although God is described in anthropomorphic terms he is never called an earthling man. That is appropriate since God has never been such. However, as regards the one seated on the mobile throne Ezekiel wrote: “And upon the likeness of the throne there was a likeness of someone in appearance like an earthling man upon it…”

Jesus was, of course, a flesh and blood earthling man, which is why Christ always referred to himself as the Son of man. And in the prophecy of Daniel, it is the Son of man who gains access to the Ancient of Days and rulership, dignity and the kingdom are conferred upon him. Even though the Son of man is no longer an earthling man it is fitting for him to be depicted in prophecy as a man because it was his willingness to suffer and die as a man that brought him Jehovah’s unreserved blessing.

Furthermore, in the visions in Isaiah, Daniel and Revelation, Jehovah’s throne is always in heaven. But obviously the vision Ezekiel experienced depicted the throne moving about in the lower regions of the spirit realm – in the vicinity of the earth. This seems intended to portray the second coming of Christ as King of God’s kingdom with all his angels with him supporting him upon his glorious throne.

Some seven years after Ezekiel witnessed the original appearance on the banks of the Chebar he was levitated by the spirit to Jerusalem and the temple, where he again saw the cherub-powered throne ominously positioned and the voice of the one seated on the throne commanded a certain man clothed in linen to collect the fiery coals within the wheelwork and toss them over the city like firebombs. That signified the utter destruction of Jerusalem and the temple. 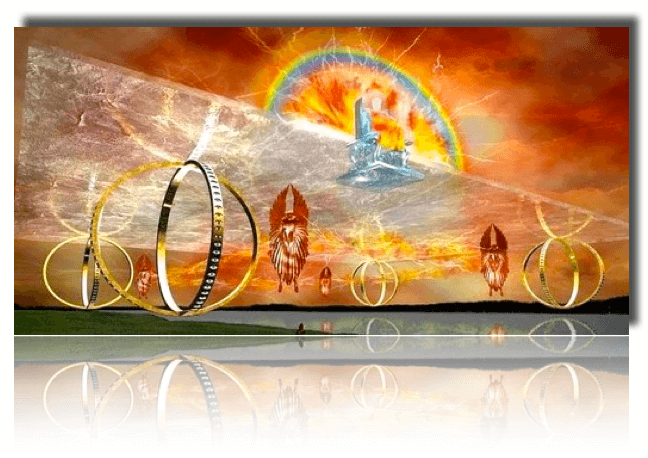 The Biden administration is very close to handing the World Health Organization power over every aspect of your life. Imagine the civil liberties abuses of the Covid lockdowns, but permanent.