The Day the Stars Fall from Heaven

The Day the Stars Fall from Heaven

With the recent developments in Ukraine, developments intended by the Empire to push Russia into war, a war that will unavoidably go nuclear, it seems timely to consider the phenomenon known as EMP (Electromagnetic pulse).

Since the USSR was disbanded 20-some years ago the defensive posture of the Anglo-American powers has subtly shifted from defensive to offensive. The MAD (Mutually Assured Destruction) doctrine that kept the world’s nuclear powers from open conflict has been discarded – replaced by the supposed feasibility of a sudden, decapitating first strike.

To that end in 2009 a new branch of the US Air Force was put into operation called Global Strike Command (YouTube promo). It puts the most powerful weapons in existence into a state of readiness and under the command of generals on the ground, who are pre-authorized to use them. Global Strike bases are situated around the world, so that no place on earth is more than an hour away from total devastation. Even more disconcerting, as a demonstration of the depth of the Anglo-American alliance, Britain has access to the US nuclear trigger.

In a first strike scenario cities and population centers are not necessarily targeted, only the ballistic missile facilities of an enemy. And if the enemy is capable of getting any missiles off the anti-missile missiles that comprise a so-called missile shield are supposed to neutralize them.

What used to be appropriately considered madness is what is now driving the Anglo military into an open conflict with nuclear-armed Russia and China.

At any rate, we may be assured that Jehovah God will not allow a full-on nuclear exchange, since there would be no survivors of such an encounter. However, it seems quite likely that he will allow a limited thermonuclear war, otherwise known in the Scriptures as a great tribulation, which Jesus foretold God will cut short – else no flesh would survive.

While the war planners are far along in their scheme to overthrow various countries, like Iraq, Libya and Syria, and most recently Ukraine, for the purpose of encircling Russia, it ought to be pointed out that it only takes one missile bearing only one nuclear warhead, detonated at high altitude, to destroy a nation. The explosion would not even harm people on the ground, but the blast would emit an intense electromagnetic pulse that could fry virtually all electrical equipment. EMP has the potential to simply turn off civilization like a light switch.

There is no question that the potential is there. And there is no doubt that any move by Global Strike would elicit an immediate EMP attack, perhaps launched from nuclear submarines that continually prowl under the seas undetected. While very few leaders, media outlets or anyone else, is speaking about the looming prospect of a nuclear war, nonetheless, various “experts” have warned about the possibility of an EMP attack by terrorists or a so-called rogue nation. In any case, the question is: Will Jehovah allow something that devastating to occur? The answer is yes, apparently. How do we know?

Well, obviously when the Bible was written hundreds of years ago there was no complex electrical grid, but many of the prophets foretold a strange phenomenon would occur, whereby, the glowing sun would turn dark, the silvery moon would not shine and the stars would fall from the very sky. Jesus, himself, used this phraseology when speaking about the globe-engulfing tribulation that would come as a result of his return.

Of course, we know that the sun is not literally going to go dark, nor are the billions of suns in the vast cosmos going to fall. (Where would they fall?) However, there are several possibilities. (An intense solar flare could also create an EMP disaster, but it is more likely to come from an act by man.)

One, even a limited nuclear war would eject millions of tons of dust, smoke and debris high into the atmosphere, literally blotting out the light received on earth from the various heavenly luminaries. (Even the eruption of a supervolcano – such as the Yellowstone caldera – could cause the same effect.)

Secondly, the prophets may be referring to the phenomenon created by an EMP attack; whereby, the sudden plunge into darkness will seem as though the heavenly bodies have been snuffed out.

The fact that civilization is so vulnerable to the sudden loss of electricity, and that the nations are irresistibly being drawn into what appears to be an inevitable world war, ought to cause Jehovah’s Witnesses to give some thought to what the following verses mean:

Before them the land trembles and the heavens rock. Sun and moon have become dark, and the stars have lost their brightness. Jehovah will raise his voice before his army, for his camp is very numerous. For the one carrying out His word is mighty; for the day of Jehovah is great and very awe-inspiring. Who can endure it?” – Joel

“And when you are extinguished I will cover the heavens and darken their stars.

I will cover the sun with clouds, and the moon will not give its light.

I will darken all the shining luminaries in the heavens because of you,

And I will cover your land with darkness,’ declares the Sovereign Lord Jehovah.” – Ezekiel

“Look! The day of Jehovah is coming,

Cruel both with fury and with burning anger,

To make the land an object of horror,

And to annihilate the land’s sinners from it.

For the stars of the heavens and their constellations

Will not give off their light;

The sun will be dark when it rises,

And the moon will not shed its light.” – Isaiah 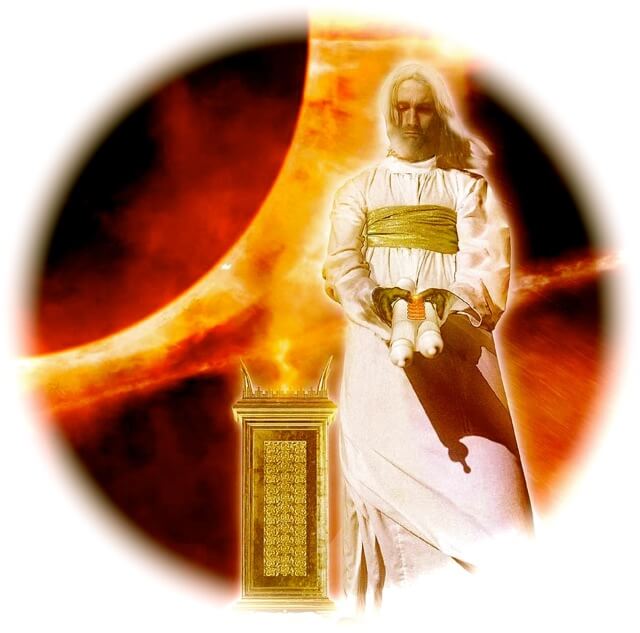 “Also, there will be signs in the sun and moon and stars, and on the earth anguish of nations not knowing the way out because of the roaring of the sea and its agitation. People will become faint out of fear and expectation of the things coming upon the inhabited earth, for the powers of the heavens will be shaken.” – Jesus

“And I saw when he opened the sixth seal, and a great earthquake occurred; and the sun became black as sackcloth made of hair, and the entire moon became as blood, and the stars of heaven fell to the earth as when a fig tree shaken by a high wind drops its unripe figs. And the heaven departed as a scroll that is being rolled up, and every mountain and every island was removed from its place.” – Revelation

POST SCRIPT: It is possible to protect electrical devices from an electromagnetic pulse – It is called “hardening.” And the militaries of the world have hardened vital facilities from such an attack. That would mean the military would be the only part of society that would function in a post EMP world.