Do not throw away your freeness of speech

Do not throw away your freeness of speech

Jesus personally invited some men to be his followers. And they immediately responded and followed him—quite literally. They literally walked behind him as Christ traveled the countryside and visited villages, preaching and healing the sick. They followed him right up to the moment Jesus was arrested in the Garden of Gethsamane, at which point they all stumbled and were scattered. How could the king of Israel be hauled off and executed like a common criminal?

Not only did they not know the Scriptures; they could not even understand Jesus’ plain, straightforward statements regarding his mission and destiny. Even though they had direct access to the Son of God and could ask him any question they wished they were blind to what is now regarded as basic Christian doctrine; namely, the death and resurrection of Christ.

Jesus informed Peter moments before his arrest that Satan had demanded to have them sift them as wheat. In other words, their faith would be tested. That is why Jesus did not disabuse them from their ignorance. They had to work through it for themselves. Either Jesus was the Son of God or he wasn’t. It shouldn’t have mattered if things didn’t work out according to their preconceived notions.

We face a similar sifting. Jesus warned of the hour of test coming upon the world. Satan is still very much the god of this world and the issues are the same as when Satan appeared before Jehovah to accuse Job. The Devil is our accuser too, who accuses us night and day before God. Either we have faith or we don’t. Hopefully, we do. And that is something to build upon.

We are confident that the controversy regarding Jehovah’s character and sovereignty will be completely resolved, and soon. Central to the accomplishment of God’s purpose is the preaching of the good news and the calling and choosing of the last members of the 144,000 Kingdom heirs. Regarding this, Paul wrote to the Philippians: “For I am confident of this very thing, that the one who started a good work in you will bring it to completion until the day of Christ Jesus.” — Philippians 1:6

In the same first chapter, Paul referred to the day of Christ a second time, saying: “And this is what I continue praying, that your love may abound still more and more with accurate knowledge and full discernment; that you may make sure of the more important things, so that you may be flawless and not stumbling others up to the day of Christ…” (1:9-10)

What is the day of Jesus Christ? The Watchtower says that the day of Christ began in 1914, otherwise known as the Lord’s day and day of the Lord. Admittedly, the Governing Body has said precious little about it. In fact, you might draw a quizzical look from Jehovah’s Witnesses if you ask them about the day of Jesus Christ. It is just not something that is considered deeply.

But obviously, it cannot possibly be true that the day of Jesus Christ began in 1914. Did God’s project come to completion then? Hardy. The final phase of preaching the Kingdom to the world was just beginning then. And besides, have not untold numbers of Christians been stumbled over these many decades since 1914? No doubt. But if the day of Christ had actually begun in 1914, indeed, if 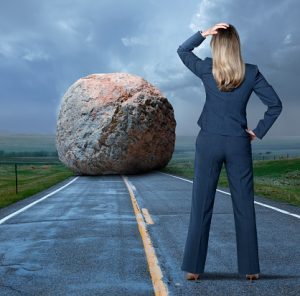 the concluding harvest had commenced then as the Watchtower ardently proclaims, there would be no more stumbling blocks. That is because Jesus assured us that during the harvest the angels will be dispatched to remove all things that cause stumbling. The irony of ironies, the Watchtower’s sacred 1914 cornerstone is a Gibraltar-size stumbling block!

Since the Watchtower itself was built upon a false foundation, what will become of the millions of persons who have rested their faith upon the assumed infallibility of the Governing Body and their teachings when the actual day of Christ commences? Sadly, the words of Jesus are certain to be fulfilled then: “Many will be stumbled.”

As regards those who have erected and maintained the wall-like doctrine that Christ returned in 1914, which is a lie, this is what Jehovah has said concerning them: “You will not go to the broken places in the stone walls to rebuild them for the house of Israel, so that Israel may keep standing in the battle in the day of Jehovah. They have seen false visions and foretold a lie, those who are saying, ‘The word of Jehovah is,’ when Jehovah himself has not sent them, and they have waited for their word to come true.” — Ezekiel 13:5-6

The 23rd chapter of Jeremiah outlines how God will demand to have his sheep back from the shepherds to whom he had entrusted his sheep. In verses 21 and 22 God states the same thing as he did in connection with the stupid prophets: “I did not send the prophets, yet they ran. I did not speak to them, yet they prophesied. But if they had stood in my inner circle, they would have made my people hear my words and would have caused them to turn back from their bad way and their evil deeds.”

Perhaps some may be inclined to suppose that the denunciation of the negligent shepherds only applied to ancient times. As if to dispel that notion Jehovah locates the fulfillment in the final part of the days. “For who has stood in the inner circle of Jehovah to see and hear his word? Who has paid attention to his word in order to hear it? Look! The windstorm of Jehovah will burst out in fury; like a whirling tempest it will whirl down on the head of the wicked. The anger of Jehovah will not turn back Until he has carried out and accomplished the intentions of his heart. In the final part of the days you will clearly understand this.”

Has the Governing Body “paid attention to his word in order to hear it”?

Just knowing the condition of the dead and that hell is not hot isn’t enough. Why has the exalted faithful and discreet slave not discerned what the day of Jesus Christ is? Why is someone like myself—deemed as an apostate enemy of the truth—aware of these simple things and the self-declared mouthpiece of Jehovah

Why has God poured the spirit of deep sleep upon the seers and visionaries—the so-called watchman class? We may be sure it is because Satan has demanded to sift you as wheat too. And a sifting is sorely needed. In fact, it is imperative. The reason is that the real apostates, the spawn of Satan himself, have disguised themselves as apostles of Christ. “…For from the prophets of Jerusalem apostasy has spread throughout the land.” — Jeremiah 23:15b

Since all these things are destined to occur what can you do? Paul wrote his letter to the Hebrews, especially those who were living in Jerusalem prior to the siege, reminding them that they did not have a city (Jerusalem) they would remain. In other words, Paul was exhorting them not to get too attached to what had at one time been Jehovah’s earthly organization, to borrow a phrase.

If an elder or servant were to step down they would likely lose a certain amount of freeness of speech. Needless to say, if someone leaves the congregation altogether they will be throwing away their freeness of speech toward fellow believers. Right or wrong those who leave, whether through formal disassociation or by just going dark, are viewed as being spiritually weak or even as apostates.

Yeah, but what good is having freeness of speech if you are not free to speak to fellow believers about what is really going on? That is where love and faith come into play. If you believe the day of Jesus Christ is going to come like a furious windstorm an opportunity will arise then to speak about the forbidden truth. Then many will listen. That is why Paul said that freeness of speech “has a great reward to be paid it.”

Jesus advised his disciples to be on guard against men. What kind of men?

Unbelievers? No. Jesus forewarned that he is “sending you out as sheep among wolves; so prove yourselves cautious as serpents and yet innocent as doves. Be on your guard against men, for they will hand you over to local courts and they will scourge you in their synagogues.” — Mathew 10:16-17

The wolves are the guardians of the synagogue. During the conclusion, truth-tellers will be thrown from the Christian congregation. That will be an honor then. Now? Not so much. So, that’s a good enough reason not to throw away your freeness of speech before payday!