Man of Lawlessness and the Deluding Influence

Man of Lawlessness and the Deluding Influence

In the parable of the talents, Jesus clearly reveals an obligation resting on his anointed followers. We need to understand the meaning of this parable, for it affects all true Christians, whether they have the hope of a heavenly reward or of an earthly one. Jesus gave the parable of the talents as part of the answer to his disciples’ question about “the sign of his presence and of the conclusion of the system of things.”  Thus, the parable finds its fulfillment in our time and is part of the sign that Jesus is present and ruling as King. The parable of the talents is one of four related illustrations recorded at Matthew 24:45 to 25:46. The other three—about the faithful and discreet slave, the ten virgins, and the sheep and the goats—are also part of Jesus’ answer to the question about the sign of his presence.

The Watchtower has been the source of a deluding influence, first over the so-called Bible Students, and now over Jehovah’s Witnesses. There is no possible way to break the grip it has on the minds of the many for the reason that it is “an operation of Satan” that Jehovah himself has allowed.

What is the purpose of it? The apostle explains:

“That is why God lets a deluding influence mislead them so that they may come to believe the lie, in order that they all may be judged because they did not believe the truth but took pleasure in unrighteousness.”

God lets a deluding influence mislead Jehovah’s Witnesses as a prelude to the judgment. Anointed, other sheep — makes no difference. They are, one and all, laboring under the delusion and believing the lie. The judgment is what will commence when Christ returns and begins his presence.

The context of Paul’s remarks reveals that the deluding influence, although it is “an operation of Satan,” emanates from an earthly entity known as the man of lawlessness —a.k.a. the son of destruction. This agent of Satan promotes a fake parousia. That is why Paul warned the brothers not to believe authoritative proclamations announcing that the presence has begun and the day of Jehovah is here. However, the significance of the promulgation of a lie concerning the parousia having already begun is that it is a necessary prelude to the actual parousia. And it is the manifestation of Christ that will do away with the man of lawlessness and those who faithlessly follow him after the real presence begins.

Now as regards today’s text. The aforementioned “lie” is right there. Here it is again, isolated below in case you did not detect it:

Thus, the parable finds its fulfillment in our time and is part of the sign that Jesus is present and ruling as King. 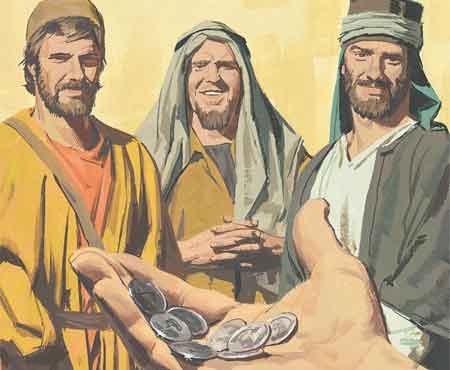 On the one hand, the Watchtower claims that Jesus’ presence began in 1914. But over the past few years all the parables (except the wheat and the weeds and the dragnet) that previously had been declared to have been fulfilled back in 1918 have now been moved forward, to a future day of fulfillment. But in order to retain the 1914 delusion, the Watchtower has been compelled to teach that even though the principle that judgment starts with the house of God first is well established in the Scriptures, Jesus is coming again, supposedly during the tribulation, to settle accounts with his slaves.

Of course, the Watchtower also teaches that Christ came in 1914 as the messenger of the covenant and judged the house of God then too. But Bethel is safe, for now —at least as far as the deception being found out. Their legerdemain is unlikely to be discovered by Jehovah’s Witnesses –unless someone is especially discerning.

But what is the truth? Does Jesus judge his slaves at the beginning of the parousia —as the Watchtower used to teach —or at the end, during the globe-rocking holocaust known as the great tribulation? And does it make any difference?

The answer is: Jesus settles accounts with his slaves when he returns and begins his presence with them. That is evident from reading the 12th chapter of Luke, which is a much more detailed discussion regarding the faithful and unfaithful slaves, which, by the way, the WT seldom cites. But in that discussion with his disciples, Jesus stressed the importance of their staying awake and in expectation of the coming of the master. And those whom the master finds to be ready and wakeful Jesus said: “Happy are those slaves whom the master on coming finds watching! Truly I say to you, he will dress himself for service and have them recline at the table and will come alongside and minister to them.”

As the WT has explained the Greek word “parousia“ literally means “being alongside.” And in the illustration regarding the coming of the master Jesus plainly said he “will come alongside” and minister to his slaves — that is, if he finds them watching. Yet, the Watchtower attaches no significance whatsoever to this passage.

So, in answer to the last question posed: does it make a difference? Absolutely! The 1914 delusion has ensured that Jesus’ coming will be totally unexpected. Or, as the Lord himself went on to say: “But know this, if the householder had known at what hour the thief would come, he would not have let his house be broken into. You also, keep ready, because at an hour that you do not think likely, the Son of man is coming.”

Sure Christmas is a pagan holiday, characterized by obscene excesses, but still, it is perceived as a sacred Christian holiday

The apparent success of Trump's unprecedented Warp Speed vaccine project can't be happy news for those working to exploit the pandemic for maximum suffering.

Moderna says it's preparing global launch of Covid vaccine as it takes in $1.1 billion in deposits

Moderna is prepping for the global launch of its potential coronavirus vaccine, already taking in $1.1 billion in deposits from governments.

Used to be the Watchtower would not allow JW's to accept alternative service. It was considered a compromise. I guess the hardliners are all gone now via @FRANCE24

Someone sent me a link to this. Pretty cool. The lookouts, also known as watchmen, often built towers or booths from where they would keep an eye out for any and all comers. It's where the Watchtower got its name, obviously #FoxNews

Soldiers at a paratrooper base in Southern Israel have uncovered a Biblical-era watchtower.

The White House responded with offers of federal assistance...