The Day of the Great Slaughter

The Day of the Great Slaughter

There will be great tribulation such as has not occurred since the world’s beginning until now, no, nor will occur again.—Matt. 24:21.

The earthly part of Jehovah’s organization is moving ahead in various ways. For instance, our understanding of Bible truth is constantly becoming clearer. This is to be expected, for “the path of the righteous is like the bright morning light that grows brighter and brighter until full daylight.”  But we might well ask: ‘Am I keeping pace with refinements in our understanding of Scriptural truth? Is it my custom to read the Bible daily? Am I an avid reader of our publications? Do I and my loved ones have a weekly Family Worship evening?’ Most of us will agree that it is not too hard to do these things. Often it is just a matter of setting aside time to do them. And how important it is to take in accurate Scriptural knowledge, apply it, and make spiritual progress—especially now that the great tribulation is drawing so close!

A century ago the First World War was grinding on. It was fought for the most part in France —in muddy trenches and in the North Atlantic. Great killing contraptions made their debut then. The tank. The airplane. Massive battleships. The bi-planes were so rickety they didn’t even carry bombs. Pilots used to fly over targets and drop hand grenades out of their open cockpit.

Unfortunately, World War Two was much more destructive —ending with the first ever detonation of two atomic bombs on the Japanese cities of Hiroshima and Nagasaki. That event ushered in the atomic age. Since then many nations have developed nuclear weapons, some many times more powerful than the “Little Boy” and “Fat Man”  bombs exploded over Japan in 1945. However, scientists have more recently developed miniaturized nuclear bombs that are very portable —mini-nukes, they are called. They can fit into a suitcase and be detonated virtually anywhere. Because of their portability they present a greater danger than the city-destroying nuclear warheads.

This is the world in which we now live.

Although no one knows the day or hour, now that the so-called Trans-Atlantic financial system is on the verge of a catastrophic blowout, the fragility of the gambler-run, debt-gorged system being demonstrated with the recent seemingly innocuous Brexit vote that sent stock markets and currencies plunging to the tune of out wiping $2 trillion in fictitious assets in just a few hours, the Anglo-American beast is intent on provoking war with Russia and China to prevent the BRICS alliance from being the new global power.

More then a few people who are aware of the peril posed by the present crisis have expressed alarm that we on on the verge of another world war. Except this isn’t 1914 or 1945. All the nations involved in the war provocations possess vast arsenals of nuclear weapons and sophisticated methods of delivery.

So let’s be frank: The world’s greatest time of distress, the likes of which have never occurred before or will ever occur again afterwards —a tribulation so severe it will require divine intervention to save mankind from extinction —can only be a nuclear conflagration. That is why the tribulation could not have occurred anytime before the advent of the nuclear age.

JEHOVAH’S WITNESSES AND THE GREAT TRIBULATION

As for the refinements in understanding the Watchtower boasts about making, such are very trivial compared to the vast error that the organization embraces. For the most part the Governing Body have set Bible prophecy aside. Jehovah’s Witnesses have been led to believe that everything has all been fulfilled except the great tribulation, which supposedly begins when the United Nations turns upon Babylon the Great.

In the first phase of that tribulation, God will move the political rulers of this world to destroy “Babylon the Great,” thus showing his contempt for that religious harlot.  Then, in the war of Armageddon, the final phase of the great tribulation, Jehovah himself will wipe out the rest of Satan’s world. – Watchtower 7-15-2010

I have heard some of Jehovah’s Witnesses speculate that false religion might be taxed out of existence. But if that were the case, why would it be necessary for God to cut the tribulation short for the sake of the chosen ones, or else no flesh would survive? I have heard of being taxed to death, but that is just a figure of speech.

“The breakdown of his people” has not taken place yet. The severe blow Jehovah inflicts is yet to come. It is the tribulation. The verse preceding in Isaiah refers to it as “And on every tall mountain and on every high hill will be streams and watercourses, in the day of the great slaughter when the towers fall.”

Most assuredly among the towers destined to fall in that day will be the Watchtower. That will be as a result of the “blow he inflicted.”

As a demonstration of Bethel’s blindness and dishonest method of interpretation, in their supposed verse-by-verse commentary on the prophecy of Isaiah the Society only quotes the first half of the verse above and conveniently omits any mention of ‘the day of great slaughter when the towers fall.’ Furthermore, to put a happy spin on the day Jehovah heals the severe wound he inflicts upon his people the Isaiah commentary states:

What a thrilling climax to this brilliant prophecy! The glory of God will shine forth in all its splendor. The blessings in store for God’s faithful worshipers will exceed vastly—sevenfold—anything that they have experienced before. 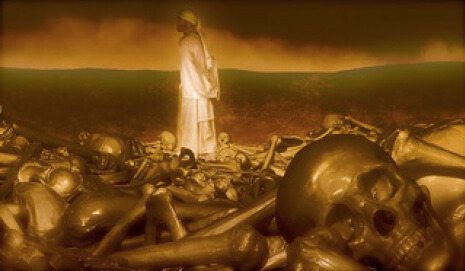 The great slaughter to come will undoubtedly result in the deaths hundreds of millions, if not billions. Population reduction has long been the official policy of the British Empire. Through London’s insidious influence over America the US has now adopted the Malthusian outlook. And the United Nations’ Agenda 21 is the framework of global genocide.

Although the ignorant Jehovah-haters have accused God of intending to inflict genocide, in reality it is Satan the Devil, who, as Jesus said, ‘was a murderer when he began,’ who is the chief sponsor of the policy to reduce the world’s population by 80%. There is no reason to believe that Jehovah will prevent the god of this world from implementing his wicked scheme to destroy mankind. Truth be known, it is what the prophecy of Habakkuk is detailing. It is during that time of certain death when Jehovah will become the Savior of the faithful.

The as-of-yet-still-sealed-up prophecy of Daniel confirms the above —foretelling that the king of the north will launch a global genocidal campaign. Here’s is what the Bible says is going to occur: “But reports out of the east and out of the north will disturb him, and he will go out in a great rage to annihilate and to devote many to destruction. And he will plant his royal tents between the grand sea and the holy mountain of Decoration; and he will come all the way to his end, and there will be no helper for him. During that time Michael will stand up, the great prince who is standing in behalf of your people. And there will occur a time of distress such as has not occurred since there came to be a nation until that time. And during that time your people will escape, everyone who is found written down in the book.”